I recently picked up a copy of each of the two volumes of ‘Permanent Way‘ written by M.F. Hill and published in 1949. The first volume [1] is a history of ‘The Uganda Railway’ written in the 1940s when the railway company was known as ‘The Kenya and Uganda Railways and Harbours’ and published at the end of that decade under the jurisdiction of the new ‘East African Railways and Harbours’ which was formed to formally include the infrastructure in the modern country of Tanzania.

Hill’s first volume provides a detailed history of the Uganda Railway until just after the end of World War II.

Previous articles in this series based on Hill’s 1949 book are:

The Great Depression and the Pre-War Years

This article covers the final period between WW1 and WW2. Despite the title of this chapter in Hill’s book which refers to years of argument, these notes focus on the railway rather than on the political machinations of the time.

“Towards the end of 1928, the representatives of the Kenya and Uganda Railways and Harbours and of the Tanganyika Railways met in Nairobi to consider ways and means of securing an assimilation of the traffic of the two systems.” [1: p 476]

The two railway systems abandoned preferential rates for local produce [1: p476] and arranged for the through booking of passengers and goods [1: p477]

Throughout 1928 and 1928, the development and improvement of the railway made good steady progress. Twelve Mikado engines, pictured below, arrived, along with 3 modified corridor coaches. [1: p477]

The East African Railways and Harbours Magazine carried a single page article on the Class 28 locos in 1955. [4]

Mombasa to Nairobi replacement of rails was completed in February 1929. Between M’bulamuti and Namasagali two additional sleepers per length of rail were added to permit the use of larger locomotives. At Kilindini further improvements were made and a new tug was purchased. [1: p477]

Further extensions West from Kampala were under consideration. Survey parties looked at possible routes to the border with the Belgian Congo – South of Ruwenzori and South of Lake Albert. [1: p478] Revenue estimates were not possible without a clear commitment from the Belgian authorities. [1: p479]

“By the end of 1930 the days of inflation, the years of heavy loan expenditure and of soaring revenues were finished, and the railway was struggling to balance its budget by drastic economies which, in effect, added to the havoc of a vicious deflation. At that time, the total route mileage of open lines had increased to 1.557 miles and the route mileage on the Lakes to 3,246 miles. The railway’s expenditure on capital account amounted to £21,463,704 of which £13,097,160 was interest-bearing capital. … The annual loan charges borne by the railway amounted to £690,181 and they were still rising.” [1: p481]

From Autumn 1928 to the end of 1931 two plagues of locust devastated the East African economy. [1: p481/482] In tandem, the stock market collapse at the end of 1929 in New York led to international problems with deflation. There was a startling drop in the value of primary products on world markets. [1: p482]

East Africa was particularly susceptible to the combined problems of drought, locusts and economic disruption:

The situation in Kenya initially appeared different, heavy rains contributed to a sharp increase in the colony’s domestic exports by around £677,000, but by the following year they had fallen by over £1 million and they continued to drop. They’d sunk to £1,910,000 by 1931. Uganda’s exports had fallen in value to below £2 million. [1: p483]

Early in 1930, the important reduction of the 2% grade on the main line between Makupa and Mazeras to 1.5% was started. It was complete by November 1930 and included the provision of a spiral which lengthened  the line by 3/4 mile. [1: p501] 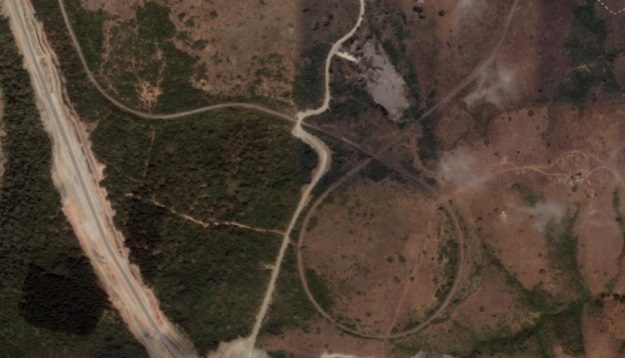 Nairobi-bound trains pass under the higher level of the spiral before then crossing over the lower line. Malcolm McCrow provides a few images from 1970s. [3]

In 1935, the surplus increased to £362,391. A succession of good cotton crops in Uganda contributed to the restoration of the railways finances. [1: p518]

In 1937, gross earnings of the railways and harbours reached a peak of £3.35 million and the surplus was £584,326, of which only £105,196 was carried forward, the remainder was committed to Betterment, the General Reserve, the Pensions Reserve, and depreciation. Hill provides a table which shows that 1937 compared well with 1929: [1: p524]

Throughout 1938 and 1939 railway policy was influenced by a growing recognition that another world war was inevitable. In September 1939, the General Manager wrote that “the railways and harbours had never been in a better position than they were in the September of 1939 to meet all the demands that might be made on them. In 1938 and 1939, the railway received a substantial reinforcement of new rolling stock, including 193 covered goods wagons,b115 open trucks and 35 third-class corridor coaches which were to prove invaluable for troop movements. Six new Garratt [EC3 Class] engines, built to specifications worked out by Mr. K.C. Strahan, the Chief Mechanical Engineer, and his staff, arrived in 1939 and proved a great advance on earlier types. The railway workshops were well equipped and the general stores position was satisfactory. In consequence, the railway was able to play an indispensable part towards the victory of the East African campaign and the maintenance of Kenya and Uganda’s economy,” during World War 2. [1: p526] 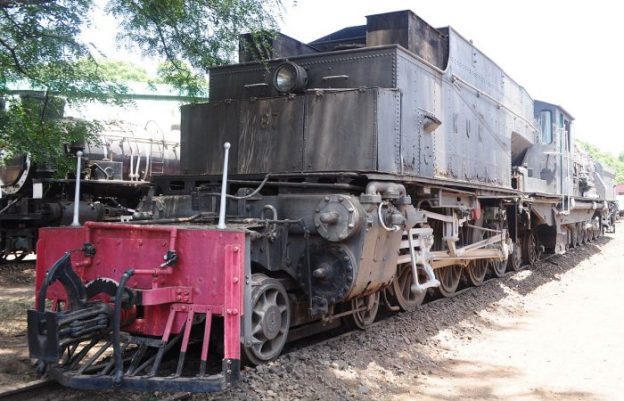 The KUR EC3 class, later known as the EAR 57 class, was a class of 4-8-4+4-8-4 Garratt-type articulated steam locomotives. The twelve members of the class were built by Beyer, Peacock & Co. in Manchester, England, for the Kenya-Uganda Railway (KUR). They entered service between 1939 and 1941, and were later operated by the KUR’s successor, the East African Railways (EAR) [5]