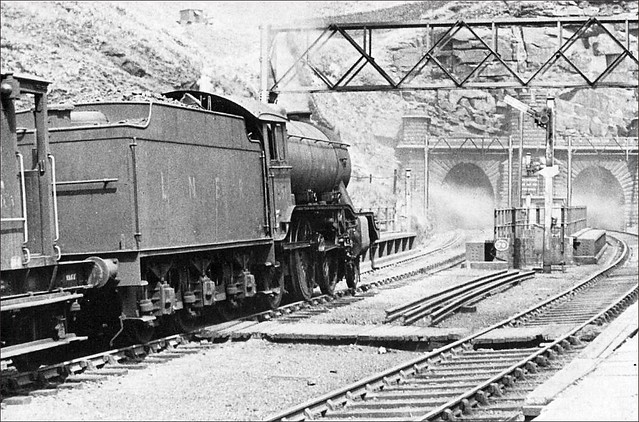 The following are links to information about the line which became part of the Manchester, Sheffield and Lincolnshire Railway in 1847:

The Sheffield, Ashton-under-Lyne and Manchester Railway features as the 17th of these and particularly for the construction of the Woodhead Tunnel. This was a project that exposed one particular company’s shocking attitude to the safety of its workers and it provided some significant impetus to campaigns for better working conditions for navvies.

“When the early transport ships bearing British miscreants to New South Wales landed in Australia, hundreds had perished during the voyage. The prisoners, including a few of those disreputable railway labourers, notorious for their hard drinking and fighting, were so crammed into the ships’ holds that they died. The British government ordered that, in future, the charterers be held responsible for the convicts’ well-being. It produced immediate results. The transporters, paid a bonus for every prisoner safely landed, now took care of their cargo,” (p72). 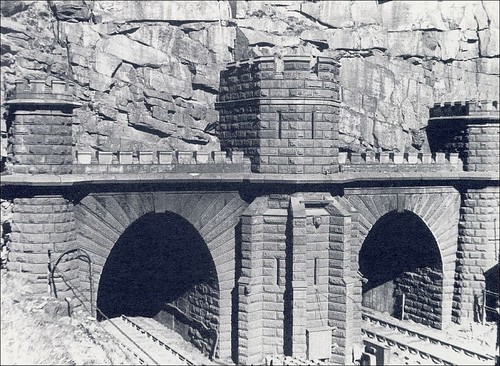 However, this principle of responsibility for one’s workers was usually ignore by Victorian entrepreneurs and business leaders: “What use had a mill owner for some eight-year-old girl who, through her own carelessness, lost her hand in a machine? Why should a railway company be responsible for a navvy’s family, when the man died, dead drunk, in a tunnel collapse? And why should the shareholder, risking his capital on such a brave enterprise as the Sheffield, Ashton-under-Lyne and Manchester Railway Company’s plan to tunnel under the Pennines, have to mollycoddle workers who were being paid to do their job?” (p72/73).

Wellington Purdon, who was assistant engineer on the tunnel, was asked by a government enquiry if it was not wiser to use safety fuses while blasting rock He replied, “Perhaps it is: but it is attended with such a loss of time, and the difference is so very small, I would not recommend the loss of time for the sake of all the extra lives it would save, ” (p73).

Purdon’s comments revealed how little the railway companies valued their workers. The enquiry and Purdon’s comments should have changed the course of industrial history. Instead, Parliament shelved the enquiry’s report.

In 1845 the first train through the completed Woodhead Tunnel was met by a celebration. However, the social reformer Edwin Chadwick did not celebrate for he had calculated that the rate of attrition on the contract to build the tunnel was the equivalent of losses incurred in war. “With 32 killed and 140 injured, the casualty rate was higher than in the Battles of Waterloo” (p73).

The navvies on the Woodhead Tunnel paid to keep their own doctor on hand, Henry Pomfret. “The chief engineer, Wellington Purdon’s boss was Charles B. Vignoles who was also a share­holder in the railway company. When the contract ran over time and over budget, the job bankrupted him. The pioneering engineer Joseph Locke took over as more than a thousand labourers hewed away at the muck and mud from seven different shafts, one at each end and five vertical shafts from above, with pick, shovel and explosives. It was obvious to Locke that the only way to complete the project was to drive the men like animals and, if questioned, lie” (p73/74).

The job took six years to complete. When it came to an end Dr. Pomfret talked to his friend Dr. Roberton, who, inturn talked to Edwin Chadwick. “In January 1846 Chadwick delivered a paper to the Manchester Statistical Society: The Demoralization and Injuries Occasioned by Want of Proper Regulations of Labourers Engaged in the Construction and Works of Railways. Despite the exhausting title, the contents were as volatile as navvies’ explosives. They revealed how injured men were forced to fend for themselves, how most workers lived in homemade hovels (occasioning an outbreak of cholera) through the worst of the Pennine winters. Chadwick exposed the practice of not paying wages for several weeks and then paying them in public bars. The pubs encouraged the navvies to drink their wages, while delayed payments forced them onto the truck system, a version of the company store principle that kept the men and their families in hock to the railway company. (The truck was already outlawed in Britain, but the statute, laid down before the railway rush, had not specified railway workers.) Chadwick showed how the reputation of the average navvy as a feckless, reckless drunk was a direct result of the industry plying him with booze instead of provid­ing him with proper food and housing” (p75).

“The rail company and the engineers denied the charges against them. Nevertheless, the government inquiry in July 1846 recommended extending the Truck Act to the railways, making the companies responsible for the health, welfare and accommodation of their navvies and, most important of all, putting the liability for deaths or injuries on the company. The Members of Parliament also insisted that men should be paid weekly, and in cash, not in tokens for the truck. The inquiry report was never even debated” (p75).

However, “although no railway man was censured over the Wood-head Tunnel scandal, Chadwick’s efforts were not in vain. His correla­tion between losses on the battlefield and those on the railways caught the public imagination and in future, when navvies were killed, the press was quick to take up the story” (p75).

Woodhead Tunnel is infamous for the loss of life during its construction, but it is nothing compared to the massive loss of life associated with many colonial railways in Asia, Africa and South America.

Sunday afternoon, July 13th, was St. Peter’s 46th Pet Service. There were some lovely pictures in the Manchester Evening News and the Tameside Advertiser about the service.  http://www.manchestereveningnews.co.uk/news/ashton-church-holds-pets-service-7440583

We had a great time!

This news is long overdue. I particularly enjoyed seeing colleagues from Manchester Diocese at General Synod so delighted with the outcome of the vote. This picture comes from a Guardian internet post on July 14th. It was entitled: “Clerics at the Church of England synod in York take a ‘selfie’ as they celebrate after the vote to allow female bishops.” Photograph: Lindsey Parnaby/AFP/Getty.

Applause in the public gallery at the meeting in York greeted the overwhelming vote in favour of the measure. With a two-to-one vote for the move needed, 152 lay members of the synod were in favour and 45 against. Majorities among bishops and clergy were even greater. These were the voting figures:

The Parish of the Good Shepherd in Ashton-under-Lyne has for a long time now been fully committed to the fullest expression of women’s ministry in the Church of England and is delighted to see the national church come to a very clear mind on the issue.

A listed building that once housed Ashton-under-Lyne’s swimming baths is to have a multi-million pound makeover.

£3m, or so will be used to restore the Grade-II* listed site which was built in Victorian times as a place for people to swim and bathe. Once complete it will be used as a hub for hi-tech businesses with a room reserved for community use in the roof, its crowning glory.

Deputy council leader John Taylor is in charge of the project which is being jointly funded by the European Regional Development Fund and Tameside MBC who are also waiting on a bid to the Heritage Lottery.

Property specialists from PlaceFirst, which acquired the building from Ask Developments, are inside now and hope to have completed the work by next July.

Coun Taylor said: “PlaceFirst specialise in restoring old buildings and bringing them back into use. They are looking at building a building inside it, like a pod, and that will be used by businesses. At the very top of the pod will be a community room and we are planning to form a trust so any rent that’s made will be put back into the trust for the maintenance of the building.”

The former baths on Henry Square, which has stood empty since closing in the 1970s, is one of the last buildings to be overhauled as part of the St Peterfield development. Despite the architectural treasures within, it currently looks poor on the outside.  which Coun. Taylor plans to change.

He added: “I have always been of the view that it’s an absolute eyesore on the entrance to our main town until I went inside. The roof is just stunning. The inside is about restoring the brickwork, the ironwork and the wooden beams, but to me the outside of the building needs just as much work doing on it to look as good.”

A spokesman for PlaceFirst said the company would be revealing more about their plans in the very near future.

Ashton-under-Lyne created one of the first and largest municiapal swimming baths They were opened in 1870 at a cost of just £16,000.

The idea of a public baths was first mooted in the 1840s. With bathrooms and even running water unheard of in many Ashton homes at the time, the author recommended that the terms of admission be “so low as to promote among all classes… the general practice of bathing”.

The local ‘Health of Towns’ committee applied to the Lord of the Manor for a grant but the scheme did not materialise until the late 1860s when the public baths was built.

Built in a Byzantine style, the baths had a 120ft tower which housed the flues from the steam boilers and heaters. The largest pool was 100ft x 40ft and was used mainly by male bathers. In the eastern section of the building was a smaller pool, 27ft x 15ft, for female bathers who could also use the bigger pool for a three-hour period on Thursdays.

During the winter months, when the main bath was closed, the smaller pool was used by men and women at different times. There were also private bathrooms and Turkish baths.

Part of the building was also used as a police station and a station for one fire engine.

Between November and March each year, the main pool was covered with a wooden floor, built on wooden supports placed on the bottom of the pool. The room was then used as a skating rink, concert hall and meeting room. The skating rink measured 116ft x 50ft with a raised stage area at one end and when chairs were set out, the ground floor and the spacious gallery could seat more than 4,000 people.

The building was closed when the newer baths were opened in the 1970s.

The old bus station will be pulled down and moved closer to the Metrolink stop to create a train, tram and bus hub for the town.

Ashton Bus Station, which is to be replaced by a £33m interchange

Plans to transform Ashton bus station into a £33m transport interchange have been revealed by travel bosses. The project will see the old station completely rebuilt and moved closer to the new Metrolink tram stop, providing better access between the two by the end of 2017.

With the newly redesigned train station opposite, Tameside Council says that the project will play a key part in the town’s regeneration.

Council leader Councillor Kieran Quinn said: “This is great news for Tameside as it means we are at the forefront of the key regional infrastructure projects earmarked as part of the Greater Manchester Growth Deal.

“Being one of the successful areas to get this funding, ensures Tameside does not miss out as this government starts to release vital resources for major infrastructure schemes, helping to bring economic spend to the county.”

Further details of the town’s hub come just days after the Greater Manchester Growth Deal, which set out a £470m investment partnership programme between the region and the government that supports economic growth throughout the county.