So, having discovered that I cannot escape the railway bug here on Orkney. What more can I do but give in?

What more is there to discover? …

Firstly, we had the day on Hoy today (2nd May 2019) as part of a guided tour of the island by ‘Island Tours’. [2] Three of us had the pleasure of visiting much of the island over a period of 6 hours with an expert local guide.

The evidence of wartime activity is nowhere more obvious on Hoy than in Lyness. Usually, we would have been able to visit the Scapa Flow Museum and Visitor Centre but sadly it is closed until 2020 so that it can benefit from a major injection of Lottery funding.

There is a temporary exhibition in the Hoy Hotel but time, on this visit, was not in our side. However, I did get a short time to wander around the site of the Museum and Visitor Centre … and came across a few gems!

In the last post I noted that there was a short length of standard gauge track close to the museum buildings. I was unaware, before this visit, that there were other railway related items on the site. Some pictures follow. A few of my own interspersed with those taken by others. Sadly, although I did see the steam crane, I did not get the chance to photograph it.

Standard gauge railway tracks at Lyness (above on 2nd May 2019). Apologies about the light.  

The adjacent photo shows a gathering of railway related items outside the Museum, © Peter Mattock. [3]

Another of these wagons at an earlier date on the section of track above, © Graham Adamson. [4]

Rail mounted steam crane, © Chris Allen, 2005. At this time the crane needed supporting on blocks but was otherwise in a relatively complete state. [5]

This later image shows the same crane without some of its superstructure and with its jib supported on an A-frame. Note the presence of rails in the concrete apron, © John Yellowlees. [1]

Two of the cranes which operated around Lyness Pier are pictured here during the war. Behind them are the large barrel-like floats of the boom defences stacked ready for use, © Imperial War Museum. [8]

Moving away from the museum a little, one of the old World War One piers is still standing with evidence that it was rail served.

The adjacent picture is mine, and although the image is not great, rails can be seen protruding form the still standing part of the pier, (2nd May 2019). A better picture is provided below.

A better view, © Damian Entwistle. Rails can just be seen protruding from the top timber decking above the steel girders. [6]

The construction of the World War 1 pier and wharf at Lyness. [8]

World War 2 operations at Lyness Pier. Note the steam railway cranes and stationary cranes along the pier length. In 1916, the Worden pier shown above (in the colour pictures) was constructed and land was requisitioned later that year to construct a concrete wharf. As early as 1939 a new wharf was requested at Lyness to meet the growing demands of the Navy. It wasn’t completed until 1944 and became known locally as ‘The Golden Wharf’ on account of the time and money spent on its construction. Part of the wharf now serves as Hoy’s Ro-Ro ferry service. [8] In the interim, three piers were built in Ore Bay in 1941 and 1942.

North pier (just visible at ‘5c’ on this map) was rail-served and was used for an inter-isle ferry service and landing of provisions. The remains of the WW1 pier are just visible to its left on the map. West pier was beyond the WW1 pier and is not visible here. It was also rail-served along its full length. The steel South pier was similar in design to the North Pier. It was on the far side of Ore Bay. It was used to transfer stores and particularly for the import of hydrogen for the barrage balloons. It cannot be seen on this map. Some of the rail routes which served HMS Pomona can be seen on this map.[8]

Appendix 1 is taken from the North link Ferries website. [7] It briefly tells the story of the construction of the barriers during and after the Second World War. These barriers formed a protective screen for Scapa Flow in the East durung the war. In the 21st century, they are a vital link between Mainland Orkney and the islands to the East of Scapa Flow.

The construction of the barriers was a mamouth undertaking.  The adjacent picture taken from appendix one illustrates at least three things – the use of railways in the construction, the value of the steam crane, and the scope of the precasting operation which was undertaken. [7]

There are two further images available that I am aware of which illustrate the value of railways in the construction of the barriers. Both are here courtesy of Damian Entwistle and were taken in the temporary exhibition at the Hoy Hotel.

The barriers under construction. Note the presence of rails which no doubt facilitated the use of the steam crane. [6]

This is a wonderful picture. Note: the dual gauge on the line in use by the steam crane; the blocks being cast in the yard and both the formers used for their construction and the A-frame overhead gantry to used to facilitate that work; and finally, to the left of the image, one of the steam locomotives in use during the construction work! [6]

An excellent example of the way in which the internet is changing the world in which we live, is the way in which small businesses set up in remote communities have been able to vastly extend their reach. One such business is Peedie Models. [9] ‘Peedie’ is an Orcadian word which means ‘little’. Paul Tyer who runs Peedie Models lives and work at his home on Orkney. His business is primarily internet-based and supplies resin-cast and 3D-printed models mainly for the N gauge railway modelling community. His own skills extend into meeting a number of modelling commissions in various scales and genres.

So, not only have we come to a place which had at least 24 different railways in use primarily during the War years, but we are also in a place where cottage industries can thrive and where one particular business supplies the modelling fraternity throughout the Uk and further afield. Paul’s current commission is to build a large model of HMS Royal Oak ready for some of the 100th anniversary commemorations associated with the first world war which take place in Orkney over the summer.

Paul was kind enough to invite us to look round his work studio on 3rd May 2019, and we bought a number of N gauge items from him. I also asked for permission to take some photographs of the studio. …

Paul owns 4 different 3D printers. This one prints in 100 micron layers and is the coarsest of his printers.

Paul at work on his computer. On this occasion he is printing a bill for the items we bought. Two more of his 3D printers are visible. These print at around 25 microns and models are of a much higher quality when then are procured on the machines. He also owns a 3D laser printer which is hidden behind the cardboard protection next to the other two 3D printers.

Some of Paul’s stock ready to sell.

Paul’s current major commissioned project is the building of a model of HMS Royal Oak.

The Churchill Barriers are a series of four causeways linking the Orkney Mainland to the islands of Lamb Holm, Glimps Holm, Burray and South Ronaldsay with a total length of 1.5 miles. They were built in 1940 as naval defences following the sinking of The Royal Oak, but now serve as road links, carrying the A961 road from Kirkwall to Burwick.

In 1914 the Royal Navy’s Grand Fleet moved to Scapa Flow as it was one of the largest sheltered harbours in the world and was ideally located to take on a German Fleet based in the Baltic. The narrow passages between the five islands on the eastern side of Scapa Flow were defended by sinking blockships. At the start of WWII further blockships were sunk and submarine nets were deployed, but proved inadequate. 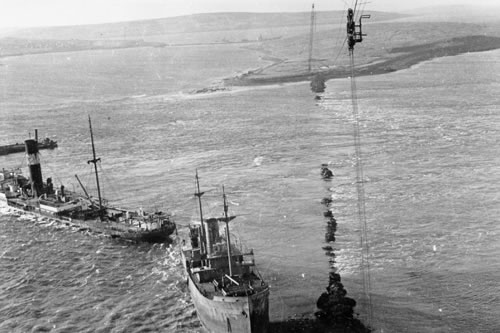 On 14 October 1939, the German U-Boat, U-47, made it’s way past the blockships at high tide and torpedoed HMS Royal Oak which was lying at anchor in Scapa Flow. 833 members of the Royal Oak’s crew were killed. Within a month, Winston Churchill visited Orkney and ordered that work begin on the construction of four permanent barriers.

To form the bases over 250,000 tons of broken rock were dropped from overhead cableways into waters up to 59 feet deep. The bases were then covered with 66,000 concrete blocks in five-tonne and ten-tonne sizes. The five-ton blocks were laid on the core, and the ten-tonne blocks were arranged on the sides in a random pattern to act as wave-breaks. 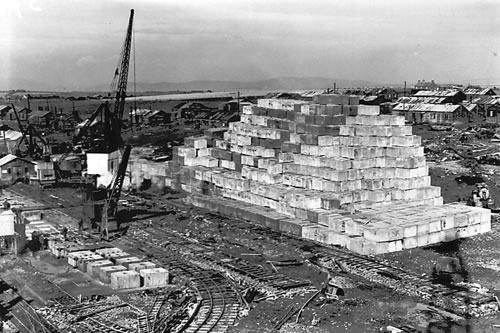 Material was quarried on Orkney, and concrete blocks were cast on an industrial scale on the islands before being brought to the cableways by a network of railways.

Much of the 2,000 strong labour force was provided by over 1300 Italian prisoners of war. The prisoners were divided between three camps, 700 in two camps on Burray and 600 at Camp 60 on Lamb Holm. These men also contructed The Italian Chapel. 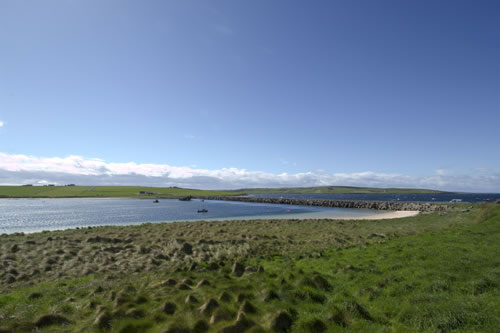 As the use of POW labour for War Effort works is prohibited under the Geneva Convention, the works were justified as ‘improvements to communications’ to the southern Orkney Islands.

The work began in May 1940 and was completed by September 1944. The Churchill Barriers were formally opened by the first Lord of the Admiralty on 12th May 1945, four days after the end of World War II in Europe. 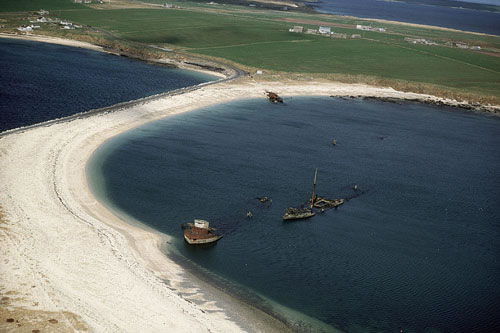 The lasting role of the Chruchill Barriers has not been as a defence for Scapa Flow, but as a series of causeways linking the five islands together. The roads crossing them have been improved over the years and Barrier No 4, no longer looks artificial. Over the years dunes have accumulated on the eastern side to form a lovely sandy beach and as a result Burray and South Ronaldsay are no longer really separate islands.

For most people a move to Orkney embarks them on a new adventure and this is certainly what happened when Paul Tyer bought a house here complete with a model railway in the loft.

Paul  now has a growing business ‘Peedie Models‘ out in Tankerness and the story of its development illustrates the potential for economic growth in Orkney for small enterprises.

John Stewart’s model railway running the length of the house loft reignited in Paul his passion and skill for model making. From making a few bits and selling them he now has a workshop equipped with the most up to date kit. Peedie Models can do 3D modelling, casting, laser cutting and custom designs. Future planning is for a workshop at Hatston and a ride on model railway out at his property in Tankerness.

You can view another aspect of Paul’s work if you visit the Stromness Museum where his model of HMS Hampshire is on display. Computer modelled from the original specifications it is a wonderful example of skilled craftsmanship coupled with today’s technology.

Paul was also involved recently in the Channel 4 Programme ‘The Biggest Little Railway in the World’.

“Dick Strawbridge and a team of model railway enthusiasts attempt to build the longest model railway in the world, 71 miles across Scotland, from Fort William to Inverness”

If you haven’t watched it I don’t want to give away any spoilers but I can tell you that Paul had a great time in 12 days of filming.

Peedie Models is a prime example of a small highly skilled business utilising today’s technology to successfully establish and grow in the islands.