How a long defunct, relatively small local railway company aimed high and ultimately was responsible for the poor financial state of the Great Central Railway!

I have been a bit of a NIMBY! All of my recent articles have looked far from home. I guess you could say it has been a case of, ‘Not In My Back Yard’.

I thought it best to put this right but I might have hoped for better things than this. …

I have been prompted to do so by reading a copy of BackTrack Magazine from May 1996 (Volume 10 No. 5) [2] which included an article about the Great Central which is now long-gone – sadly so, from an enthusiasts point of view. That article was itself a response to an earlier article in BackTrack Volume 9 No. 3 (March 1995) by Messrs. Emblin, Longbone and Jackson. [1]

It brought to mind the connections between Ashton-under-Lyne and the Manchester, Sheffield and Lincolnshire Railway (MS&L) evidenced by the name of its predecessor, the Sheffield, Aston-under-Lyne and Manchester Railway (SA&M). It also reminded me that early in my attempts to write interesting blogs I spent a little time on my present place of residence, Ashton-under-Lyne. I am wary of providing links to these posts, but they do pull together quite a bit of information about the early railway …… these are the links:

I am not sure, with the benefit of hindsight, that the second of the above posts was really necessary. An appendix to the third post would probably have covered the two links mentioned in the second post.

The article which grabbed my attention in the old BackTrack Magazine did so because it seems to root the significant problems of the Great Central Railway (GCR) in, what I could argue, is my local railway company’s own history. Hence the sub-title of this post!

The significant challenges faced by the SA&M Railway in being ahead of the game in providing rails across the northern backbone of the country led to a financial structure which seems to have dictated the future of its successors, the MS&L and, ultimately, the GCR. Heavily reliant, leveraged, on debentures and preferential stock is was difficult for the successive companies to attract ordinary investors.

The whole history of the GCR seems to have been dictated by the way in which the heavy capital expenditure necessary to cross the Pennines/Peaks was financed. 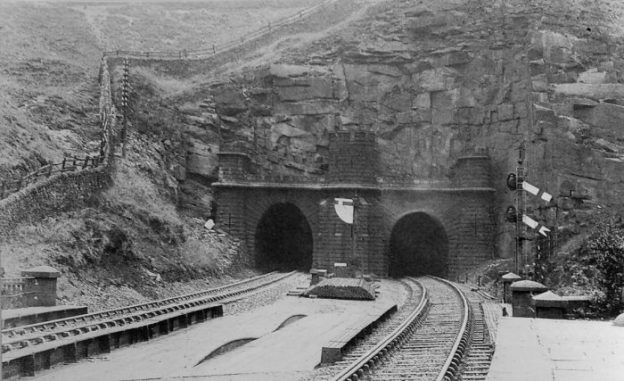 The SA&M Railway was one of the first railways to tackle truly formidable and desolate terrain. Nowhere was the challenge more evident than at the West end of the Woodhead tunnels, seen herevst the turn of the 20th century. The SA&M and its successors were encumbered with the twin problems of high construction costs and low receipts from intermediate stations over a long section of line. [2]

It should be noted that Emblin reserved a right of reply and that he chose to do so in a later edition of the BackTrack Magazine. [5]

His principal argument in that article appears to be that things were really not that bad and that the GCR managed its way out of trouble in a very effective fashion. I am not sure that this negates the reasoning of the articles referred to above, and I am sure that it does not address the particular point that the GCR faced ongoing financial problems which had their birth in the companies it succeeded.

Emblin argues strongly that Sir Alexander Henderson managed his way out of trouble by expansion. [5: p711] That seems to have been that practice of his predecessors as well. The result being that the company was highly leveraged and still not the best investment for ordinary shareholders.

It also does not alter my opinion that my local railway company had a great part to play in the issues which has to be managed by the GCR throughout its life.