In June 1945, shortly after the end of the War in Europe, “the allied military authorities returned the operating responsibility for the Trans-Iranian Railway to the Iranian Government. The line and its equipment were in a very run-down condition due to the hard usage received, and recovery took some years.” [1: p24]

The Cambridge History of Iran – Volume 1, which was published in 1968 says that after shortages disappeared a pattern became established, and by 1968, railways provided the basic freight-transport service from the Persian Gulf ports to Tehran and the eastern Caspian Sea region. The authors said, “Branch lines have been extended to Tabriz and Mashhad (Meshed), mitigating to a high degree the relative decline of these cities since 1925. A 120 mile westward extension of the railway line from Tabriz, now being built under the sponsorship of the Central Treaty Organization, will connect the Iranian and Turkish railways. (It was completed between Tehran and Tabriz by 1960.) An eastward extension from Qum, south of Tehran, is now complete as far as Yazd (but not by 1961 when Baker visited) and will ultimately connect with the Pakistan railway system in Baluchistan. During World War I a line of this system (then part of India) was extended as far as Zahidin in Iran, a short distance from the border. Service to Zahidin is provided by Pakistan National Railways, but there is no regular schedule.” [10: p559] The line when built was 5ft. 6in. gauge.

Because of shortages after the War, the parlous state of the network and the political/economic difficulties of the country arising out of the nationalisation of the Anglo Iranian Oil Company, “it was not until the mid-1950s that the railway system again began to grow significantly. After the completion of the Trans-Iranian Railway in 1938, Reza Shah launched the construction of lines from Teheran, 461 miles northwest to Tabriz, second city of Iran and capital of Azerbaijan province, and 575 miles to Meshed in the north-east, fourth city of the country in size and its most holy place of pilgrimage.” [1: p24]

It was planned to complete the Meshed line, which branches from the Trans-Iranian at Garmsar, 71 miles south-east of Tehran, in 1943, but the war brought construction to a halt in 1942. By this time the line was open to Shahrud, 267 miles from Tehran. Work on the Tabriz line, which was scheduled for completion in 1944, was likewise brought to a halt after it had reached Mianeh, 273 miles from the capital, and construction on both lines was not resumed for more than a decade. In April 1957, however, the line to Meshed was opened, followed a year later by that to Tabriz.

M.H. Baker says that rebuilding to “4 ft. 8½ in. gauge, of the line from Tabriz to Jolfa, and the branch to Sharif Khaneh, was also completed in 1958. These lines had been handed over to Iranian control by the Soviet Union shortly after Shah Reza’s coup d’etat” [1: p24] in the 1920s.

Baker was writing in the early 1960s. At that time he said that construction was “now under way of a line from Sharif Khaneh via Khoi and Qutur to Razi on the Turkish frontier where it is hoped to effect a junction with an extension of the Turkish railways. The connection with the railway system of Europe which this will create may prove of great economic benefit to Iran as it will be possible to carry exports and imports to and from Europe far more speedily than by the very circuitous sea route around the south of Arabia.” [1: p24]

He continued: “Likely to be of less importance, is a proposed link-up with the railway system of the Indian sub-continent. The immediate project is for a line from Qum on the Trans-Iranian Railway, 112 miles south of Teheran, through Kashan to Yazd with a branch to Isfahan. Work had already begun on the Qum-Yazd section (295 miles) in 1938 but was interrupted by the war. The earthworks were practically complete however, and it was possible to start laying track from Qum to Kashan in 1947, and this 61-mile stretch was opened in 1949. In 1959, construction onwards to Yazd was started. It is proposed ultimately to carry then line to Zahidan in the southeast,” [1:p24] where is would connect with the line from Quetta which we remarked on in the second article in this series. 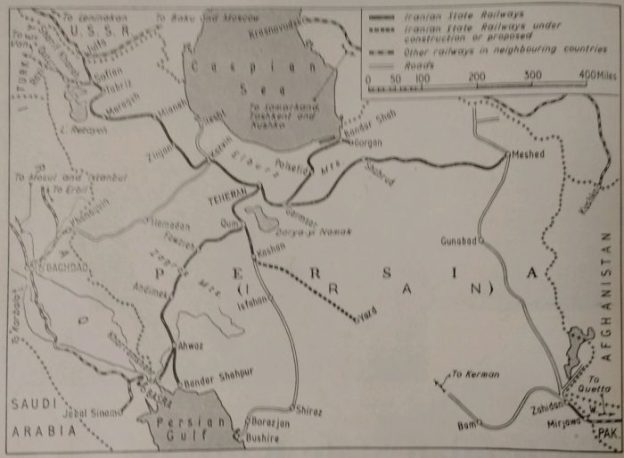 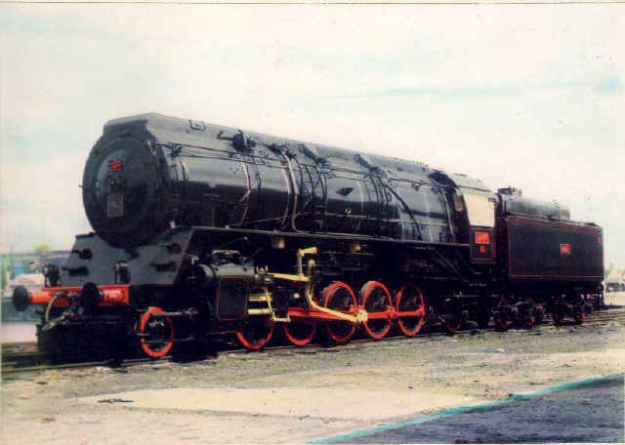 British-built Steam was a feature of this period in the history of the network in Iran and was dominant until the late 1950s. [19] There will be more about the motive power on the network in a future article. The two pictures above give an idea of the necessary power of the locomotives used on the steep grades of the Trans-Iranian Railway. Those grades were as steep as 1 in 35.

The Railway Gazette of February 1945 illustrates the gradient profile of the three lines referred to above. [18: p159]

Steam was not the only form of motive power. Diesel propulsion was introduced by the Americans during the Second World War and performed particularly well on the steep grades of the southern section of the Trans-Iranian Railway. However, the ALCO RCD-1 locomotives used during the war were all shipped back to the USA once the conflict was over. [14][15][16][17]

For a time, the network was again served by steam but as the 1950s progressed diesel power began to be sought out. [19] Wikipedia highlights the following units in use in the late 1950s all manufactured by Electro-Motive Diesel in the States. Full details are not provided and in its list of diesel power it makes no reference to the power units which were brought into Iran during the Second World War which it appears all were exported back to the USA. ….. [13]

I have only been able to find pictures of one of the Electroputere/Sluzer locomotives which ran in Iran and they are on Flickr. Two pictures show the loco. They can be found on the following links:

The Sulzer website has three pictures of a pair of this class of locomotives which were sent to Iran for trials. [23]

One of three views of a pair of 060 DA’s led by 0518 that were sent for testing in Iran. All three pictures can be seen on the Derby Sulzer Website All three views were taken at the town of Arak. (c)  F Burdubus. [23]

Electroputere S.A. was a company based in Craiova, Romania. Founded in 1949, it was one of the largest industrial companies in Romania. “Electroputere has produced more than 2,400 diesel locomotives, and 1,050 electric locomotives for the Romanian, Bulgarian, Chinese, and Polish railways” [21] and seems also to have produced a number of units for Iran. The company is still a significant economic presence in Romania. [22]

The country’s railway service was, at that time, supplemented by, and suffered severe competition from, road transport. There were “considerable restrictions on the types of cargoes lorries may carry on the routes running parallel with the railway. Railway freight traffic also suffered from the construction of petroleum-product pipelines from Khuzistan to Tehran and Mashhad, which eliminated its most important cargoes; and the completion of a refinery in Tehran in 1966 … removed most of the railway’s transport of fuel-oil.” [10: p560]

We will look at the 2ft. 6in. narrow-gauge railway system which supplied the Agha Jari oilfied from Bandar Shapur on another occasion.

Into the 1960s, the number of diesel locomotives remained relatively constant. Wikipedia lists only 2 No. new EMD  locomotives – EMD-G18W locomotives – which arrived in 1968. [13] The ‘W’ suffix relates to the fact that these locos were built for standard-gauge lines (a ‘U’ would designate narrow-gauge). [20]

As we noted above some railway construction continued in the 1960s – specifically the line from Qum to Yazd.

The next article in this series will look at the period from the 1970s onwards.