I am enjoying catching up on reading a number of books as part of being in lock-down. This book can now be bought relatively cheaply. I got my copy for less than the price of one of the railway magazines available in newsagents in the Spring of 2020.

When Michael Portillo’s railway television programmes based on Bradshaw’s Guide first appeared on the BBC I was delighted and avidly watched, perhaps, the first 10 series. As time has gone by, the format has gradually become less attractive. For me, this is because, the focus was never quite as dedicated to the railways as I had hoped and used the railways as a convenient way if linking a series of short video articles about life in general. 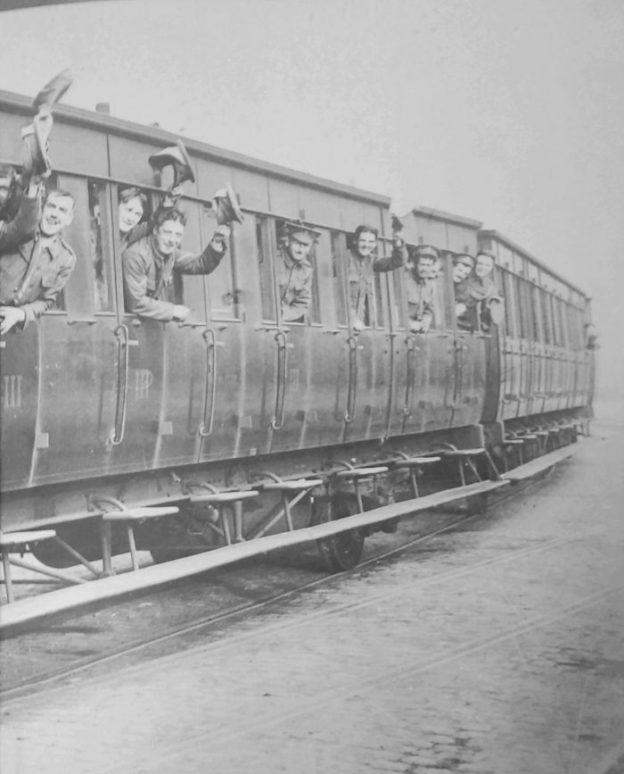 What has delighted me about Colette Hooper’s book is that it is unashamedly railway focussed. The dustjacket says: From the exploits of railwaymen at the Front to the secrets of railway spies who worked behind enemy lines; the manufacture of munitions in railway workshops to the role of railways in post-war remembrance – this book explores some of the remarkable stories of the railway war. Individually, each illuminates a different aspect of the conflict. Taken together, they provide us with a fresh perspective on the First World War as a whole.” [1]

Michael Portillo provides a forward to the book and appears occasionally in photographs throughout the text but otherwise his input into the book is minimal. The text appears to be Collette Hooper’s work. She is a television producer who specialises in social history and has been closely associated with BBC Two’s highly successful Great British and Great Continental Railway Journeys franchise since 2010. “She worked with the production team to develop ‘Railways of the Great War with Michael Portillo’, going on to edit much if the series. Colette studied History at Oxford University, with a focus on Early Modern Britain and Europe.” [1]

Collette Hooper has authored an excellent study on the role of railways in the First World War. “Railways helped to precipitate this mechanised conflict: they defined how it was fought and kept the home front moving; they conveyed millions to the trenches and evacuated the huge numbers of wounded. The railways sustained a terrible war of attrition and, ultimately, bore witness to its end.” [1]

Michael Portillo, writing in 2014 said: “A century on from the outbreak of the First World War, historians and the public are trying to understand it’s causes and it’s course better. I for one had never realised until now that it was a railway war. Grasping that helps us to appreciate how commanders planned offensives and defined objectives. The general who did not grasp logistics was headed for defeat. Britain was heading in that direction until it tackled the shell crisis of 1915 and the bottlenecks on the railways in France and Belgium the following year.” [2: p12]

A comprehensive bibliography and index support a better understanding of the subjects covered and help with navigation around the text. 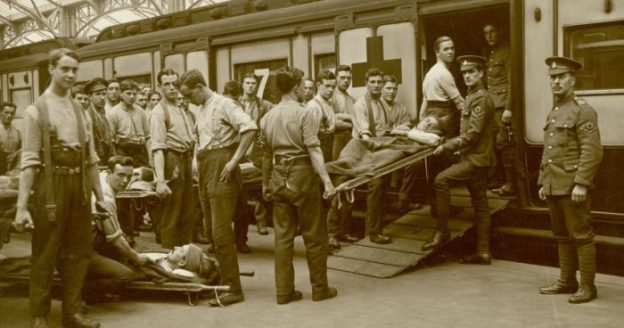 The National Railway Museum provides an excellent resource. This picture comes from their site. Ambulance trains were a very important contribution made by the railways to the war effort. Colette Hooper spends some pages in The Railways of the Great War describing this vital work. [2: p8, 79-84][3]

There are also a few delightful and/or important asides within the book. These include:

Perhaps one of the more significant short sections of the book is that devoted to the importance of the role of women in the conflict. [2: p150-158]

Overall, this book well worth the time it takes to read. It concludes with a couple of pages entitled: “Lessons of the Railway War.” [2:H p224-225] Hooper highlights how victory depended on logistics just as much as on military might. She asserts that “the dynamism injected by the railways gave rise to a paradox. The technology that facilitated the rapid projection of military might across vast distances in a matter of hours simultaneously served as the conflict’s ball and chain. The railways carried vast quantities of men and materiel to the front line with dazzling efficiency – but only as far as the railheads. For either side to advance, the attacking force … had to leave the tracks behind, cutting themselves off from their supply chain, while the defending side could use the rails to bring in reinforcements, strengthening their ability to repel the attack. By favouring the defensive, railway age technology perpetuated the stalemate. For both sides, the tracks became the trammels that imprisoned them in their dugouts, feeding a seemingly interminable war if attrition.” [2: p224]

Finally, she says, “The railways were the backdrop to the every day experience of war, and today perhaps they can serve to connect us to this chapter in our history. As we travel the same tracks and pass through the same stations … we can try to enter into the mindset of those who lived through the dark days of the First World War.” [2: p225]