Well, here’s a thing. …… “A holiday on Orkney sounds lovely but where is the railway interest,” I thought. ……..

We are holidaying on the Orkney Islands (April 2019), the scenery and beaches are wonderful. We were so sure that there would be little to interest me as far as railways are concerned. It seems as though we were wrong!

Sitting in our holiday cottage one morning, I decided to do a little internet research on Railways in the Orkneys, fully expecting to find little or nothing on a railway theme. I was wrong.

First I discovered the existence of an erstwhile private railway on Sanday – the Sanday Light Railway. This was a privately owned passenger carrying miniature railway situated in Braeswick, on the island of Sanday, Orkney, Scotland. 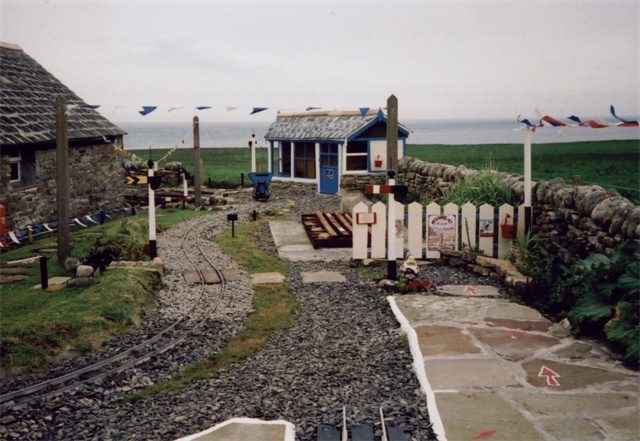 The railway was of 7 1⁄4 in (184 mm) gauge. Construction began in 2000 and the line closed at the end of 2006. It was the most northerly passenger carrying railway in the British Isles, and although it was primarily the owner’s hobby it did achieve the status of a tourist attraction and local curiosity. [1]

The railway sometimes ran one of its two steam locomotives, a 2-4-2 and a 2-4-0, but more often one of three petrol locomotives. The railway also owned a number of items of rolling stock, including a very rare Cromar White first-class carriage. [1]

Although trains had been operating occasionally in some form beforehand, [1] the railway was officially opened to the public in August 2006 by Sir Peter Maxwell Davies just a few months before its closure, which was variously attributed to the owner being unable to keep his promise to hold Sir Peter’s civil partnership ceremony there [1] or unreasonable demands placed upon the railway’s operators by local council officials.

In 2008 the owner was taking legal action against a number of organisations [1] overperceived discrimination and misconduct by those organisations, in relation to the railway, its associated tea-rooms and the abortive civil partnership ceremony.

I should have known that what was at one time a very significant military area would have had some railway provision. The range of gauges was significant. There were relics of standard gauge lines in the 1960s as well as at least two different narrow gauges and …. yes …. even a short monorail system.

A book was written in the mid-1990s by W. Simm entitled ‘Railways of Orkney’. I have just ordered a copy, second-hand. It may therefore be necessary to supplement this post once I have had chance to read that book. [4] a the adjacent image comes from the front cover of that book and shows Orkney’s first steam railway – a construction line on Hoy, operated by the contractors building the naval base on the island between 1914 and 1920. The loco is a small 0-4-0T German built engine and it is hauling a short spoil train. [4]

A Tunnel to Orkney?

Orkney lies less than 10 miles north of the Scottish mainland, a distance short enough to prompt many islanders to wonder if a bridge or tunnel could ever join the two.

In 2005, the islands’ local authority investigated whether a fixed link was possible. Research suggested a sub-sea tunnel between South Ronaldsay in Orkney and a point close to John o’ Groats would cost at least £150 million. Would it have been a railway tunnel?

Highland Councillor John Green said at the time: “When you consider that around £11 million a year in subsidy goes into the Pentland Firth ferry – it wouldn’t take long to recoup that by building a tunnel.”

There is a short thread on the National Preservation Forum, entitled ‘Orkney’ which considers the presence of railway item in museums on Orkney. [3]

I have found a few relevant photos while searching on thge internet. These are reproduced below:

This picture shows a short length of railway close to the Lyness Museum on Hoy, © Kirkwallian. [5]

Also taken at the Scala Flow Museum at Lyness. [7]

The gunpost at Scad Head required a cable-inclne railway as the road to the gun was too steep.© W. Watters. [5]

A remaining wagon frame and wheels from the Scad Head railway, © W. Waters. [5]

A Ruston and Hornsby locomotive at Lyness Museum on Hoy. [6]K

1 thought on “The Railways of Orkney”