Our journey recommences in Saint-Andre-les-Alpes. The feature image shows the village with the station in the foreground. The image immediately below gives a panoramic view of the village from the north, showing the first of the lakes in the Verdon valley behind the village, as well as the railway station in the bottom-right. [4] 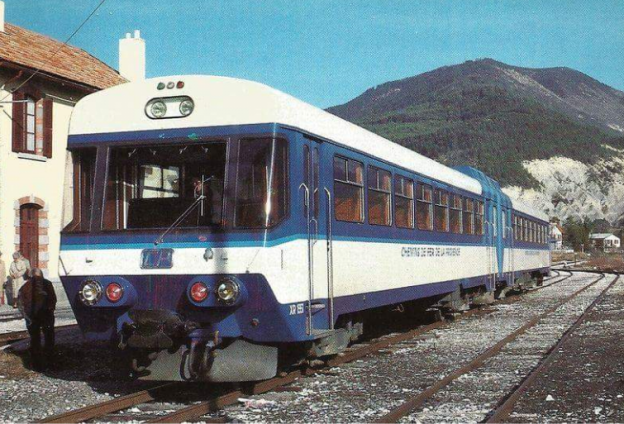 The advantage of travelling in a DMU or an Autorail is that views along the line ahead are possible. This DMU is preparing to leave Saint-Andre. [4]

Recently, the engine shed at Saint-Andre was fully refurbished by Chemins de Fer de Provence with fincance from the PACA region. The two images immediately below show this work underway. [5] 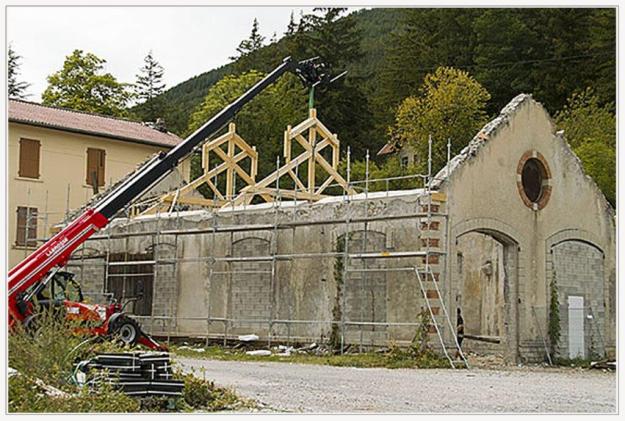 The shed was falling into disrepair. It dates from the opening of the line in 1911. Without prior warning, work started in 2014 on the restoration work. http://www.verdon-info.net reported on the work in September 2014. They established through talking to a railway employee, Stéphane, that: “This is a building for the office of the district chief between Thorame and Digne les Bains, the premises for the employees of the canton of Saint André les Alpes, and the storage of the Praisine and other maintenance machines. At the moment we are restoring the building and then will start the works of tracks to join the building.” [5] 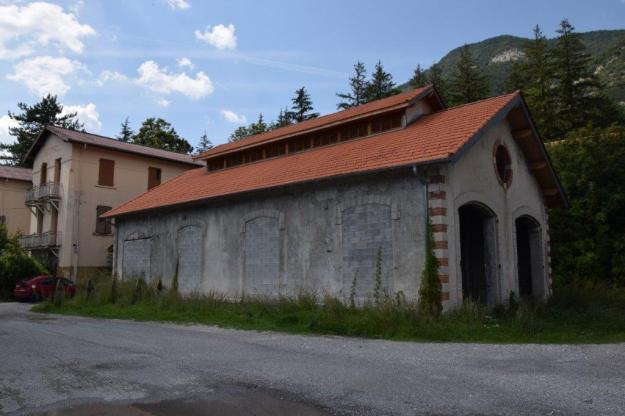 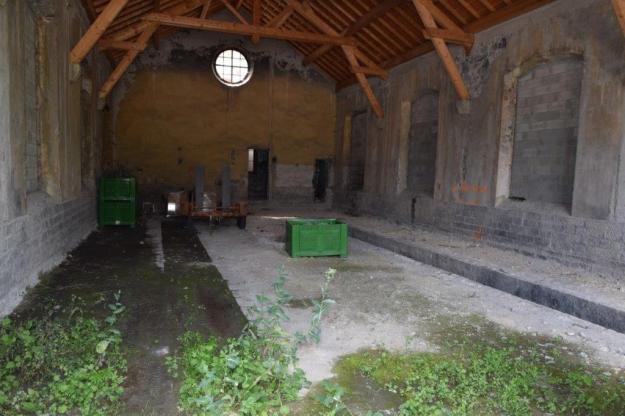 The four images immediately above show that the roof of the engine shed was fully restored to an as built condition, (c) Christopher James.[16] 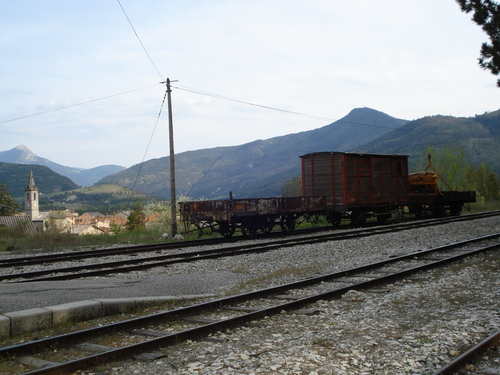 The driver’s view as the train sets off from Saint-Andre-les-Alpes. [1]

A rear view of an Autorail heading for Digne, or is it an Autorail travelling from Digne? Quite probably as the headlights are on! (c) © JMi 2. There is quite a bit of foreshortening in the image as the bridge on the station side of the Autorail is over a road.  [2]

Two views of the modern bridge just to the south of the station in Saint-Andre-les-Alpes.

Saint-Andre sits to the north of the stretch of the River Verdon which includes its famous Gorges. My wife and I spent a day in these Gorges in November 2017.

The railway turns away to the West following the N202 road, rather than following the River through the Gorges du Verdon. The OpenStreetMap below shows the station at Saint-Andre in the top right and, after the bridge over the N202, the next major structure on the route, the Tunnel de Moriez in the bottom left as a dotted line. 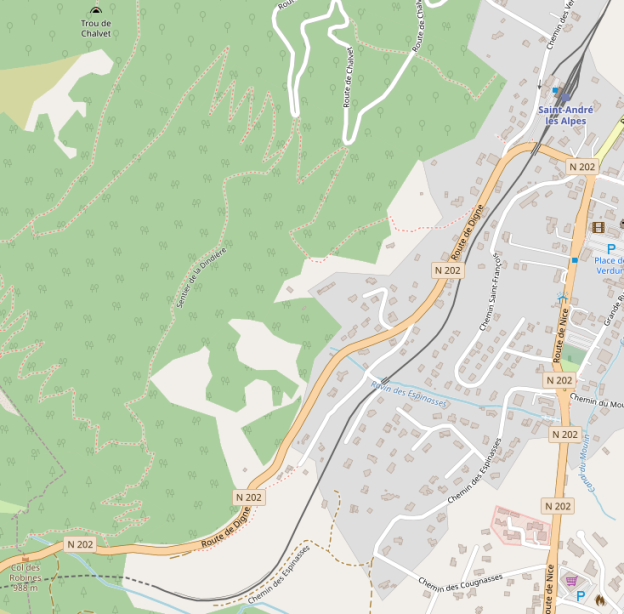 The Tunnel de Moriez passes under the Col des Robines. It is 1195 metres long and at an altitude of approximately 940 metres above sea-level. It is roughly on an east-west alignment, as shown below. It is marked by  red, blue and green dots. [7]

To the East, the railway lines swings sharply into the tunnel mouth. The line leaving the tunnel to the West passes through a deep cutting before meandering its way across a small accommodation bridge into Moriez. 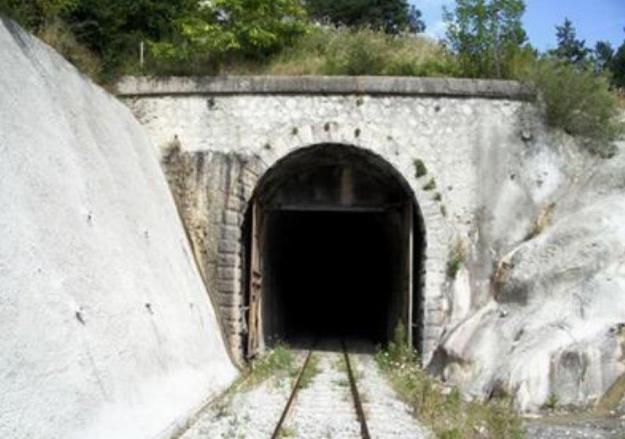 Two images of the West Portal. [7]

The railway is now in the Ravin de le Riou and follows the river into the village of Moriez. 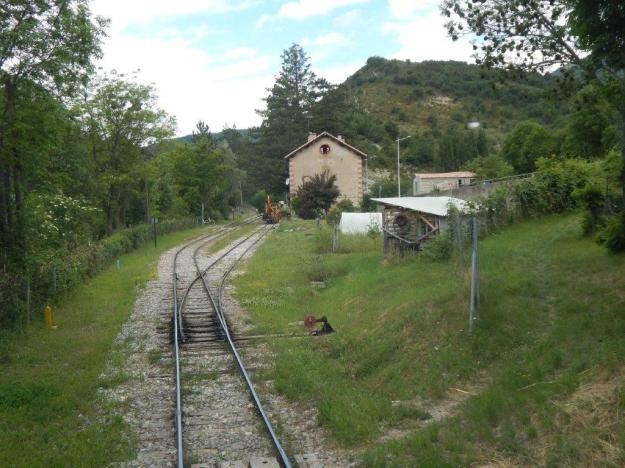 A driver’s eye view of our arrival at Moriez. [1]

Moriez Station taken from just to the East along the N202.

Moriez Station from along the N202 to the West.

After Moriez, the line follows Le Riou and then L’Asse de Moriez down its valley. It crosses Moriez Viaduct just to the west of the village and then runs parallel to both the road N202 and the river. 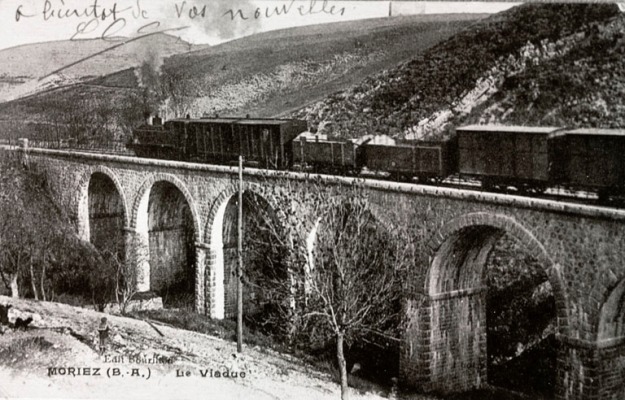 An early image of the viaduct, (c) Frédéric Pauvarel. [10] 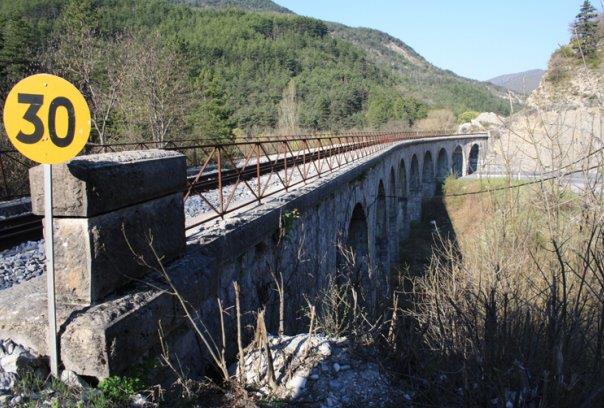 As the map above shows, road, rail and river run in parallel travelling west down the valley of Le Riou. The bridge at Hyeges spans a tributary of L’Asse de Moriez – the Torrent d’Hyeges. 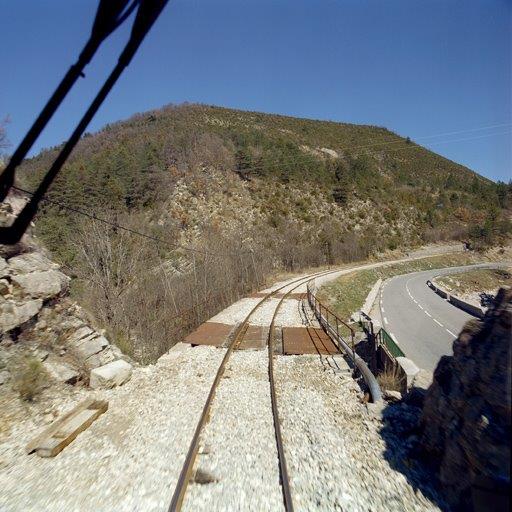 The Bridge at Hyeges from the South West, (c) Géraud Buffa. [14] 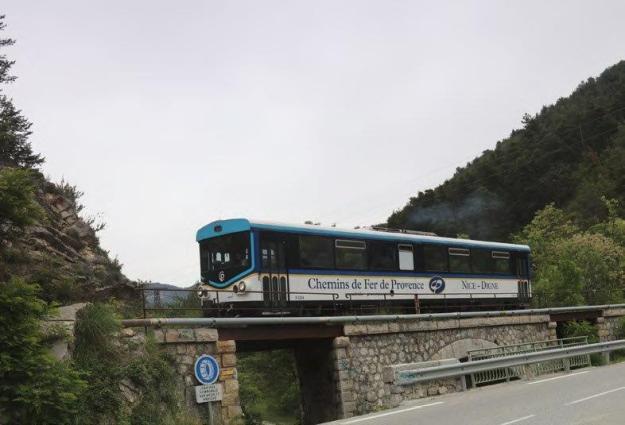 Immediately beyond the bridge the railway enters the Tunnel de Hyeges. This tunnel is only 72 metres in length. The red, blue and green dots fix its location on the adjacent map. [15] The bridge can also be picked out on the north side of the N202 just to the east of the tunnel. The portals of the tunnel are shown below. 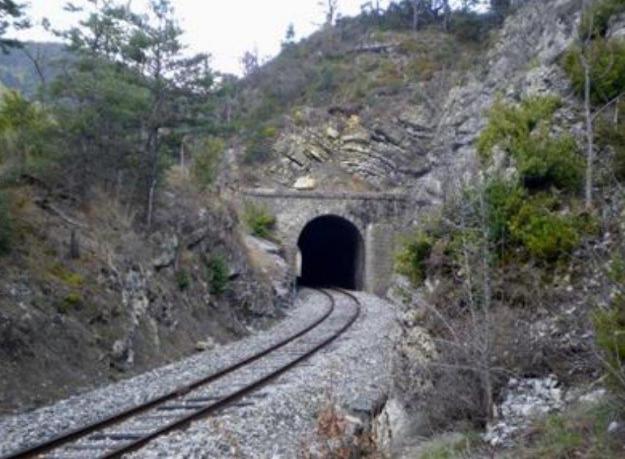 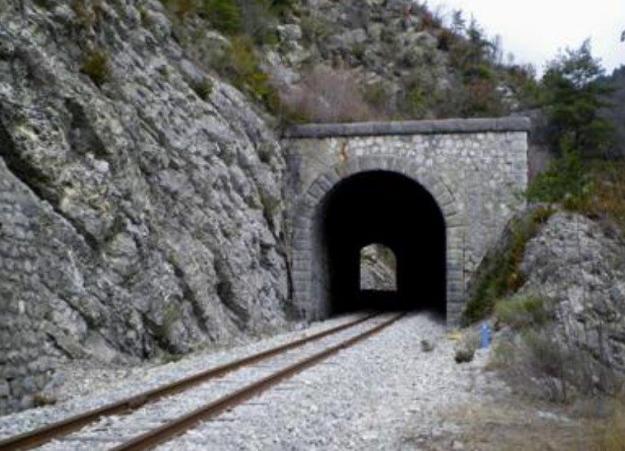 The road N202, L’Asse de Moriez and the railway continue to run in parallel.

A view looking East towards Moriez along the valley with L’Asse de Moriez below the road to the right.

Although the road and rail switch sides at a level crossing at Baumeniere. Some Google Streetview images of the crossing and crossing keeper’s house follow.

The railway now continues  between road and river, crossing a tributary of l’Asse de Moriez just down the valley from the level crossing – Ravin de Bouquet 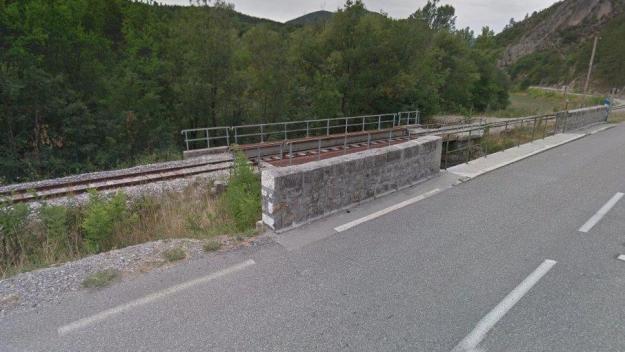 Road rail and river are still together at the next level-crossing, below, at Clôt de Moune.

We continue southwest down the valley of l’Asse de Moriez.

The bridge over the Ravin de la Gourre.

A series of other culverts and small bridges carry the line over a relatively broad flat area in the valley before the valley narrows once again. In the image below, taken from Google Streetview the river is below the railway to the left and the road has recently been widened requiring removal of part of the rock face on the right.

Old road, new road railway and river are all visible in the satellite image below. Just under 1 kilometre to the east of l’Arret de la Tuilière the railway crosses l’Asse de Moriez on a relatively small girder bridge.

Railcars Nos. X304 and X306 of the Chemin de Fer de Provence metre gauge Nice – Digne
line chug along between Moriez and Barreme with the 15:23 service from St. Andre les Alpes
to Digne les Bains on 8th June 2018. During the summer of 2018, this was the only northern section of the Nice – Digne metre gauge line in operation due to heavy engineering work taking place over several months between St Andre and Plan du Var, (c) Jeff Nicholls. [16]

The bridge on the image above appears to the right side of the map immediately above. Arrêt de la Tuilière is shown marked in red. Interestingly to the south of the station there is a small hamlet called ‘Repentance’.

A driver’s eye view of our arrival at Barrême. [1]

It is at Barrême that we take the next break in our journey towards Digne-les-Bains.