We will be resuming our journey from Thorame-Haute in just a few minutes, but as we wait for the train on to Digne, there are a few things to take in.

The first is the large chapel which has been built close to the station and which does not appear in the earliest postcard views of the station, nor in pictures which predate the railway’s arrival in Thorame-Haute. The site of the station was, and still is, the location of a special celebration in the Roman Catholic Church’s year in Provence. ….

The second, is the station itself.

Thorame-Haute hosts an annual celebration in Pentecost each year, and also seems to be popular for other celebrations during the year. The first two postcard images show a celebration in honour of Joan of Arc which took place in the open air on 26th September 1909.

Large crowds gathered on 26th September 1909 before the railway had been extended through the mountain to the valley of La Vaire. [1] 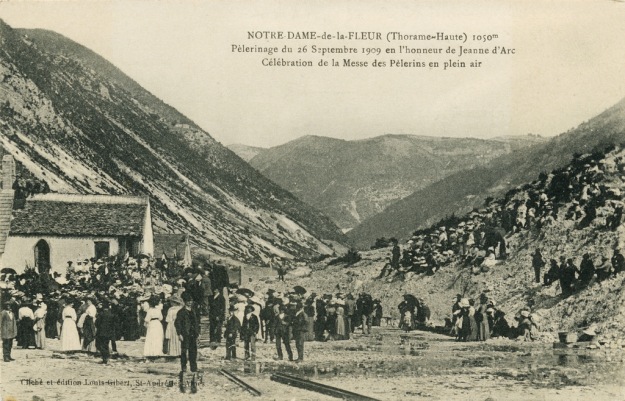 This second postcard view was taken on the same date and shows the small chapel which existed at Thorame-Haute at that time. The festival celebrations were taking place in the open air. [2]

But … these are not pictures of the major annual celebration. A little research into local customs provided more information on the Pentecost season celebration associated with Notre Dame de la Fleur. I also want to acknowledge Christopher James’s help it identifying the reason for the chapel at the location of the station.

In the fifteenth century, a peasant farmer lived in Thorame, possessor of a modest herd which he led himself to pasture. He was a Christian with patriarchal customs. One day, he appeared before the municipal magistrates claiming the appearance of angels who marked a location, eight kilometers from Thorame,  for the site of a chapel to be built in honour of the Virgin Mary. He had led his flock to the abandoned area and while he was praying, an angel appeared to him and as his vision ended he saw a single rose which came from the garden of heaven – a sign left for the shepherd to authenticate his vision, which earned the Virgin Mary the title of “Our Lady of the Flower. [3][10]

Fr. Juvenal Pélissier was born in Allos on 1st January 1879. In 1920, he was entrusted with the spiritual education of the parishioners of Méailles and Peiresc, in 1925 he moved to the parish of Thorame Haute.  For many years he made every effort to create a new chapel at the site of the vision and visitation. His parish newsletters continually and consistently focus on the  legend of Our Lady of the Flower. Eventually the foundations were started in 1936. [10] 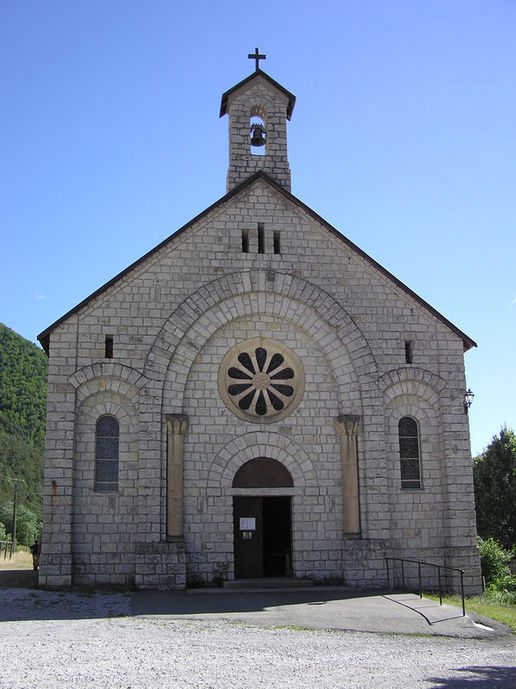 The present chapel building dates from the 1930s. It is the work of Abbot Juvenal Pélissier who worked alone for more than a decade to raise money for a new chapel. It stained-glass windows represent different species of flowers which grow in the valley of the Verdon. [3]

A postcard view of the interior of the chapel. [6] 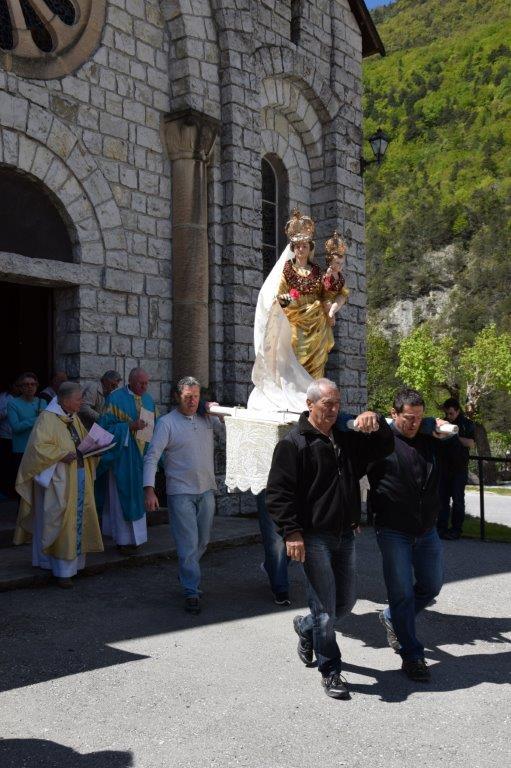 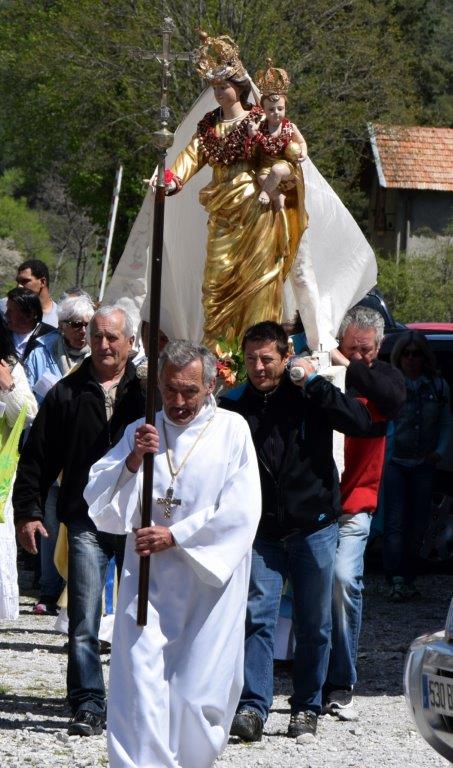 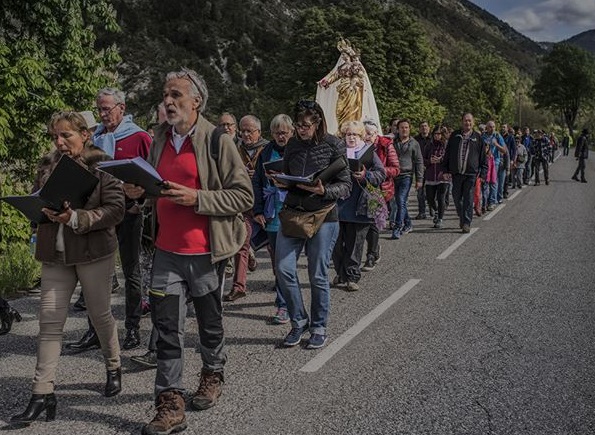 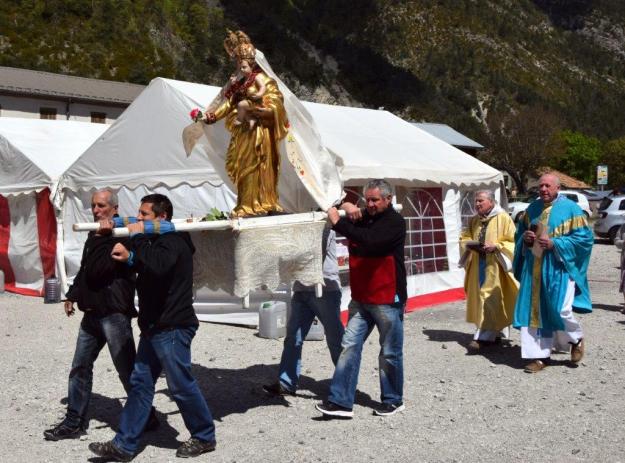 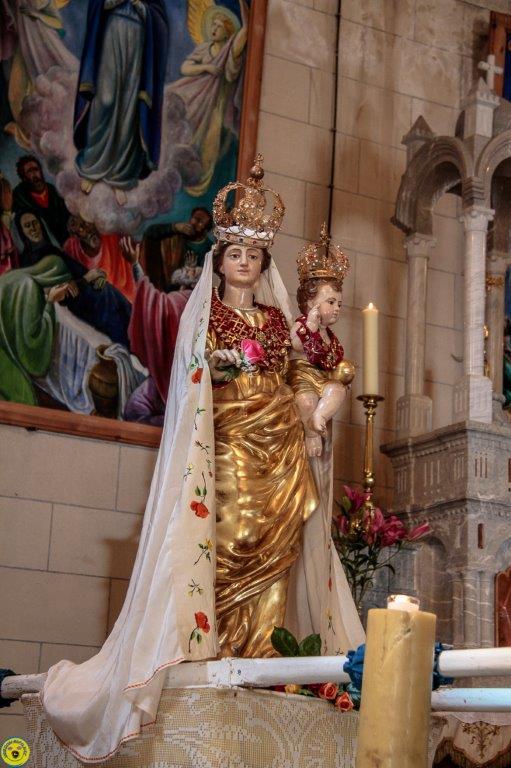 The tradition of the pilgrimage of Our Lady of the flower is still an integral part of the annual life of the inhabitants of Upper Verdon. The event is organised by volunteers. They prepare for the procession which starts in the main village of Thorame-Haute and ends at the railway station. In 2016, Marc LIboa and a team of volunteers provided a “reward meal” for all who participated in the procession.

The images immediately above show the participants in the festival eating in the shadow of the station close to the chapel. [5]

After this  the religious ceremony took place, “orchestrated by Father Benedict of Colmars the Alps, Father Jean Boudoux Canon of Barrême and Jean-Louis Colombano who assisted them. Pilgrims were numerous and everyone was able to leave with a bouquet of blessed flowers, beautiful flowers prepared … by volunteers.” [7] 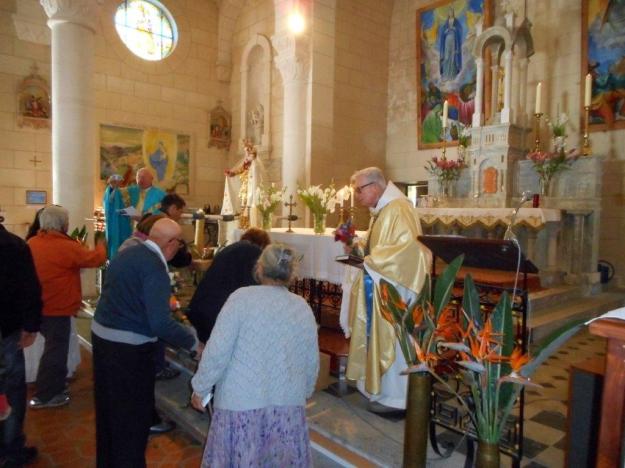 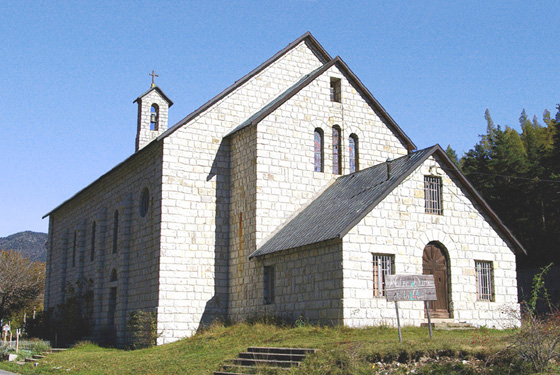 Another view of the Chapel. [8]

We noted towards the end of the last but one post that the site of the station at Thorame-Haute was inundated in the period immediately prior to it being due to be opened. A major rock fall delayed the opening of the line and required a significant retaining wall to be built in 1909 to 1911 to hold the land above the station.

The station site, the picture is taken from the D955 with the River Verdon  behind the photographer. The retaining wall referred to in the text can just be seen to the left of the goods shed.

The same retaining wall is visible behind the stored carriages above. The station can just be picked out to the left of the image. This picture is also taken from the D955. 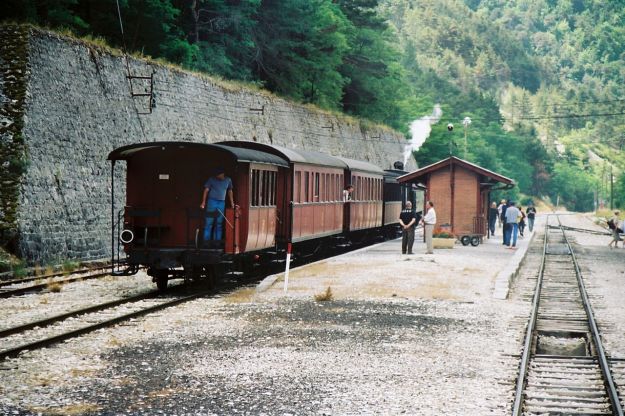 It can be seen more clearly in this picture. [13]

It is also evident on the right hand side of this postcard view.

A few photographs of the station show that a siding to the south of the station has been used for storage of redundant stock. It is clear that the metal surfaces of the carriages are ideal for graffiti paint! [9]

This panorama shot shows the three main parts of the station buildings, from left to right – the goods shed, the passenger facilities and the station buffet or restaurant. [4]

There is a rail simulator version of this line and I thought it might be of interest to see some stills from http://www.railsim-fr.com which show how this station has been treated. three pictures follow below. [14] 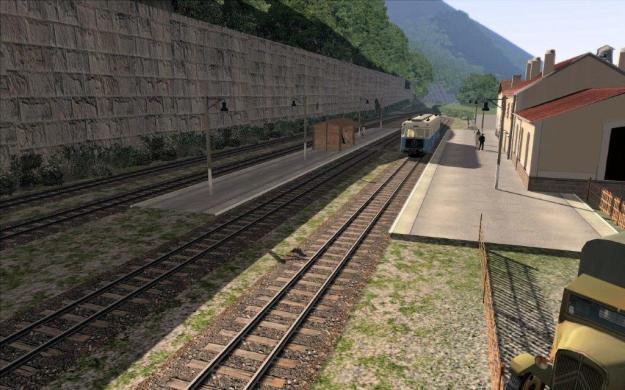 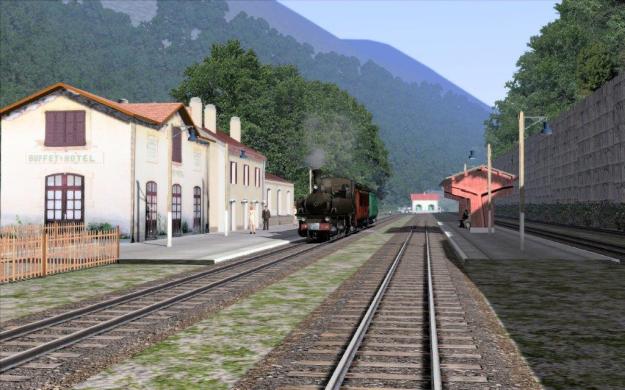 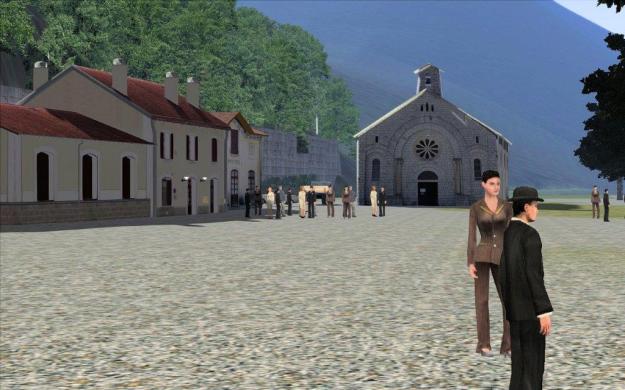 The overall impression is excellent, there are some detailed issues – such as the roof of the goods shed and the detail of the waiting shelter on the central platform in one of the images. Overall, these computer generated images give a good idea of the railway as it passes through the landscape. Tanguy has posted three images on the www.railsim-fr.com/forum for comparison … copies are provided below. [14]

This last image is taken from the top of the retaining wall referred to in the text. [14]

We climb about our train to head away south down the Verdon valley.The first two images below show a driver’s eye view as we leave the station. First we pass stored rolling stock and then head off down the single-track line. [15] 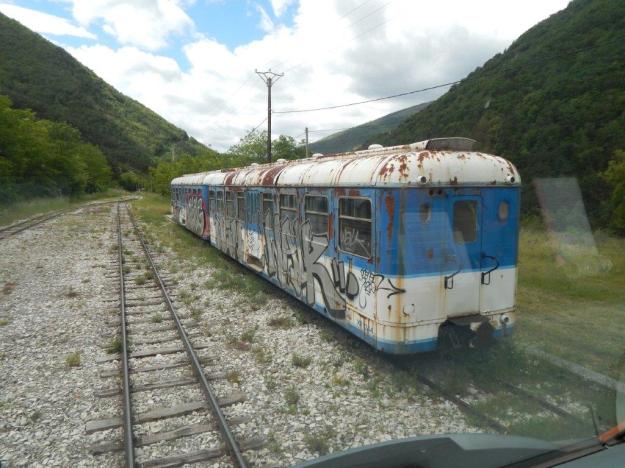 The D955 follows alongside the line at a lower level until it swings across the Verdon on the arch bridge above. A retaining wall is shown on the left of the picture which hods the railway above the road. The hillside above and below the line is very steep and retaining walls are needed along the length to secure the rock face above the railway formation.

The first image above is taken from the D955 on the west side of the valley of the Verdon. The second is taken from the driver’s cab in an Autorail on the line. [15] Both show the size of the retaining walls along this section of the line.

The next station is Allons-Argens. This next view is also taken from the cab of an Autorail, it shows the approach to the station. [15]

The station building from across the valley on the D955.

The D52 crosses the Verdon from the D955 and provides access to the station and on up the valley of L’Ivoire to Allons. 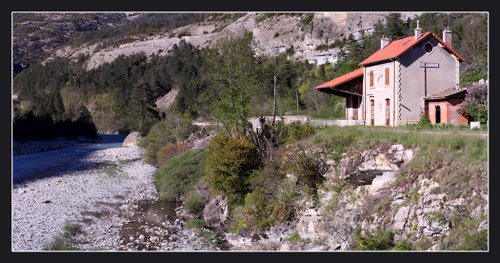 The old station buildings are fenced off. [19]

The station is a request stop and no facilities are provided for trains to pass. [19]

The line, which has been travelling in a generally southerly direction, curves first to the west and then to the south as it follows the east bank of the River Verdon. In about five kilometres, it crosses the river to the west bank and arrives at the village of La Mure-Argens.

Google Earth image of the bridge across the river. The view is taken looking North.

Driver’s view across the Bridge. [15]

Two images (above) of the rail bridge over the Verdon near La Mure Argens. [22]

A constriction plan for the same bridge, for a footway extension to the side of the bridge. [22]

A series of smaller photos, show aspects of the bridge and include two of the design drawings! [22] And then we move on the the village of La Mure Argens. 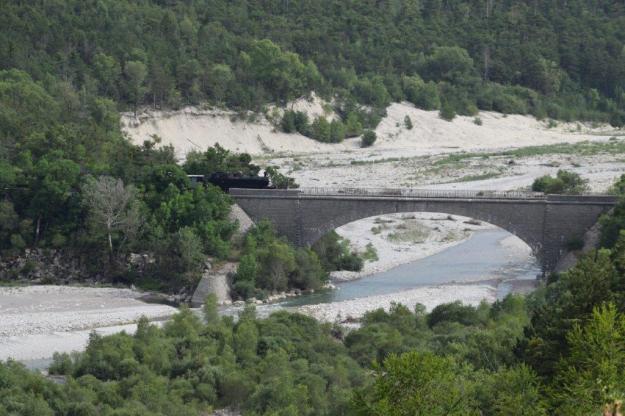 The station at La Mure Argens (above) as depicted on a rail simulator. [15]

The station was no more than a halt with no facility for trains to pass. The village was around 1 kilometre northwest of the station which was set in open fields. The first image looks southwest along the short platform. The second image shows the station building elevation and is taken from the fields opposite. Both are from the CCCP website. [20]

Two level crossings which retain their crossing keeper’s houses take the railway across roads to the south of the town. The first shows the cottage in a copse of trees next to the line. The second covers a more major road. 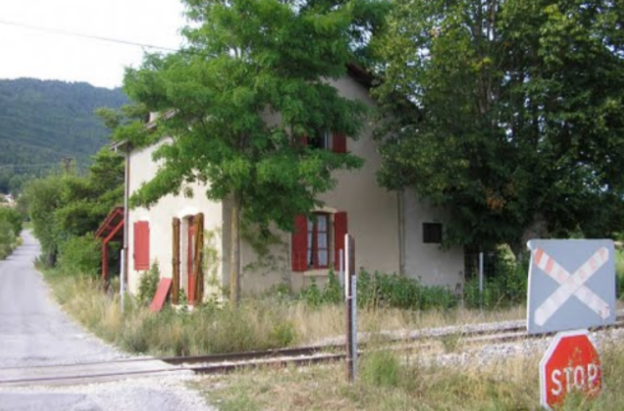 Leaving La Mure Argens the railway crossed the valley of the River Issole on another graceful single span arch bridge of the same design as that crossing the Verdon north of La Mure Argens. 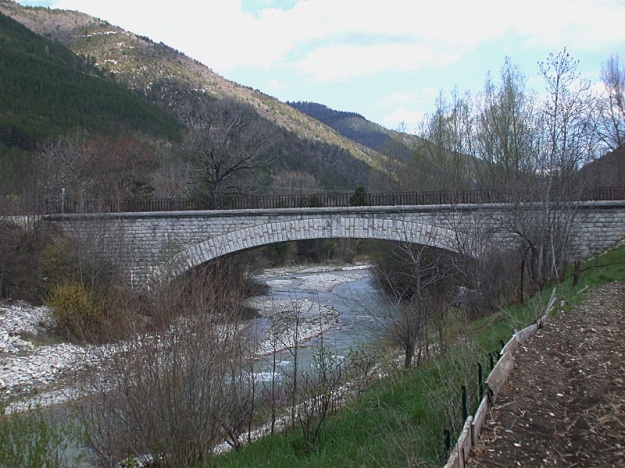 The Bridge over the River Issole. [23]

Driver’s view across the Bridge. [15]

Beyond the bridge over the River Issole (visible in the top right corner of the map above), the railway gradually drifts from a south-westerly course to a south-southwesterly course as it approaches Saint-Andre-les-Alpes railway station (in the bottom left above). there was a bridge over Route de Lambruisse (top right of the satellite image below) and the line then fed into the station. 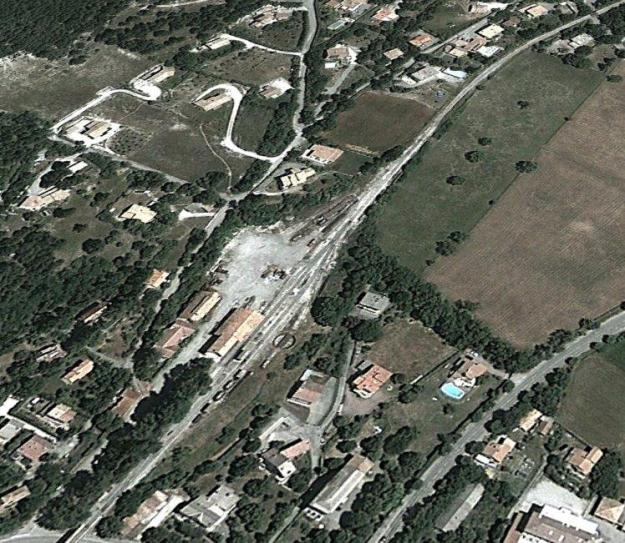 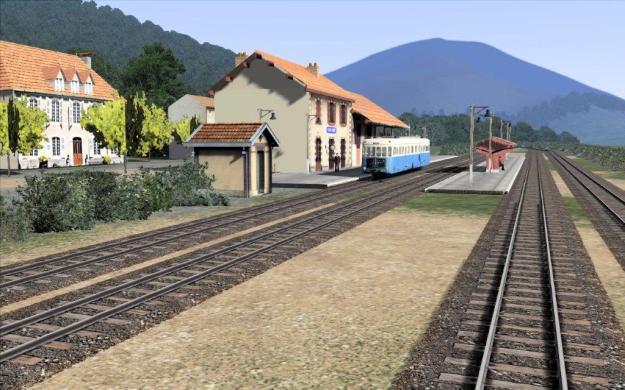 The three images above are all stills taken from a rail-sumulator. [14]

Looking South into the station site. [26] 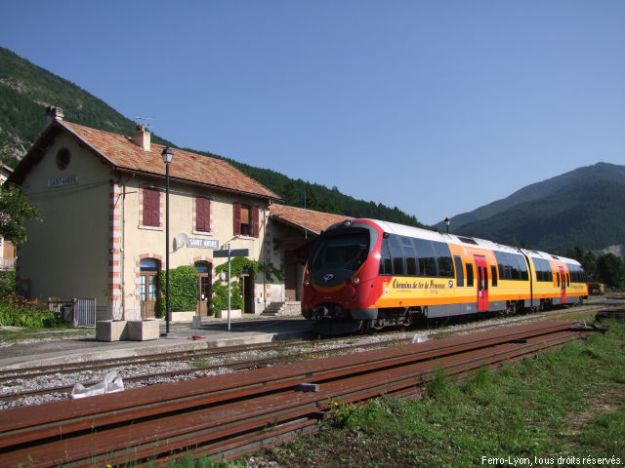 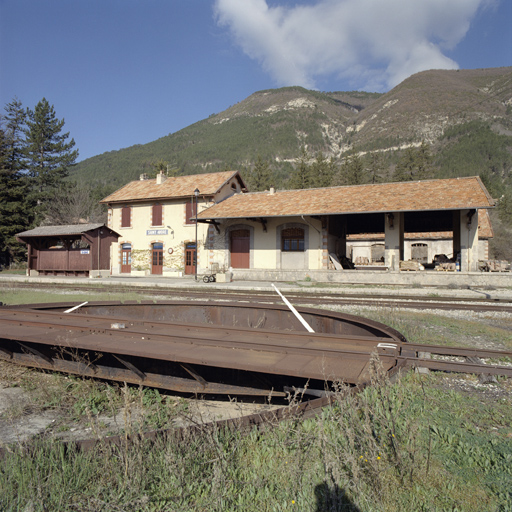 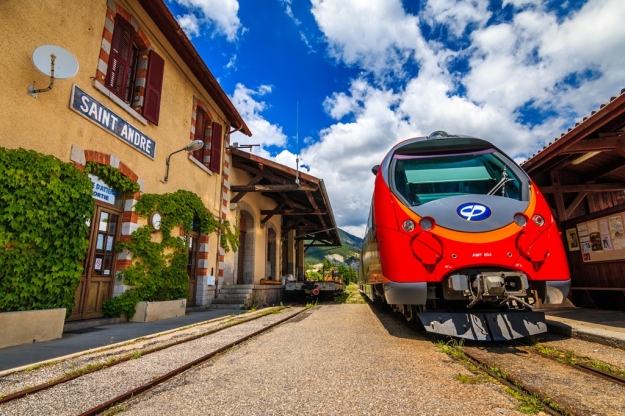 We take another break here at Saint-Andre-les-Alpes and continue the journey on another day.