I first looked at this tramway in 2013. It was only a short blog recognising the existence of the line to Roquesteron:

This map of the Esteron Valley tram route can be found on Marc Andre Dubout’s Website. [1]

Marc Andre Dubout comments: “The declaration of public utility dates from February 10, 1906 and the commissioning takes place seventeen years later, July 29, 1923. The commissioning of the line was delayed by landslides occurring on the line of Daluis which have monopolized the teams of roadmenders. … One month after the opening, an accident due to a braking problem interrupted the operation from November to December 15, 1924, barely a year after it was put into operation. The inauguration took place on July 24, 1924 in great pomp with MM. the prefect, mayors of the communes crossed, and of course banquet, Marseillaise, etc.”

The line departed from the Nice to Digne mainline at the station for the Charles Albert Bridge.

The Charles-Albert Bridge station at the time of the Estéron line. [1] 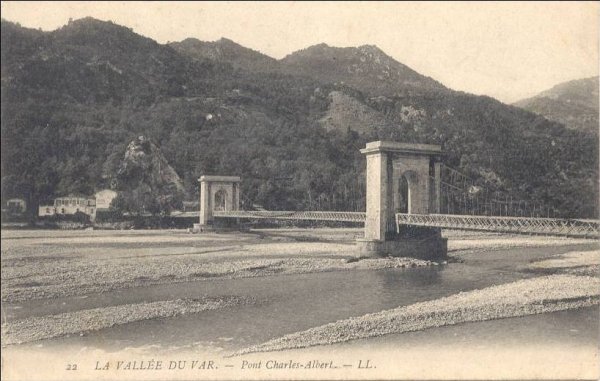 Before the tramway was constructed the Charles Albert Bridge was a suspension bridge (built by Marc Seguin in the mid-19th Century) [2] but this bridge was not designed to accommodate tramway loading. In 1913 it was rebuilt to accommodate the trams, just as was necessary with the Pont de la Mescla on the Tinée tramway. The replacement structure had six spans of over 30 metres in concrete built by the company Thorrand. In the foreground of the image immediately below, there is the Pont-Charles Albert stop and the lime kilns at La Lauziere overseen by the perched village of La Roquette sur Var, © Yann Duvivier. [6] This ‘new’ bridge was replaced in the mid-20th Century by the one which is in use today.

The bridge as it is in the early 21st Century is shown on the three images immediately above. [3][4]

The west end of the present bridgebridge (above), recovered from Google Streetview.

After about 2 kilometres a further hairpin bend led to the tramway and road returning to a southerly direction for over a kilometre. A branch-line struck off from this hairpin to provide a service to Bonson. A further bend led to the road and tramway travelling in a north-westerly direction. The excerpts from Google Maps illustrate the route. 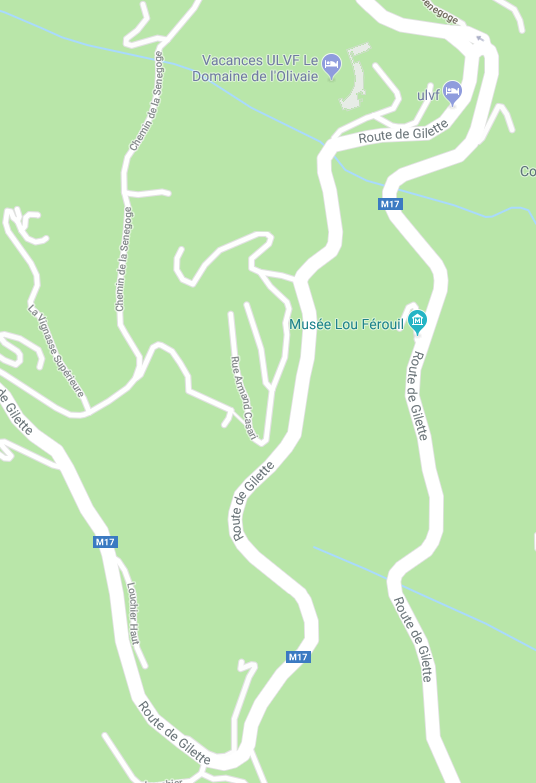 We can also follow the route of the tramway on Google Earth, as immediately below, and on the http://www.inventaires-ferroviaires.fr website [5] in the following image.

There is a discrepancy between the two lines (pink and red) shown above, at the eastern end. I can find no evidence to support the wide-sweeping approach by the tramway to the Charles Albert Bridge as suggested in the Google Earth image above. The tramway at other locations on the network could manage some very tight curves. There is evidence of this at Le Pont de la Mescla. The railway station in the photograph of the bridge which was built for the tramway in 1913, is close to the bridge. This mitigates against the tramway joining the main line further south after crossing the main line.

Carrying on with our journey, we have seen that the tramway gained height along with the M17 by running through a series of hairpin bends so as to keep the gradient reasonable. At ‘la Senegoge’ there was a junction. A branch-line went north to Bonson (blue arrows, below) and the mainline continued to Roquesteron (red arrows, below). [5]

Before continuing towards Roquesteron, we will check out the branch-line to Bonson. Sadly I have not yet been able to find any images along the route to Bonson which are contemporary to the tramway. We will have to be satisfied with images from Google street view in 2017 which show a wide metalled road in place of what would have been a narrow un-metalled carriageway not much wider than the loading-gauge of the trams. The tram loading gauge was 1.9 metres and the road width would have been no more than 3.3 metres if not less. 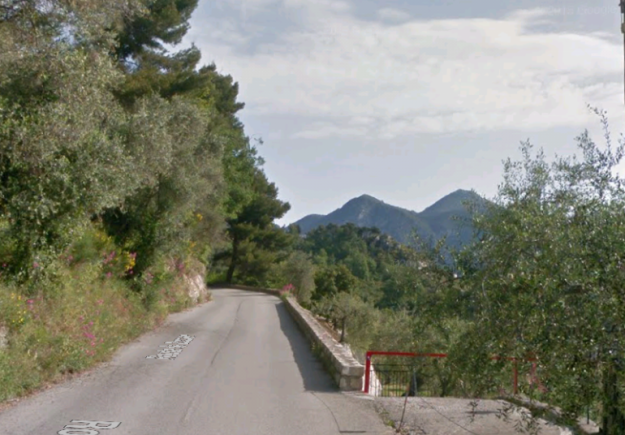 Initially the road/tramway travelled northwest from La Senegoge approximately following the contours of the hillside, before turning tightly to the east in the Vallons du Baus de Lunel. The road/tramway climbed through La Salles and turned north. The approximate line of the route is marked in pink on the satellite image below.

North of La Salles the road/tramway continued following the contours through olive groves towards Bonson. 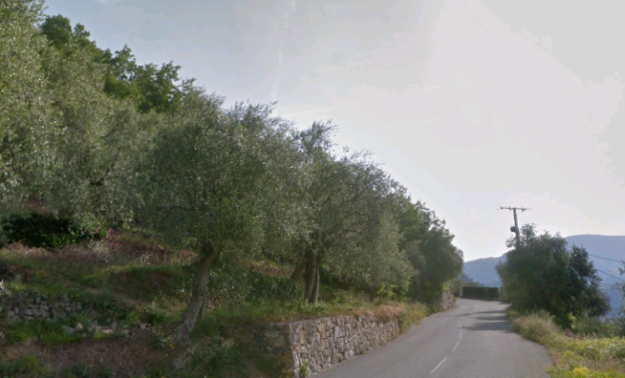 The route enters the satellite image above at the third point on the left side at the bottom, and travels through this olive groves to Bonson, the village in the top flight of the photograph and the terminus of the tramway branch-line. [6][7][8]

We now return to ‘la Senegoge’ and resume our journey up the valley of the Esteron River. As we have already seen the road/tramway travelled south from ‘la Senegoge’ before turning sharply to the northwest and heading for the village of Gilette high on the slopes above l’Esteron and visible on the left side of the picture immediately below. [9] 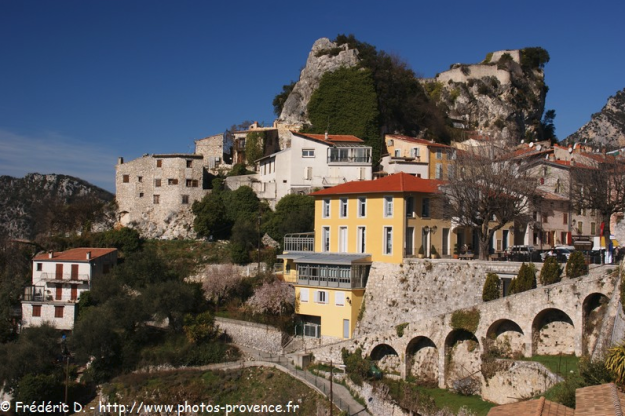 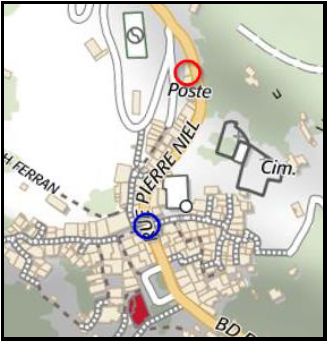 The village of Gillette sits in a craggy location above the River Esteron. Two features are highlighted here. The blue circle marks the location of a bridge over the road/tramway in the pictures immediately below. The red circle is the location of the tramway station. [5] 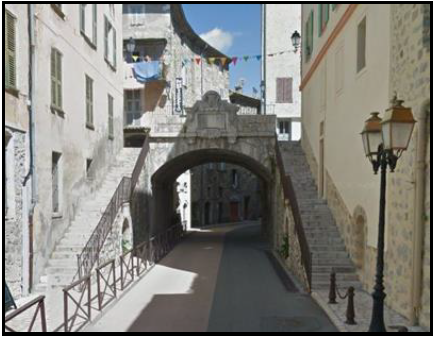 The bridge from the North, Google Street view.

Heading on from Gillette, the road/tramway followed the contours above l’Esteron, through the forested slopes on the north side of the valley.

The route circumnavigated the side valley of Le Latti. The route is shown in blue above entering the satellite image from Gilette on the right.

The route continues to follow the contours through the forests on the north side of l’Esteron. There is a very short tunnel on the route close to the top right of the above image, its location is shown below. [5], and in images immediately below the map, first from the East and then from the West.

It is very likely that the tramway followed the track on the outside of the bluff.

The next point of interest on the rout is the halt at Colle Belle which is identified on the map below by a red circle. 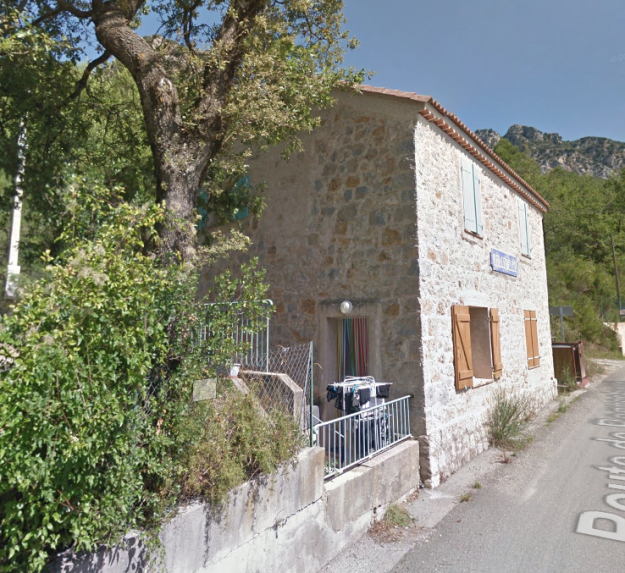 The small station building of Colle Belle, the name-plate is still visible on the face of the building. [5]

Before leaving Colle Belle, it is worth noting a significant accident which occured here in November 1924, soon after the line was finally opened. The headline is shown below and a translation of the article is provided in the references below, courtesy of Marc Andrea Dubout. [12]

At Ciavarlina, the tramway passed through a steeply side cutting which inevitably has been widened to accommodate the modern road.

It then passed under the D117 at Vescous in another short tunnel, marked with a black circle on the adjacent plan, [5] before winding its way into what was the station. The old station building is circled in red on the adjacent plan. It is now a restaurant.

The tunnel portals are shown in the next couple of pictures which are followed by a picture of the old station building. 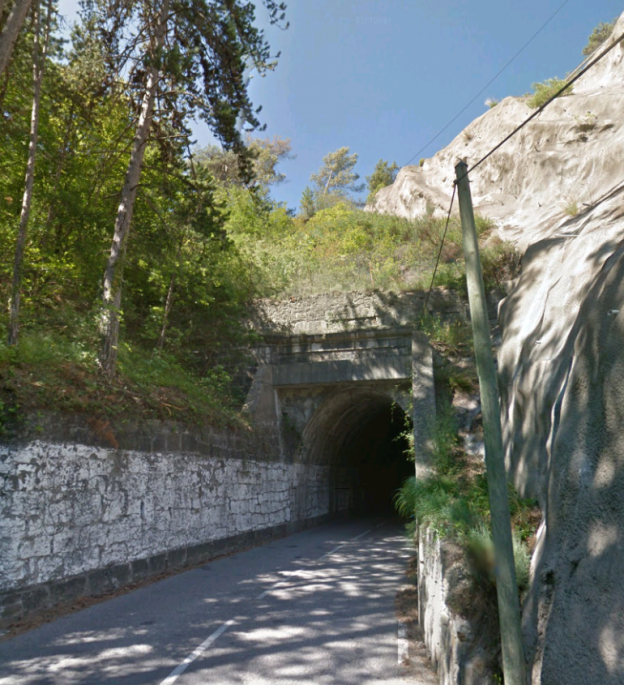 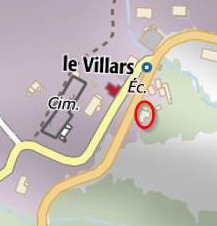 The old station building at Vescous (above) still bears the station name-board but it is now a restaurant. [11]

The next stop on the line was le Villars (sometimes spoken of as the halt serving Pierrefeu). The station building is circled in red on the adjacent map. It was much smaller than the station building at Vescous which probably suggests the the stop was of lesser importance at the time the tramway was built.

After le Villars, the line continued to share its formation with the road. The route is shown on the satellite image below.  It is the lowest blue line in the photograph, running southwest from le Villars before turning east and the following the contours around the valley of Le Riou.

The present bridge over Le Riou, the image is taken from Google Streetview.

The valley is heavily forested at this point and the image above is typical of the next few kilometres of the route. The road/tramway follows the contours on the north side of  l’Esteron Valley, crossing a series of different culverted run-off water courses from the hills above. The images below show the locations of the culverts provided for the Ravin de Vuefort and Ravin de Caine which are typical of a number along the route.

The next station on the tramway was at Le Ranc. The location of the station building is circled in red on the adjacent map.

The building design closely mirrors that at Le Villars. The location od the station name-board can be picked out on the elevation of the building which once faced the tramway.

We are closing in on the end of the line – just a few more kilometres to go. The map below shows the remaining 3 to 4 kilometres of the line. Le Ranc appears in the bottom right and Roquesteron in the top left. 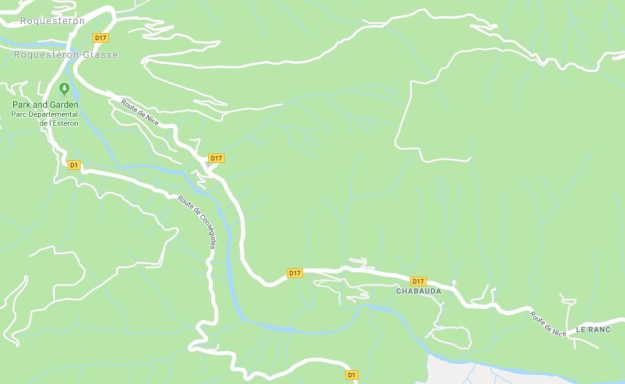 A little before Roquesteron the tramway crossed a more substantial viaduct over La Villette. Now-a-days the road divides as the viaduct was only constructed for the width of a single vehicle. The adjacent pictures show the viaduct. [5]

Another couple of kilometres and the tramway reached Roquesteron, both road/tramway and river turned north into the village.

Before entering the village proper, the tramway/road crossed Le Riou a tributary  of l’Esteron. A popular local name for a watercourse! Teh bridge can be seen above and on the right of the map below.

The tramway entered the village on what is now called Boulevard George Salvago. The terminus was adjacent to the Post Office and the depot was almost nextdoor. The image below shows the arrival of the first tram in Roquesteron when the line was first opened.