This post provides a short survey of carriages, goods wagons and brake vans/cabooses on the network in Kenya and Uganda from the inception of the Uganda Railway in the 19th Century to through the demise of the East African Railways Corporation in 1977 on to 2018 when this post is being written. The approach is eclectic rather than structured and the post includes some interesting vehicles.

A. The Early Years

Nairobi Railway Museum houses a couple of examples of passenger stock from the very early years of the line. During the construction phase of what was the original main line from Mombasa to Kisumu it was not possible to provide air conditioning in carriages! Carriages had to be design in order to limit temperature experienced by passengers.

It was from this coach that superintendent Charles Henry Ryall was dragged and killed by a man eating lion on 6th june 1900 at Kima station. [1]

Interior of a 1st Class Carriage at Nairobi Railway Museum. [35]

The coach in the first image above can be seen poking its nose into this image of another Uganda Railway 1st Class carriage. The photo was taken, by me, in 1994.

British and SA troops in WW1 decorate a Uganda Railway train at Voi with merchandise confiscated from felled or runaway German troops. [9]

Lion leaning on the back of carriage with box van behind, dated around 1961. The image shows a lion stepping up on to the back of the railway carriage and trying to find a way in. The photo is linked to the East African Railways & Harbours/Caltex historical film ‘The Permanent Way”, which included the building of the original ‘Uganda Railway’ from Mombasa to Kisumu (now in Kenya) from 1895 to 1903. [36]

An example of one of the above coaches at the rear of a train on the first (timber) bridge between Mombasa Island and the mainland. [2]

Similar carriages illustrated again at At Mombasa Railway Station around the turn of the 20th century. [3]

Another images of the early carriages, this time at Changamwe Railway Station a few kilometres from Mombasa. [4] This picture also provides a glimpse of a typical covered goods wagon in use on the line in the early 20th Century.

A short train of open wagons close to Mombasa in the construction phase of the line. [3]

The two images immediately above are evidence of a rather chaotic attitude to the transport of railway workers in the years of the construction of the line! [6]

A Uganda Railway wagon stands alongside Indian labourers as they repair the railway near Taveta during WW1. It had been bombed by the Germans. [9]

An interesting example of early holiday travel. A short journey down the line to shoot game! [7]

A further example of provision made for shooting parties: the High Commissioner to had the railway extended to his estate. It was used by the Governor Frederick John Jackson who owned a 1910 BSA Railcar, which was used for hunting parties. When the American President Theodore Roosevelt visited Uganda he borrowed the railcar. The BSA Railcar above was restored by the Sandstone Heritage Trust in South Africa. [7]

The railcar was made for the High Commissioner by the Drewry Car Co, using a BSA engine. Drewry & Sons had previously been cycle builders, run by Charles Drewry and his two sons, and located at the Herne Hill Cycle Works, 286-290 Milkwood Road. James Drewry delivered a motorised railway inspection trolley to Africa (below). Subsequently the company started building the BSA-engined Railcars. BSA took over production themselves in 1908. [7]

An early goods train on the line, crossing a steel viaduct. The train is a combination of open wagons and a cattle wagon. [10]

An open wagon supplied to the Uganda Railway in 1902 by the Metropolitan Railway Carriage and Wagon Company Ltd of Birmingham, UK. [16]

Another early wagon on display at Nairobi Railway Museum. [24]

I have recently discovered some photographs of a model railway based on this line in the early years of the 20th Century. My interest in model railways means that I find these images exciting.

I have still to find out more about this model. The rolling stock and locomotives seem to be very faithful to the original. [12]

B. The Developing and Growing Network

Early coaching stock began to give way to slightly better travelling conditions and carriage sizes began to develop to provide the travelling public with a better standard of service.

The three pictures immediately above were taken by me in 1994 at Mombasa Railway Station. They provide a glimpse of passenger coaches stored in the sidings at the station and it is my hope that this blog post will place them into context in the history of the railway.

The interior of a restaurant car. [23]

A Class 11 locomotive during WW1 travels with an open wagon ahead of it to allow for the possibility of German mines.

Passenger livery for an inspector’s caboose complete with rear window which was not fitted on a goods caboose. Goods cabooses were finished in all over maroon, as shown in the smaller image below, (c) Peter Ritchie. [11]

The larger monochrome image below shows a passenger train caboose in use by the sikh drivers of the train as their rest-coach between stints at the controls of the train, (c) Anthony Potterton. [6]

The image immediately above shows a large caboose (No. 962) in all-over maroon, pictured in the Mombasa Railway Station sidings in 1994. The picture is one of my own.

The photograph above shows a similar caboose (No. 6067). The notices on the doors indicate that the left-hand door is for the Mechanical Department Staff and the right-hand one for Mechanical Department Drivers. The caboose is stabled at Voi. [13] A similar vehicle is shown in this picture (adjacent) taken by George Gilliland. [11]

Freight/Goods wagons increased in size from those used in early years. The picture below shows an early flat bed wagon being loaded with a more modern car. [6] Should we call it a car transporter?

The sidings at the main stations on the line provide ample evidence of the amount of freight which used to be carried on the line. Much of the rolling stock (both for freight and passengers) seems to be stabled and unused in many of these images below. These images have been trawled from a series of different websites.

More pictures taken from Nairobi Railway Museum (above and adjacent). [15]

A typical mixed train consist is shown below – coaches, box wagons and tarpaulin covered open wagons being typical. There would also have been a caboose to allow drivers rest-time.

More images of rolling stock follow. As the 20th Century gradually came to an end traditional wagons were replaced by flatbed container wagons. Rail transport also began to specialize as road transport carried the more regular loads.Typical goods traffic from the 1960s was covered wagons which required loading before incorporating into goods trains, as immediately below. [17]

Bulk loads of oil or specialist loads of wire which travelled from point of origin to point of destination on the railways, and did not need transshipment, became the main freight carried on the line. A typical oil train is shown above. [19] And a specialist load is shown below. [20]

New coaches for Kenya produce by BREL in Derby UK. [33]

A series of railway maintenance cranes were kept at a variety of stations along the route of the metre-gauge line. Some of these are now kept at Nairobi Railway Museum.

In the latter years of the East African Railway Corporation purchases of light weight carriages were made and many of these were used as 1st Class carriages.

A number were used as coaches to be dropped off from the main services to allow first class access to branch-lines. This practice is covered in an early post in this series. [30] A couple of photographs follow. ….

East African Railways Railcar No. 3 was a Wickham Railcar, it was built in 1947. One of its sisters is shown below. [26] 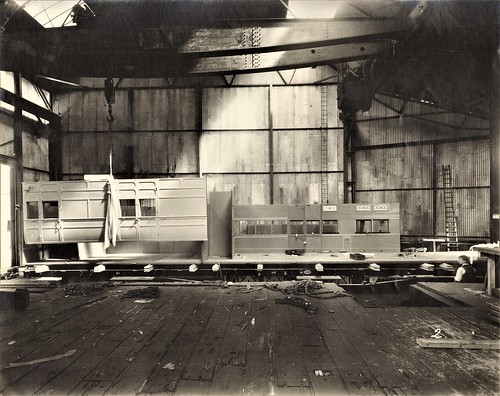 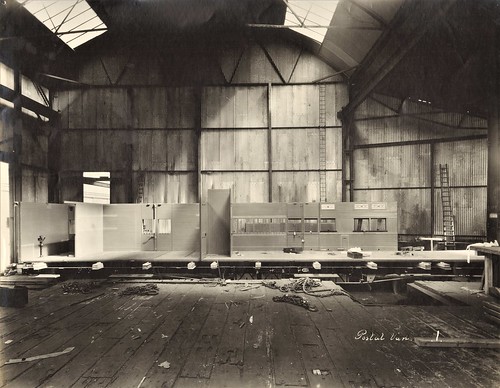 The two images immediately above show a Uganda Railways Postal Wagon under construction at the Gloucester Railway Carriage and Wagon Company Works in the UK. [29]

After 1977, the rolling stock (and locomotives) on the network were distributed between the three main constituent parts in Kenya, Uganda and Tanzania. Very little new stock was purchased once the East African Railways Corporation had been split up. However, in 2015, the Uganda Observer reported that RVR was set to increase its current haulage capacity by 50 per cent after its first 120 of 480 heavy-duty railway wagons arrived in Kenya. Apparently, each of the wagons, which were built by the China CNR Corporation, had the capacity to transport 60 tonnes per trip, an increase from a then current 40-tonne load capacity per wagon. [32]

In 1994, I travelled from Mombasa to Kampala by train. I was on my own and so experienced a few problems with leaving luggage in my compartment when eating in the dining car. My luggage was expertly searched and some of my well-hidden cash (US dollars) went missing. The culprit had the confidence to approach me before I had noticed the loss to change some of the currency for him!

The theft apart, I had a wonderful time. The pictures that follow are not my own and were taken in the early years of the 21st century under the tenure of Rift Valley Railways (RVR). The journey that I enjoyed from Mobassa to Kampala was only available for a few years in the 1990s. The sleeper services in Kenya travelled from Kisumu through to Mombasa. Apart for the repainting of the carriages which were originally built in the UK, there seems to be little difference in the travelling conditions – silver service on starched table cloths, two berth cabins with connecting doors to the immediately adjacent cabin, etc. The first two images are taken from the pre-RVR era. The first three are my own (low quality slides) from 1994.

The pictures of the sleeper coaches and the dining car are taken from a blog entitles ‘The Man in Seat Sixty-One’ by Mark Smith. [31]

The sleeper train from Nairobi to Mombasa no longer travels as it has been replaced by the SGR line. However, the SGR does not access the centres of Nairobi and Mombasa. The image below shows the metre-gauge train arriving at Nairobi SGR terminus with a train from the much older city centre station.

A metre-gauge train in RVR colours has just arrived at the Nairobi terminus of the SGR line. [31]

Passenger coaches on the SGR are built in China, modern and air-conditioned… [31]