In 1977 the East African Community (EAC) collapsed. The East African Community (EAC) is now an intergovernmental organization composed of six countries in the African Great Lakes region in eastern Africa: Burundi, Kenya, Rwanda, South Sudan, Tanzania, and Uganda. John Magufuli, the president of Tanzania, is the EAC’s chairman. The organisation was founded in 1967, collapsed in 1977, and was revived on 7 July 2000. [4]

In 2008, after negotiations with the Southern Africa Development Community (SADC) and the Common Market for Eastern and Southern Africa (COMESA), the EAC agreed to an expanded free trade area including the member states of all three organizations. The EAC is an integral part of the African Economic Community.

Inter-territorial co-operation between the Kenya Colony, the Uganda Protectorate, and the Tanganyika Territory was formalised in 1948 by the EAHC. This provided a customs union, a common external tariff, currency, and postage. It also dealt with common services in transport and communications, research, and education. Following independence, these integrated activities were reconstituted and the EAHC was replaced by the EACSO, which many observers thought would lead to a political federation between the three territories. The new organisation ran into difficulties because of the lack of joint planning and fiscal policy, separate political policies, and Kenya’s dominant economic position. In 1967, the EACSO was superseded by the EAC. This body aimed to strengthen the ties between the members through a common market, a common customs tariff, and a range of public services to achieve balanced economic growth within the region. [7]

In 1977, the EAC collapsed. The causes of the collapse included demands by Kenya for more seats than Uganda and Tanzania in decision-making organs, [8] disagreements with Ugandan dictator Idi Amin who demanded that Tanzania as a member state of the EAC should not harbour forces fighting to topple the government of another member state, and the disparate economic systems of socialism in Tanzania and capitalism in Kenya. [9] The three member states lost over sixty years of co-operation and the benefits of economies of scale, although some Kenyan government officials celebrated the collapse with champagne.[10]

The EAC was revived on 30 November 1999, when the treaty for its re-establishment was signed. It came into force on 7 July 2000, 23 years after the collapse of the previous community and its organs. A customs union was signed in March 2004, which commenced on 1 January 2005. Kenya, the region’s largest exporter, continued to pay duties on goods entering the other four countries on a declining scale until 2010. A common system of tariffs will apply to goods imported from third-party countries. On 30 November 2016 it was declared that the immediate aim would be confederation rather than federation. [11]

The collapse of the East African Community saw the railways split three ways and the stock was similarly dispersed. Inevitably stock was renumbered. A typical example is 4-8-0 steam locomotive No. 2401 which ended up in Uganda and can still be found at Tororo in a dilapidated state. Kenya took No. 2412 and renumbered it for the class leader No. 2401. It is this renumbered loco which can be seen at Nairobi Railway Museum.

From 1977 onwards existing classes of locomotive were supplemented by others.

In 1977, the Kenya Railways Corporation was formed. Over the next 30 years, Kenya’s railway network deteriorated from a lack of maintenance. By 2017, only half of Kenya’s metre-gauge railways remained in operation! [12]

In November 2006, the Rift Valley Railways Consortium took over the operation of railways in Kenya and Uganda under a 25-year concession. [13] However, RVR was unable to turnaround railway operations, hampered by corrupt management and aging infrastructure. In 2017, the World Bank found that a $22 million loan extended for the purchase of refurbished locomotives had been diverted into a shell company controlled by RVR executives. [14] The Uganda Railways Corporation issued a notice of default to RVR in 2016, [15] and the Kenya Railways Corporation terminated the concession in April 2017. [16] 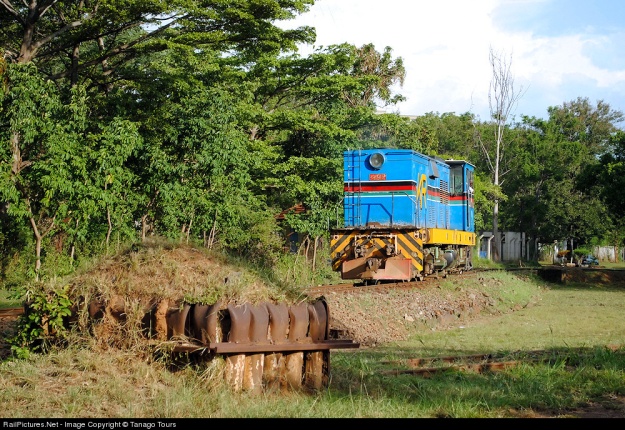 Class 62, No. 6255 Henschel has arrived at Kisumu with the through carriages from Butere, bound for the Nairobi night train. Some shunting had to be done and then No. 6255 headed off to the shed, ending the duties for today. © http://www.tanago-tours.com. [39] 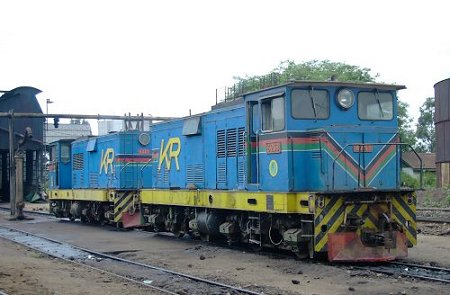 A pair of 62 Class diesels at Nairobi’s old steam shed with its water crane now devoid of its hose (right), © Graham Roberts. [40]

In 1998, five of the class 93 locomotives were leased to Magadi Rail, a subsidiary of the Magadi Soda Company. They were used to operate soda ash trains from Magadi along the 150 km (93 mi) branch line to Konza, which is also leased to Magadi Rail. [32]. In 2007, they were returned to their owner. [33]

As at 2011, all members of class 93 and 94 formed part of the fleet of the Rift Valley RailwaysConsortium. They were all still serviceable and suitable for rehabilitation and upgrading. [34]

Freight train on the way to Uganda near Nakuru, © Daniel Wipf. [36] 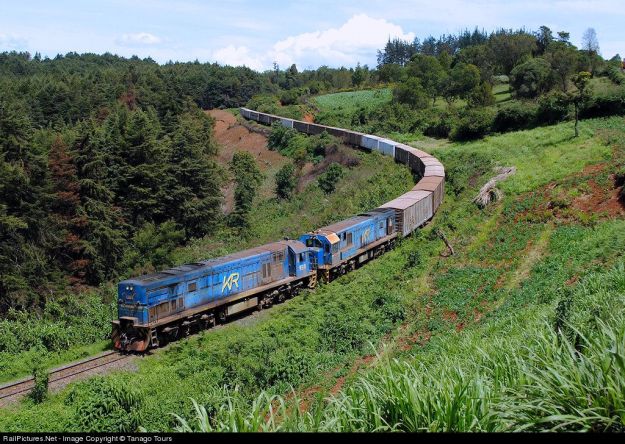 Kenya Railways Class 94 at the head of the train I travelled on from Mombasa to Nairobi in 1994, just about to leave Mombasa Railway Station. 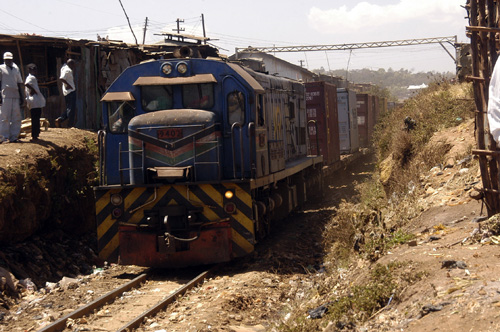 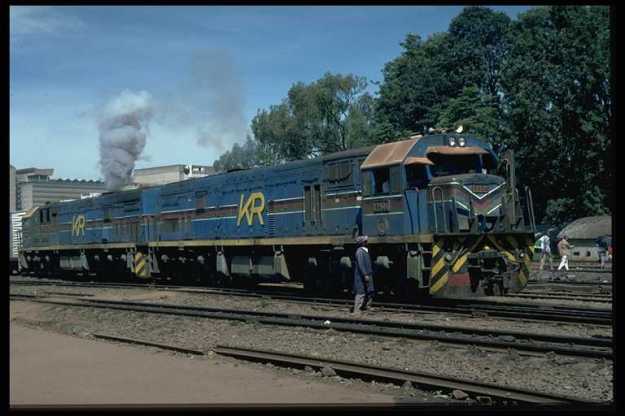 Its operation after the demise of the EARC was hampered by civil war and inefficient management in Uganda. A significant number of new locomotives were purchased in the time of Idi Amin. [59]

After the EAR breakup URC got the following locos:

Uganda Railways were joint recipients of the 2001 Worldaware Business Award for “assisting economic and social development through the provision of appropriate, sustainable and environmentally complementary transport infrastructure”. [21]

The then daily 16.00 train to Kasese stands ready in Kampala station for its overnight journey west with loco 73U05 () on 26th March 1984, (c) torgormaig on the National Preservation Forum. [52]

The two images immediately above show two Henschel locomotive types in Uganda Railways livery which were eventually renumbered as Class 73. The first image shows No. 73U15 [48] and a class-mate. The second shows No. 62U06. [49] The one below shows No. 73U33 (formerly No. 62U33) at Kampala Railway Station. [51]

In 2005, the Rift Valley Railways Consortium (RVRC) from South Africa was awarded a concession to manage URC and Kenya Railways. RVRC was scheduled to take over operations on 1 August 2006. However, the East African Standard reported on 28 July 2006, that the take-over was postponed until 1 November 2006. [22] It actually took place in November 2006 and was scheduled to last for 25 years. [23]

73U27 still in Uganda Railways livery but in charge of a RVR train in Kampala on 13th March 2012, the day after RVR took over local services. [53]

On 9 October 2008, Toll Holdings of Australia announced that it had entered into a contract to manage the Kenya-Uganda railway, replacing management by RVRC. Officers from Toll subsidiary Patrick Defence Logistics would manage the railway after the transition. [25]

Because of extensive fraud [14] the Rift Valley Railways concession was terminated and in late February 2018, URC finally took possession of the concession assets and resumed operating the metre-gauge railway system in Uganda. [20][26]

Old and new juxtaposed. A Class 93 in RVR livery passes one of the new SGR railway stations in Kenya. [46]

Newer locos of the Class 96 are shown in the two photos immediately above. The first is No. 9616 in charge of a goods train passing the SGR station at Mtito Andei, Kenya, (c) Jeff Angote. [43]  The second shows three of the class at Kampala Railway Station, No. 9617 is easily identified and the second locomotive is probably No. 9609. [44]

Rift Valley Railways purchased a number of locomotives from General Electric in 2014 and gave them the Class No. 96. RVR held a ceremony on 18th September  2014 to mark the commissioning of the first three of 20 second-hand GE B23-7 locomotives which were acquired from the USA at a cost of US$25m (2.2 billion Kenya Shillings) and converted from standard to metre gauge. These were  the first locomotives delivered to Kenya or Uganda since 1987. The remaining 17 arrived over the following five months.

By 2017 the relationship with both countries governments had soured completely. Both countries accused RVR of failing to live up to the terms of the concession, including non-payment of concession fees amounting (in the case of Uganda) to US$ 8.5 million equivalent to 31 billion Shillings. RVR is also said to be debt-ridden, owing hundreds of millions of dollars to lenders like the African Development Bank, German Development Bank, Infrastructure Crisis Facility, and Equity Bank. [29] There is evidence of corruption at the highest level in the company, as noted above, a $22 million loan extended for the purchase of refurbished locomotives had been diverted into a shell company controlled by RVR executives. [14]

The concession in both countries was terminated in the ‘winter’ months of 2017/2018.

In 2011, Kenya signed a memorandum of understanding with the China Road and Bridge Corporation to build the Mombasa–Nairobi Standard Gauge Railway (SGR). Financing for the US$3.6 billion project was finalised in May 2014, with the Exim Bank of China extending a loan for 90% of the project cost, and the remaining 10% coming from the Kenyan government. [17] Passenger service on the SGR was inaugurated on 31 May 2017. [18]

As of June 2018, work is underway to extend the SGR to Naivasha. [19] There are plans to broaden the network of standard-gauge lines considerably as shown below. [30]

The SGR in Kenya currently runs from close to Mombasa to close to Nairobi. The style of the line and its stations is/are futuristic. A few images give a good impression of the line. It has not been universally well-received and particular concern has been expressed about access to both termini from their respective cities.

One of the many viaducts allowing wildlife free access under the new SGR railway, [55] 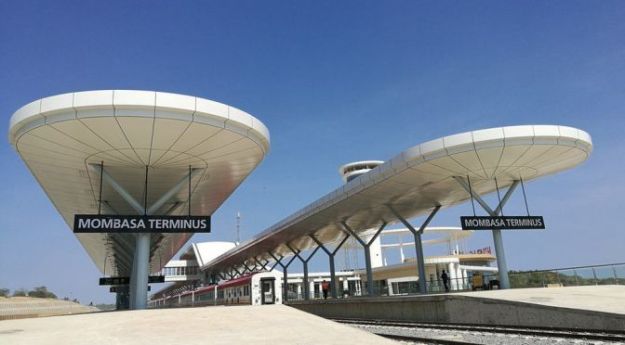