Health Warning!! This blog of 2017 is based on some mis-information!! It must be considered to be a ‘Might Have Been’ Scenario!!

In this scenario, the route of the Levens tramway running North from Tourrette-Levens surprisingly did not follow the main road. Instead it diverted to St. Blaise before following the St. Blaise to Levens road into Levens.

The most startling structure to be built on the route was an 80 metre long suspension bridge just outside St. Blaise. Built for the tramway in 1908 it also carried the St. Blaise to Levens road.

This graceful suspension bridge was destroyed during the Second World War.

It was not rebuilt until 1953. The new bridge was similarly striking although a concrete arch construction. By this time the tramway was long-gone.

For the first part of the route from Nice, please see the following link:

The tramway route from the southern outskirts of Tourrette-Levens probably followed approximately the route of  Chemin de la Gorghette and Chemin de Saint Sebastien before rejoining the present M19. To get to St. Blaise the tramway would have had to follow the M719, the road to Aspremont. Any other route to St. Blaise would require extreme gradients. Sadly, however, I can find no evidence to support the assumption that Aspremont would have been included in the tramway system.

The route from Saint-Blaise to Levens would have been shown by some of the pictures below. 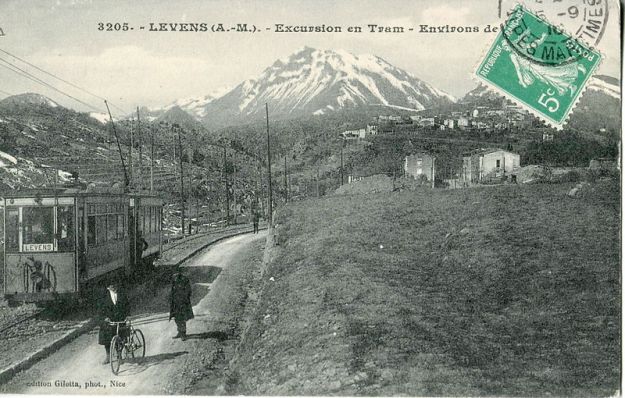 The final photograph shows the terminus at Levens. The location of this picture is however not clear in my own mind. I believe that the first terminus at Levens was probably on the Avenue General de Gaulle. The line was, however, extended into the centre of the village, it is highly possible that this is a view of that location, which is the point at which the Nice to Levens bus terminates right next to the heart of the perched village. I’d appreciate any comments readers are able to make on this.

For a re-interpretation of this story, this time based on better evidence, please see my later blog from March 2018!