We got the bus to Eze today (14th November 2017) and then walked for a few kilometres along the Moyenne Corniche before dropping down one of the side roads to the Basse Corniche and sitting on the beach at Eze-sur-Mer eating Baguette and cheese for lunch. We then got on the Ligne d’Azur 100 bus back to Nice. 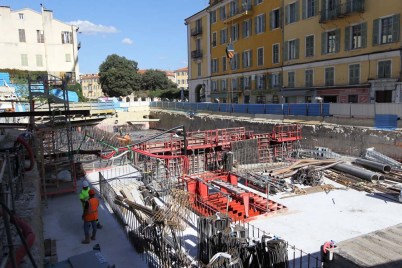 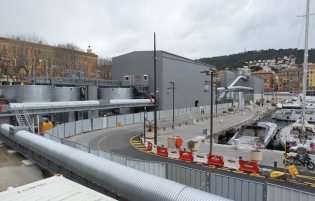 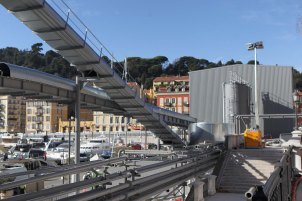 The terminus for the 100 is in the Port of Nice, which is now dominated by two large grey steel buildings which house the concrete plant for the underground works for Ligne 2 of the Nice tramway. Eventually the location of these buildings will be the terminus of the line, right at the head of the Port and a very quick journey from the Port to the Airport.

Ligne 2 will drastically reduce traffic volumes in the city as the East-West/West-East movements dominate traffic flows in the city. There is an amazing amount of detail to be found on-line! Try some of these links:

http://tramway.nice.fr/ligne-ouest-est/projet-ouest-est/tout-sur-le-projet; (retrieved 14th November 2017) – this site includes a series of links to a variety of material including the environmental impact study.

https://www.intelligenttransport.com/transport-news/18414/tram-design-revealed-for-the-east-west-line-of-the-nice-cote-dazur-metropole; (retrieved 13th November 2017) – details are provided of the Alstrom trams to be used on the route.

http://tramway.nice.fr/ligne-ouest-est/projet-ouest-est; (retrieved 13th November 2017) – the official site for the project.

In addition to the grey steel buildings at Nice Port, major sites are active as new stations are formed either above or below ground. Examples include the stations at Garibaldi and Alsace Lorraine.

The new line cuts across Nice from west to east (or east to west, if you like). The underground section will run from Nice Port underneath the Old Town to Garibaldi, following onto Durandy (adjacent to Place Wilson). There will also be a station located at Jean Medecin (where it intersects with the ligne 1), and at Alsace Lorraine (the garden in Musiciens) before the line remerges above ground at Grosso. From here it will continue towards the airport, running parallel to the Promenade des Anglais. 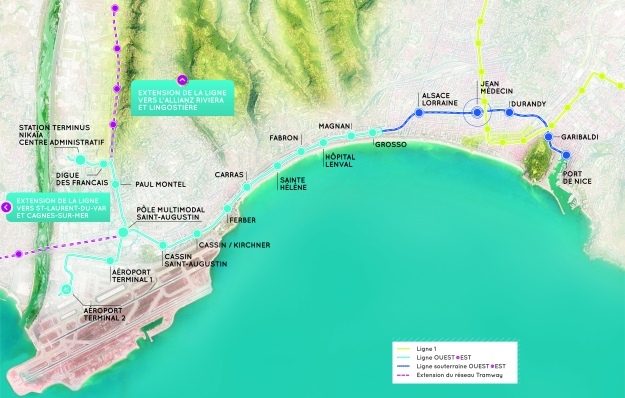 The project began in October 2013. First, various excavations had to be undertaken around the route of the underground line to ensure that sensitive archaeological sites were properly evaluated and protected. At the western end of the project a series of enabling engineering works were required including significant work on the St. Augustine railway bridge, a new access bridge to the airport; the diversion of underground utilities.

In November 2013, contracts were drawn up and following a public procurement procedure, both the tunnel and underground station engineering construction were awarded to TBM of the Thaumasia Group, led by construction giant Bouygues TP- a name you may recognise, they are also one of the biggest mobile phone networks in France. It took over 4 months for the contract to be signed. It was April 2014 before the design-build contactor started work on the design drawings for the underground tunnel and the stations. It was September 2014 when the excavation work for the tunnel started.

By spring 2015, the maintenance and development strategy for the tram service had been completed by the local government body, the CADAM Nikaia. In April 2016, work commenced on the Place Durandy station. September 2016 saw engineers starting on the new Place Garibaldi station.

Tunnel works continued with the input shaft started in December 2015 and the tunnel boring machine at work by May 2016. 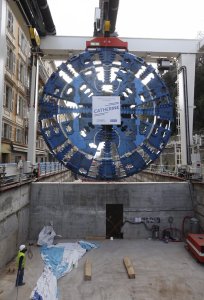 The stations at Jean Medecin and Victor Hugo were started in late 2015. Above ground rail construction is now well underway (November 2017) and a new tramway maintenance depot is nearing completion. It is still likely that by November 2018 the overground element of Ligne 2 will be operational with the underground section operational by early 2019.

The implementation of the tramway project has already drawn in significant investment to the Riviera. When up and running, the line will reduce the journey time from Nice Port to the Airport to just 26 minutes.