The Cornwall Minerals Railway developed out of a series of older Tramroads which served the Cornish Mining Industry. It owned and operated a network of 45 miles (72 km) of standard standard gauge railway lines in central Cornwall. It started by taking over an obsolescent horse-operated tramway in 1862, and it improved and extended it, connecting Newquay and Par Harbours and Fowey.

Wikipedia tells us that the Cornwall Minerals Railway had a chequered history having been hurt by a collapse in mineral extraction due to a slump in prices. But after a period in bankruptcy it recovered enough to take over a defunct route between Fowey and Lostwithiel – the Lostwithiel and Fowey line.

In 1896 it finally sold its line to the Great Western Railway which had been leasing it for some time.

Its main passenger line from Par to Newquay is still in use as the Atlantic Coast Line, and also carries some mineral traffic, but the Par to Fowey line has been converted to a private road. [2] 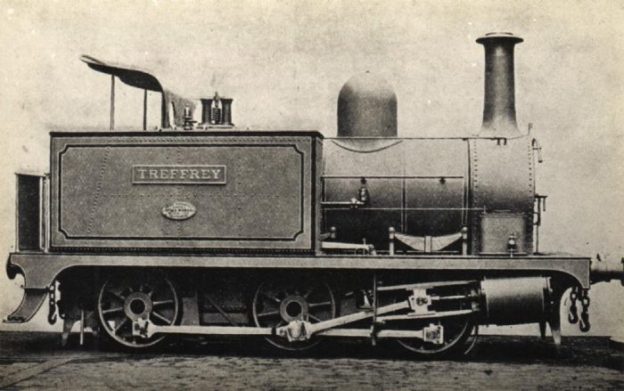 CMR No. 1, Treffrey was built, along with all of the CMR locomotives, by Sharp, Stewart & Co. Ltd of Manchester. It was named for Joseph Austin Treffrey but the name plates were mis-spelt. These locos were intended to work in pairs, back to back and it is likely that the lack of rear bunker and the open cab were intended to facilitate this way of working. There is no evidence to suggest that the traffic on the railway was ever large enough to justify this intention. [1][2]

The Cornwall Minerals Railway was adventurous in its intentions and purchases. It anticipated far more traffic from the mines than was to materialise and bought 18 (yes, eighteen) 0-6-0T steam engines to serve the anticipated high demand. [1] When the line was leased to the GWR in 1877, the new lease-holders quickly realised that the over provision of motive power was a financial drain on the Line. The GWR returned 9 of the engines to their makers, leaving 9 to serve the needs of the Line. [1:p30]

Of the 9 remains locos, a further one was sold by 1883 to the Sharpness New Docks Company and based on the opposite side of the River Severn from the Forest of Dean. [1:p31]

The last of the 9 locos returned to Sharp, Stewart was sold to the Colne Valley & Halstead Railway before ending up at a colliery in Northumberland. [1: p30]

This is the first article of what I hope will be a series about the Cornwall Minerals Railway. My plan is to take a holiday in the area, Covid-19 permitting in the Autumn (of 2020).

2. https://en.m.wikipedia.org/wiki/Cornwall_Minerals_Railway, accessed on 17th May 2020.