This post continues a series of reflections on the tramway network in and around Nice which are based on Jose Banaudo’s French language book “Nice au fil du Tram Volume 1: Histoire.” The text below is based on a tranlation from Jose Banaudo’s book. [1]

From 1921 onwards the TNL grew closer to its counterpart in Paris and in 1927 it was integrated into Parisian Group and the TNL headquarters were moved to Paris. Its board began to be Chaired by the Chair of the wider group and a new director of the TNL was appointed, Mr Jacques Schopfer, formerly a rolling stock and traction engineer.

The TNL was now tied to the dictats and intentions of the STCRP, for better or for worse! At the end of the 1920s the tramway was no longer seen as a fast, safe and efficient means of transport, but rather as an obstacle to traffic and an obstacle to progress towards the free movement of cars.

Banaudo says that after initially supplementing their existing network with buses, the public transport operators in both Nice and Paris tried to convert most of the existing lines to buses. They were encouraged by public opinion, the press, tourist information offices, car clubs and many elected officials, both in the Alpes-Maritimes General Council and in the city of Nice. It is not surprising that the new mayor elected in December 1928, Jean Médecin, made the removal of the tracks in Place Masséna and on Avenue de la Victoire one of his election promises.

While these debates were taking place in the city of Nice, work to extend the ‘departmental’ lines at Levens and L’Escarène was suspended and the General Council considered using the infrastructure built to establish roads there.

In the autumn of 1926, the valleys behind Nice were hit by torrential rains. Damage to the TAM network, the lines in the valleys of l’Estéron, Haut-Var, Tinée and especially the Vésubie occured and a massive landslide engulfed the village of Roquebillière and about twenty of its inhabitants died. Closer to the coast, the TNL lines of the Paillon basin were also affected. On 18th November, the flooded river damaged the permanent way on the La Grave-de-Peilie branch, but tram traffic was able to resume on a temporary detour on 15th December.

On 1st December 1927, new arrangememts replaced the city of Nice with the State as the licensing authority for the urban network and ratified the creation of new bus lines. This was approved by a ministerial decree on 5th March 1929. In the spring of 1928, agreement was reached with the General Council to only maintain tram lines where absolutely necessary, particularly when the freight service so required; otherwise, tramway routes would be replaced by bus services.

So, only the rural lines to Contes, La Grave and Sospel were retained out of the wider departmental network, all other lines would be replaced by bus services.

Banaudo comments that passenger numbers were dropping rapidly and there were very few signs of hope. On 30th October 1928 the PLM inaugurated its international service Nice-Breil-Cuneo. The construction work for this line had been a major part of the freight traffic on both the La Grave and Sospel lines for years. The new line provided a much faster link to the communities served originally by the trams. In Sospel alone, the average number of tram passengers fell by 51% and the tonnage of goods by 58%!

1929 marked the beginning of the end for the departmental tramways. The TAM lines to Estéron, Vésubie, Haut-Var, Grasse and Bar closed in April and May. The TNL closures began in the autumn. With the development of car traffic, the elimination of the tramway was considered a priority on coastal arteries. The first line hit by the road-building programme was Nice – Antibes, the Bridges and Roads Department widened the RN7 onto the shoulder occupied by the tramway. As a result, tram traffic ceased on 29th October 1929 between St. Laurent-du-Var and Antibes. The service was replaced by buses.  The few power cars kept in Antibes for its urban service were isolated from the rest of the network, sheltered and briefly maintained in the shed near the PLM station. After seven months of this arrangement that service closed on 1st June 1930.

In April 1930, the General Council closed the Monte-Carlo line, the service had already effectively been replaced by a private contractor who used comfortable coaches and frequent departures, every ten or even five minutes during rush hour! 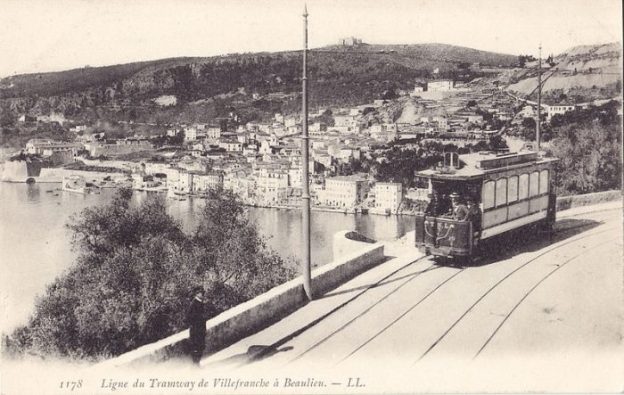 The line between Villefranche and Beaulieu along the Base Corniche [2]

The coastal line was gradually converted to buses. On 9th March 1931, the tramway was closed between Villefranche, Pont-St. Jean, St. Jean-Cap-Ferrat, replaced by a road service. On 18th June the length between Nice and Villefranche gave way to a suburban bus service.

Two lines which took so much effort to build and operate were then closed. The first was the Menton to Sospel line. 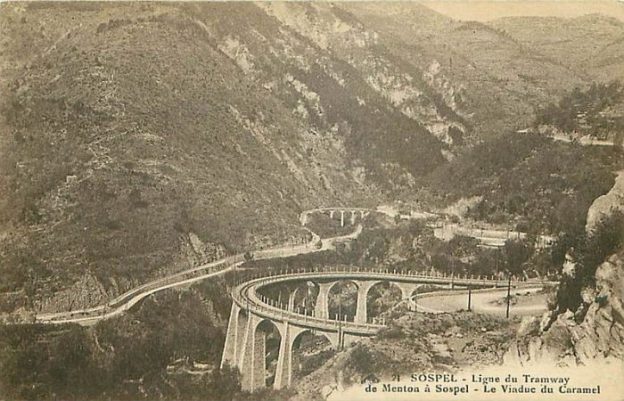 The snaking route of the Menton to Sospel tramway viewed from behind the Viaduc du Caramel. [4]

For more information about the Menton to Sospel tramway please see the following links:

The traffic on the Menton to Sospel line collapsed after the opening of the Nice to Cuneo railway line. It was closed and replaced by a bus service. The route had only been in service for 19 years.

The next to close was the Nice to Levens line. Details of the route to Levens  can be found on the following links: 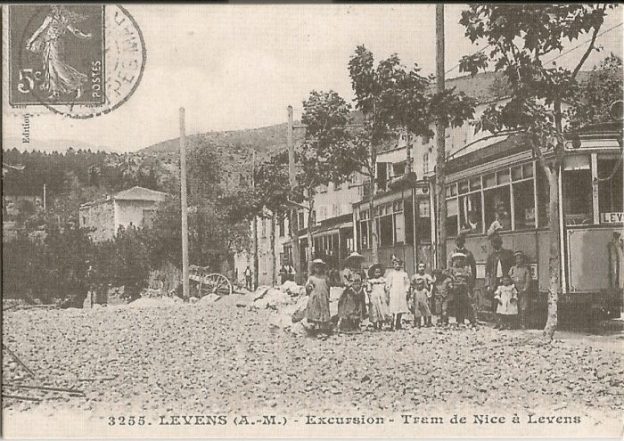 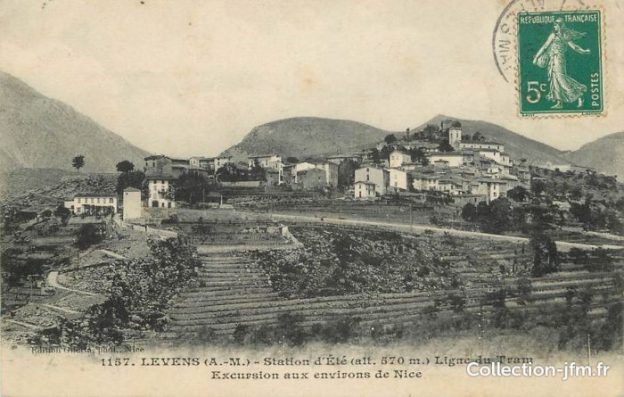 Two shots of the station at Levens. It had been intended to extend this line from the station into the village of Levens and a tunnel was built to make this possible. after all 5hat expenditure the extension was never opened. [5][6]

The Principality of Monaco did not want to be left out of the trend towards the use of buses. On 8th May 1931, the TNL signed an agreement with the Monaco government to replace two tram services, No. 41 (between Visitation, place d’Armes and St. Roman) and No. 42 (between Monaco Station, place d’Armes and the Casino) with new bus services. Three bus services replaced the two tram routes and a further two bus lines were soon added. 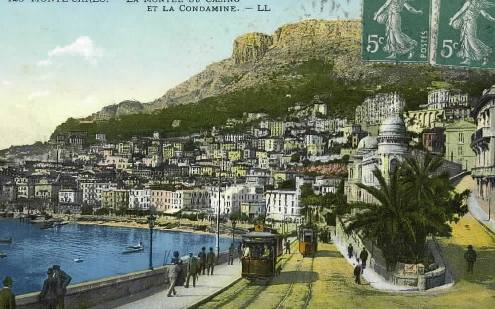 However, the tramway was not yet totally excluded from Monaco since the TNL line to Menton, still crossed the eastern part of Monaco between the Casino and St. Roman. However, on 28th May 1931 the TNL signed an agreement with the authorities in Menton to prepare the town for the end of tramway services and in January 1932 both the remainder of the Sospel line and the line from Monte-Carlo to Menton were closed.

The bus fleet was not yet up to full strength and it took some months to completely close the tramways around Menton. So it was not until 1933 that the network was finally abandoned.

For a short period of transition, the TNL organized a bus route between Beausoleil and La Turbie to replace the rack railway whose operation had just been suspended following a fatal accident in March 1932. The service operated from 25th April to 31st July 1932 before is was passed to a local company.

In less than three and a half years, large parts of the TNL tram network had been closed with the full support of various statutory bodies and the local press.