I hope this will be the first of a short series of posts looking at some of the 762mm lines in Japan. …….

The Kurobe Gorge Railway (Kurobe Kyōkoku Tetsudō Kabushiki Kaisha), or Kurotetsu  for short, is a private, 762 mm (2 ft 6 in) narrow gauge railway company operating the Kurobe Gorge Main Line along the Kurobe River in the Kurobe gorge area of Toyama Prefecture, Japan. The adjacent maps show the  location on the Gorge. It is marked with the red flags which actually pin-point Unazuki Station. 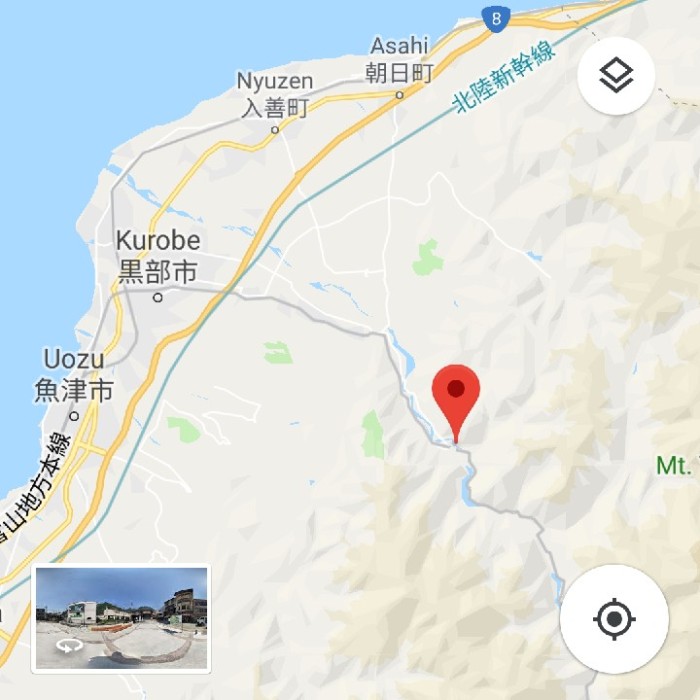 To fulfil domestic electricity demand, the Japanese government began surveying the Kurobe River in 1909 for the Kurobe HEP Plant Project. In 1923, the Japanese government began building a 762mm narrow-gauged railway in Unazuki to transport equipment and personnel to the site. Later on by 1926, the 11.8km long “Kurobe Gorge Railway” reached Nekomata. It was extended to develop the HEP plant. Finally in 1937, the railway reached a length of over 20km and reached Keyakidaira. The line to Nekomata operated on a 600V DC supply. The full route from Unazuki to Keyakidaira is shown in the two map excerpts below. [5]

The present railway was used for the construction of the Kurobe dam for the Kansai Electric Power Company, which was completed in 1963; Kurotetsu was spun off from the power company in June 1971, but remains a wholly owned subsidiary. At its remote terminus, the Main Line links to Kurobe Senyō Railway, which is not open to the general public. [6] 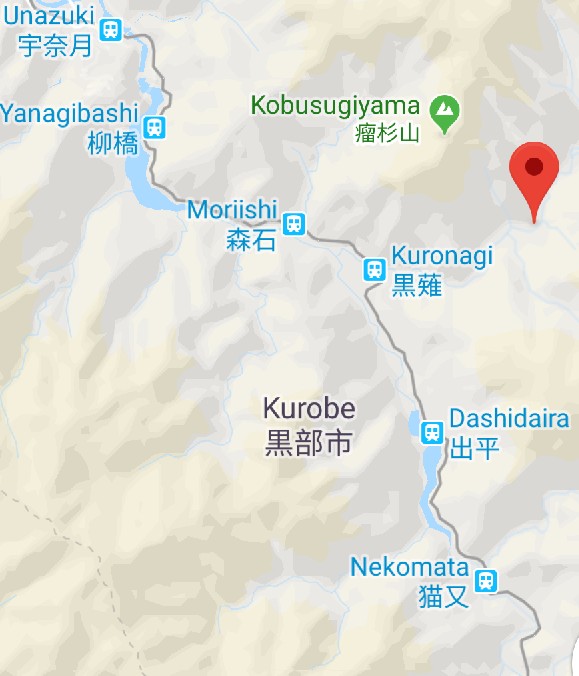 In 1951, the Kansai Electric Power Company was formed to provide electric power for the Kansai region of Japan. Shortly after their formation, the area suffered from drought which caused power rationing. The drought, along with the rapid growth of post–World War II Japan, pushed the company to increase their generating capacity. After a series of geological and hydrological studies of the Kurobe River and Gorge, it was announced in late 1955 that the Kurobe Dam would be constructed. [2][4] Construction began in July 1956 but problems quickly arose while transporting material to the construction site as only one small railway existed through the narrow gorge. [3][4]

Although the railway was built to transport construction materials and personnel, it passed through amazing scenery and a passenger service started in 1953 primarily as a tourism venture. Initially, the journey was considered to be dangerous and various warnings were printed on passenger tickets. [5] As we have already noted, in 1971 a new company was formed by Kansi Electric Power Co., Inc which it named as the “Kurobe Railway Co., Ltd.” This new subsidiary invested, gradually, in better passenger rolling stock. In 2008, the company operated 27 locomotives, 138 passenger carriages and 322 freight wagons. [6] 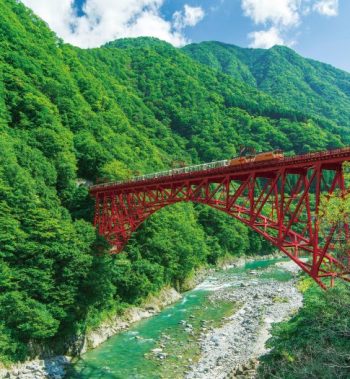 En-route from Unazuki to Keyakidiara trains first cross a large red steel truss arch bridge which is shown in the adjacent picture. [1] The Shin-Yamabiko (Mountain Echo Tree Spirit) Bridge. The name (yamabiko) was earned by the fact that the sound of the train passing by echoes in the town. Immediately after crossing the bridge the railway enters a short tunnel before  following down the eastern side of the Gorge towards Unazuki Dam.

The Dam is the most recent to be built in the Gorge. It was complete in 2001. Before reaching the location of the Dam, trains plunge once again into a tunnel.

Trains do not emerge from that tunnel until well south of the Dam alongside Lake Unazuki and close to one of the power stations in the Gorge – Shin-Yanagawara Power Plant. This hydroelectric power station resembles an ancient European castle and is located on the shores of Lake Unazuki. [1]

Travelling South down the East side of the Gorge, trains pass through Yanagibashi Station before turning East and passing through Moriishi Station.

A train heads east out of the tunnel into Moriishi Station, (c) Ryota23. [8]

Travelling East from Moriisi, the line drifts away form the River Kurobe. The next station is at Kuronagi and is on the Northside of and above one of the tributaries of the Kurobe, the River Kuronagi. Here there is a footpath which leads east along that River to some hot springs. Trains leave Kuronagi Station and immediately cross the River Kuronagi over the Atobiki Bridge. 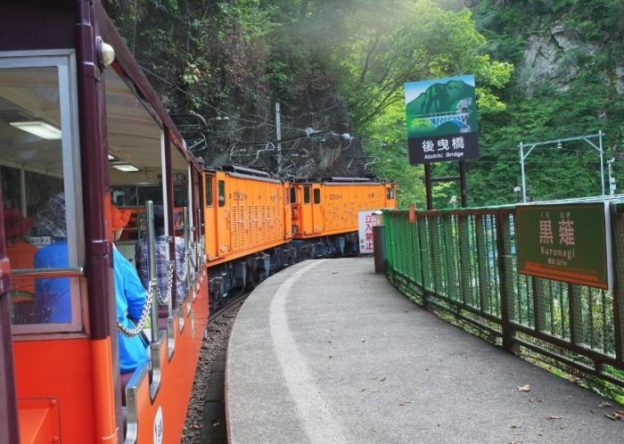 At a height of 60 meters and a length of 64 meters, this bridge spans the steepest and deepest valley along the rail line. The name is derived from the belief that previously mountain climbers would inch backwards away (atobiki) when they came face-to-face with such a seemingly bottomless valley. [1]

After crossing the River Kuronagi, trains head back towards the East side of the Kurobe Gorge, for a short while traveling southwestwards in tunnel and then reverting to a south-easterly course alongside the Gorge of the Kurobe River. At the point where the railway turns south-eastwards it passes through Sasadaira Station.

A train at Sasadaira Station. [11]

The south-easterly course of the Gorge and the railway continues as far as the next Dam at Dashidaira with a station of the same name a little beyond the Dam alongside the lake formed by the Dam.

The next significant location on the route is that of the Kurobegawa Daini Power Station. This can be seen below on the West side of the River Kuobe. 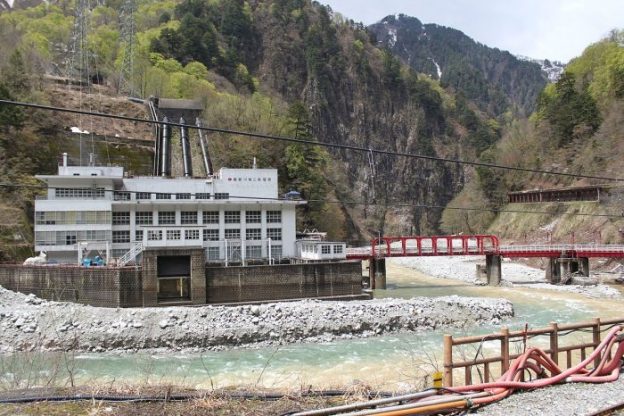 The Kurobegawa Daini Power Station, the railway can be seen under a protective snow roof  on the right side of this picture. [14]

Immediately after the power station is passed the railway enters Nekomata Station which was at one time the terminus of the railway. 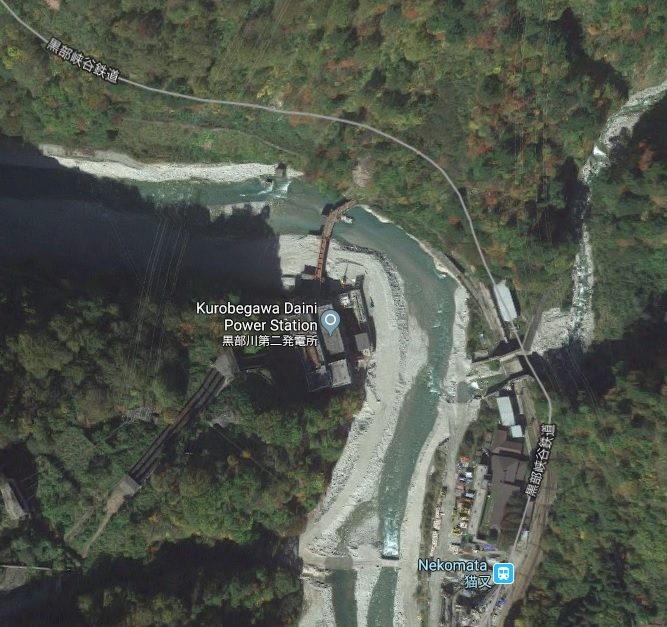 The line continues South on the West side of the Gorge passed the Kanetsuri Hot Springs, through a series of tunnels, and over a series of bridges before reaching the next station at Koyadaira close to the Dam of the same name. 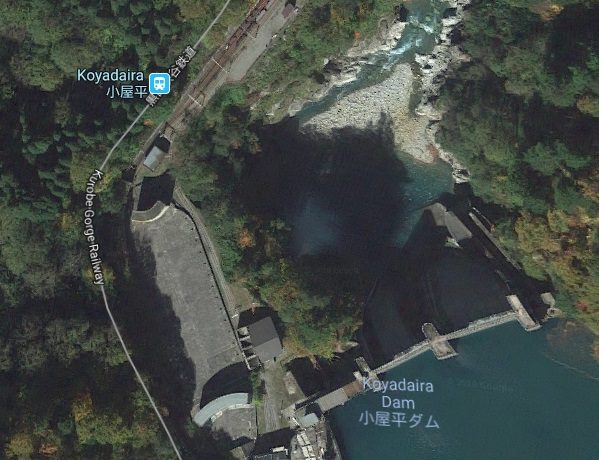 Close to the railway station lies the Keyakidaira Visitor Centre and walks up the valley of the River Babadani are possible across two significant pedestrian bridges.

The first of these is the Okukane Bridge , a vermillion-lacquered bridge spanning the main course of the Kurobe River. The view enjoyed from this 34-meter-high bridge is breathtaking. The second is the Meiken Bridge.