Part 3 of our study of the Ballachulish line will include material from some present day pictures from along the National Cycleway which follows the line together with parts of a description of that journey from another website, the completion of the journey along the line from Kentallen to Ballachulish Station, and a study of the slate mining at Ballachuish which probably was the main justification for the construction of the branch-line.

My spare time over Christmas 2018 has been spent looking at a few older magazines which have been waiting my attention for some time. I have discovered an article in “The Railway Magazine” November 1950 edition. The article was written by H.A. Vallance and entitled ‘From Connel Ferry to Ballachulish’.

A copy of that article can be found in the Railway Magazine Achieve which grants access on payment of an additional sum over and above the annual subscription to the magazine. [26]

We finish our journey along the line from Kentallen to Ballachuish ……

Initially we continue our look around the station at Kentallen.

This image provides an overview of the station site. The footbridge, station buildings, signal box and water tank are all visible as well as the siding on the northeast corner of the site. [8]

The following images were all taken in the mid-1970s by J.R. Hume, after closure of the railway but before re-development. A Mk 3 Cortina is visible in two images which for the officionados may well date the pictures more definitively. They are all available on the Canmore website. [8]

The station from the road-side. [8]

The railway cottages and water tank on the southeast side of the A828. [8]

The station buildings from the Northeast. [8]

The waiting shelter on the west side of the station with Loch Linnhe behind. [8] 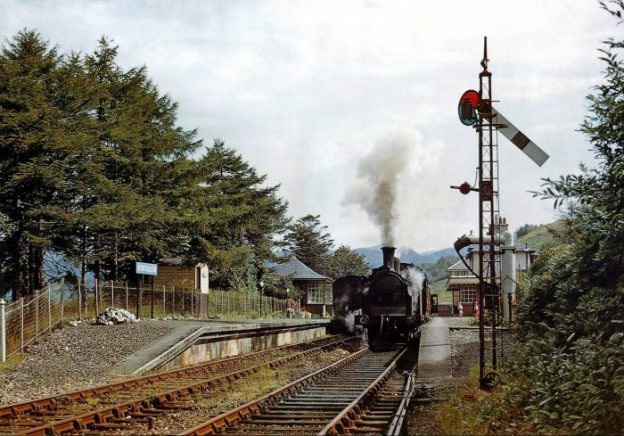 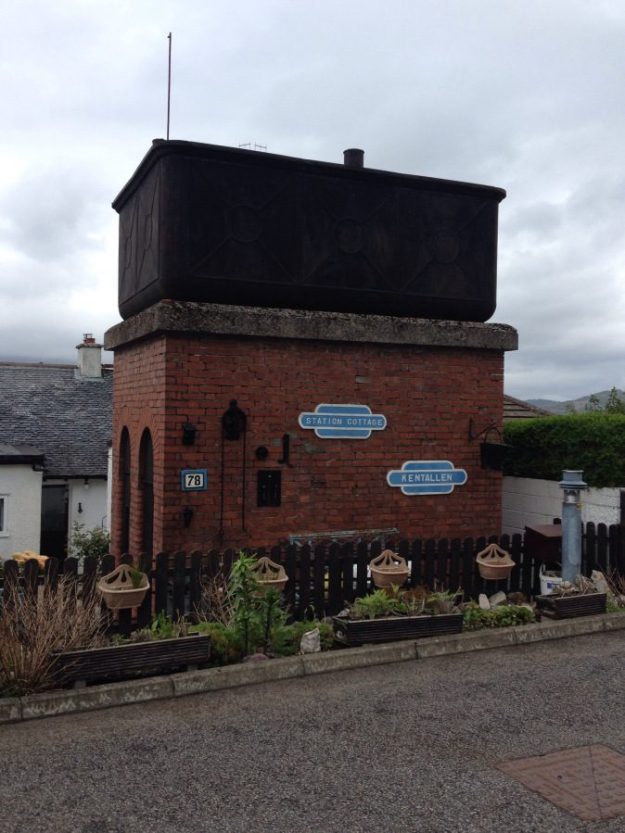 Moving on from Kentallen, the next two images are taken just to the north-east of the station. 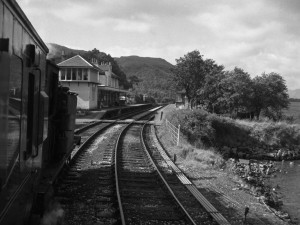 Local pick-up goods approaching Kentallen from Ballachulish in the mid-1960s . [6]

The next station along the line was Ballachulish Ferry, it was reached after a the line had travelled East along the south side of Loch Leven. Close to Ballachulish Pier the A828 crossed the railway on a bridge and then hugged the shoreline as far as the ferry and the hotel.In 2014, we stayed in a bed and breakfast  along this length of the A828 and walked a distance along the track-bed on the old railway line. These next few images show the B&B and the cycleway/path. As you will see below the cycleway/path is marked characteristically along its full length by ornate ironwork.

Part 1 of this short series of posts carried a video of the ferry. Please follow this link:

Some pictures will suffice here, three images in total, of which the third shows the Ballachulish Bridge under construction.

Ballachulish Ferry, before the bridge was started. Looking from the north side, towards Sgorr Dhonuill, © Copyright Ian Taylor. [14] 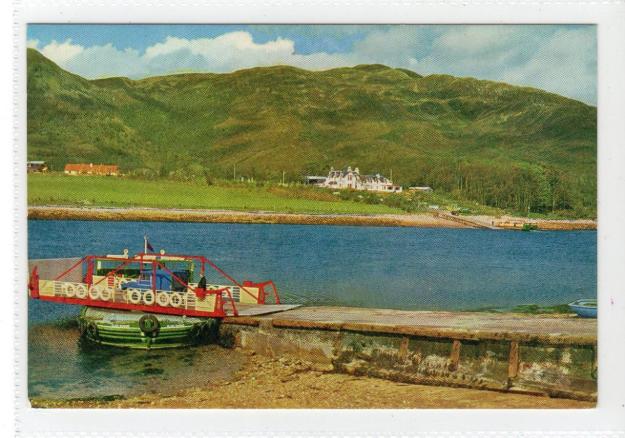 Finally at this location, Ballachulish Hotel and Ferry Slipway [17]

Ballachulish Ferry Railway Station is hidden away inland south of the ferry behind the hotel. It had one platform on the North side of the railway line.

Ballachulish Ferry Railway Station, looking towards the terminus at Ballachulish.[18]

The Callander and Oban Railway were responsible for the construction of the branch-line and for the opening of the station. That company was absorbed into the London, Midland and Scottish Railway during the Grouping of 1923. The station then passed to the Scottish Region of British Railways on nationalisation in 1948, and was closed by the British Railways Board in 1966 [2] when the entire length of the Ballachulish Branch closed.

In the early 1990s the station buildings were converted into a medical centre. Houses have been built in the station yard. The engine shed remained, being used by a local garage until 2015, when it was demolished to make way for more private housing. 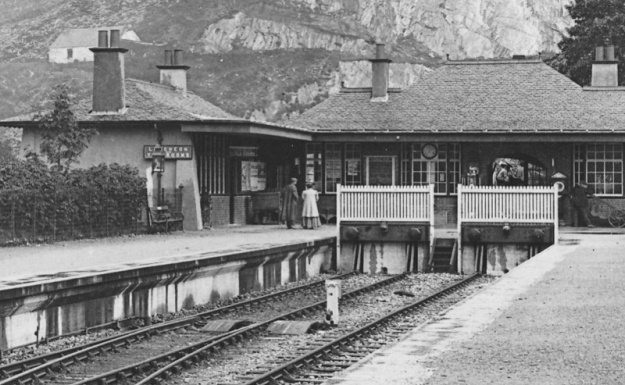 A close up of the station buildings. [20]

Ballachulish Station in the 1950s, (c) Marcel Gommers. A google search produced this picture, but the link failed to operate and the website appears not to exist.

An eye-level view into the station from West along the line. [20]

Ballachulish Engine Shed, used as a garage for sometime before its demolition recently. [20]

The adjacent picture shows the shed acting as a local garage in 2012. [21] 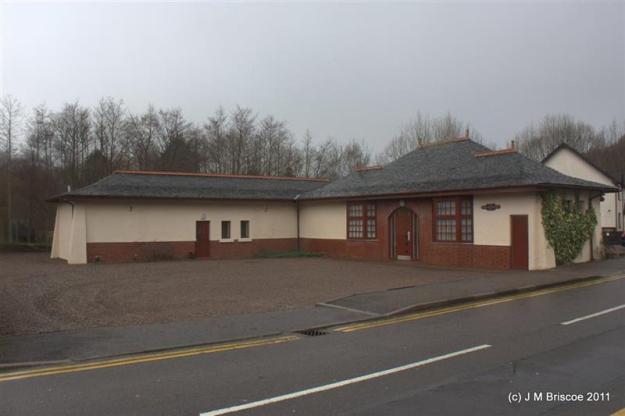 We have travelled the full length of the branch-line and done our best to get an impression of it operating as a railway. As we have done so, we have noted on a few occasions that the railway line is now in use as part of the National Cycle Network Route 78.

We have already seen some of the ornate ironwork which has been used to give this particular part of Route 78 an identity. These next few images highlight other locations along the route where the ironwork has been used.

The cycle-way which follows much of the branch-line is marked by ornate ‘gateways’ and sculpture work as in this image and that below. Details of the cycle-way (Sustrans No. 78) can be found at the end of this post. [5] 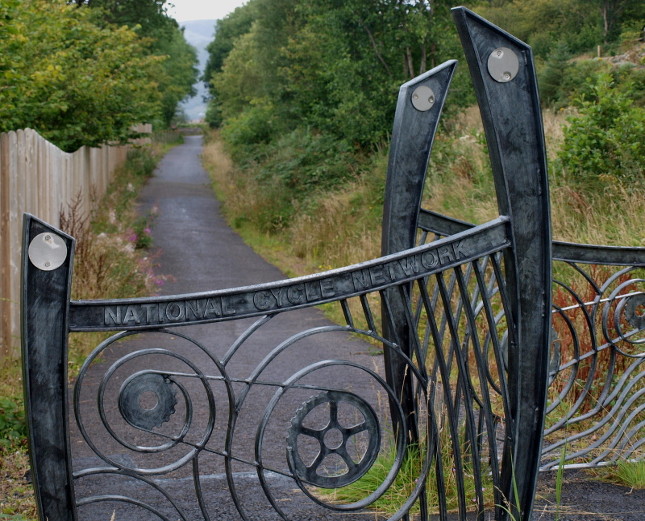 The description of the cycle route on the Sustrans website, which is an excellent way of following the route of the branch-line, follows in italics [4]:

Follow the Route 78 signs over the bridge and then through housing and past Connel Airfield. There is a currently a short gap in National Route 78 here. It is possible to join the main trunk road for just under a mile – but please note that this is narrow high-speed road, and it is not recommended for children or inexperienced cyclists. A footpath heads off to the left through the trees before you reach the trunk road, but in addition to being a bit muddy and overgrown this is not part of the National Cycle Network route. This joins with the beginning of the tarmac path to the south of Benderloch. This area (but not the additional path) is shown in this map link.

A traffic-free path follows the line of the old railway into Benderloch village. From near the primary school, it runs alongside the A828 trunk road to the Sea Life Sanctuary, which has interesting marine displays, other wildlife such as otters, a nature trail and an adventure play area, plus a cafe.

This is a glorious, almost entirely traffic-free section that starts from the east side of the Sea Life Sanctuary car park. There are several crossings of the trunk road on this section, where you should exercise care. The route runs through woodland and then joins minor roads through the settlement of Barcaldine and the forest of Sutherland’s Grove, and along railway path to above Creagan road bridge. Here you will see signs for the Loch Creran Loop, a six mile route on quiet road. Route 78 continues over the bridge. A traffic-free path runs alongside the road to Inverfolla and then the route rejoins the line of the old railway past Appin and Castle Stalker. Look out for the signs for the Port Appin Loop, which takes you down to Port Appin where you can catch the passenger ferry to the Isle of Lismore. After passing Castle Stalker, there’s a bit under a mile where the route shares a quiet access road with road traffic and skirts a layby, followed by more traffic-free path and less than a mile on very quiet minor road. A further two miles of entirely traffic-free path ends at Dalnatrat, near the foot of Salachan Glen.

Between Dalnatrat and Duror is currently a gap of almost two miles in the National Route 78. It has not yet been possible to build a path here and to continue a northbound journey temporarily using the busy trunk road is unavoidable. Please note that this is narrow high-speed road, and it is not recommended for children or inexperienced cyclists, or those on foot. Look out for the cycle route signs to the right as you enter Duror village to take you back onto the National Cycle Network.

This area is shown here on Sustran’s mapping.  There are some rough paths and tracks in nearby woodland to the southeast of the road – but these are not part of the National Cycle Network, they don’t bridge the gap entirely, and the loose surfaces and steep inclines make them relatively challenging even if on an unladen mountain bike or on foot. Please note that current Google based mapping shows a bridge which no longer exists. Openstreetmap currently (Sept 2017) shows the correct details.

Traffic-free path runs from the south of Duror village and loops round on minor road to rejoin the line of the old railway. The path over the hill to Kentallen takes you to the highest point on the route where you get a seat and a wonderful view over Loch Linnhe. The path then heads down to Kentallen, across the road and onto one of the most scenic sections as the railway path hugs the coastline for a couple of miles, before heading inland and emerging just to the south of Ballachulish Bridge. At this junction, you can continue right for another three miles on a traffic-free link path to the village of Glencoe, or turn left to continue on Route 78 over Ballachulish Bridge to North Ballachulish.

Ballachulish Slate Quarries before the arrival of the Railway (1897 OS Map).

Just to the south of the A82 and at the east end of the village of Ballachulish are the fascinating  remains of the Ballachulish slate quarries, which employed up to 300 men at any given time for over two and a half centuries until 1955. Today the quarries have been opened up as a scenic attraction in their own right, and are well worth a visit. [24]

The story of slate quarrying in what was originally known as East Laroch began in 1693, just the year after the Glen Coe massacre took place, a little over a mile and a half to the east. The quarries grew dramatically during the 1700s and slate from here was shipped out to provide roofing for Scotland’s rapidly growing cities. It is recorded that in one year alone, 1845, some 26 million Ballachulish slates were produced.

The arrival of a branch railway from Oban in 1903 gave the quarries a further boost, as it made overland transport of the slates both possible and cheap. The Railway’s arrival was, however, unfortunate timing in one sense, as a major industrial dispute was under way in the quarries at the time over the provision of medical care, which involved the workforce being locked out for a year. Further trouble flared up in 1905, but the quarries remained in business until finally closing in 1955.

Ballachulish slate had one major drawback compared with some of its competitors. The presence of iron pyrite crystals within the slate meant that rust spots and holes were prone to appear in slates exposed to the weather, which of course is a drawback on a roof. Because of this, only about a quarter of the slate actually extracted could be used for roofing, with the remainder finding less lucrative uses or being wasted.

The adjacent images come from the Undiscovered Scotland Website as does the text above, although it has been edited slightly. [24]

Some further images of the quarries have been provided below. They have been sourced from the Canmore Website. [25] Canmore contains more than 320,000 records and 1.3 million catalogue entries for archaeological sites, buildings, industry and maritime heritage across Scotland. Compiled and managed by Historic Environment Scotland, It also contains information and collections from all its survey and recording work, as well as from a wide range of other organisations, communities and individuals who are helping to enhance this national resource. 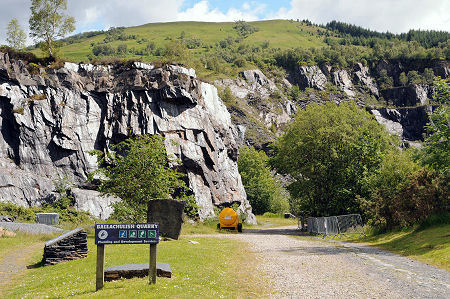 The old road used to pass under the incline. [25] 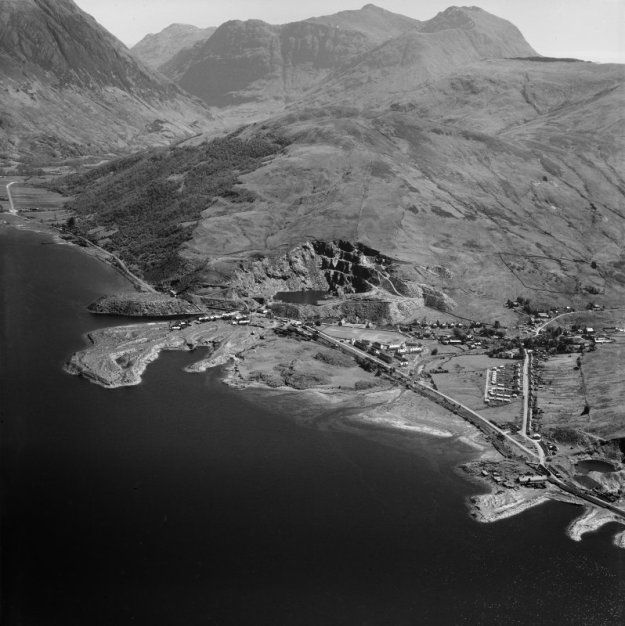 An aerial image of the quarries. The route of the railway line is clearly visible. [25] 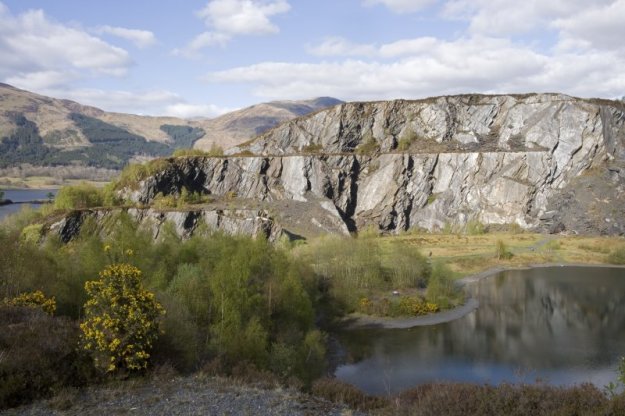 The quarrying operation was of a significant size and lasted for well over two centuries employing around 300 men. [25]

And finally … a video of travel along the branch-line in the 1960s.