I have been researching the history of railways in Japan. My interest has been drawn by the use of Cape Gauge as the early standard gauge in Japan.

Cape Gauge is very close to the Metre-Gauge that many of the secondary lines in France. It is the same track gauge that was used in a number of different British colonies. 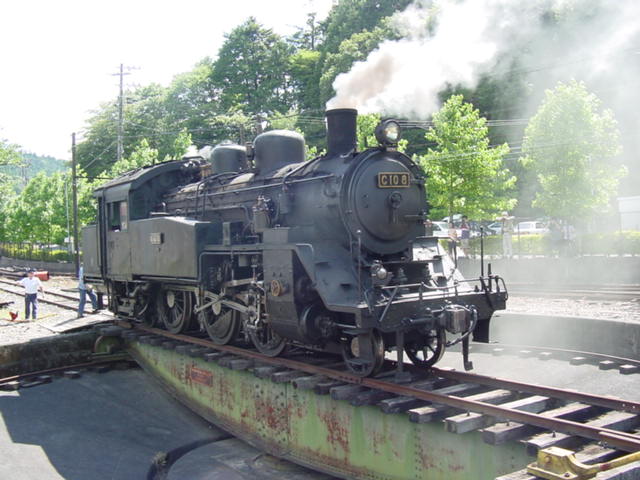 Railways with a track gauge of 3′ 6″ (1,067 mm) were first constructed as horse-drawn wagonways. From the mid-nineteenth century, the 3’6″ gauge became widespread in the British Empire (although it was not used in East Africa or India) and was adopted as a standard in Japan and Taiwan. 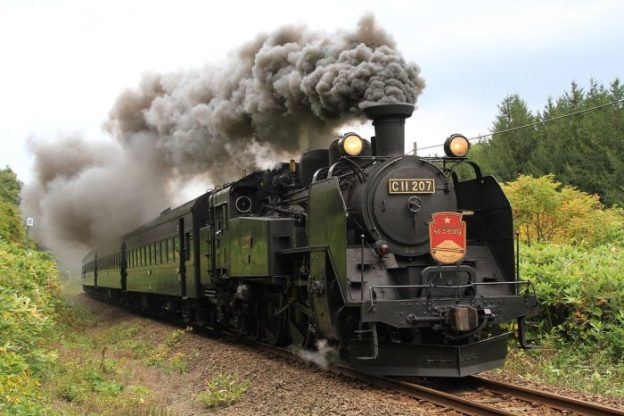 The article on this subject on Wikipedia [1] says that one of the first railways to use 3′ 6″ (1,067 mm) gauge was the Little Eaton Gangway in England, constructed as a horse-drawn wagonway in 1795. Other 3′ 6″ gauge wagonways in England and Wales were also built in the early nineteenth century.

In 1862 the Norwegian engineer Carl Abraham Pihl constructed the first 3′ 6″ gauge railway in Norway, the Røros Line. Japan Railway and Transport Review carried an article about Norwegian Railways in 2002. [35]

In 1865 Queensland Railways were constructed. Its 3′ 6″ gauge was promoted by the Irish engineer Abraham Fitzgibbon and consulting engineer Charles Fox.

In 1871 the Canadian Toronto, Grey and Bruce Railway and the Toronto and Nipissing Railway were opened, promoted by Pihl and Fitzgibbon and surveyed by Wragge as an engineer of Fox.

In January 1872, Robert Fairlie advocated the use of 3 ft 6 in gauge in his book Railways Or No Railways: Narrow Gauge, Economy with Efficiency v. Broad Gauge, Costliness with Extravagance. [4]

1872 also saw the opening of the first 3′ 6″ gauge railway in Japan, proposed by the British civil engineer Edmund Morel based on his experience of building railways in New Zealand. [5].

On 1 January 1873, the first 3′ 6″ gauge railway was opened in New Zealand, constructed by the British firm John Brogden and Sons. Earlier built 4 ft 8 1⁄2 in (1,435 mm) and broad gauge railways were soon converted to the narrower gauge.

Also in 1873, the Cape Colony adopted the 3′ 6″ gauge. [6][7]. After conducting several studies in southern Europe, the Molteno Government selected the gauge as being the most economically suited for traversing steep mountain ranges.[8] Beginning in 1873, under supervision of Railway engineer of the Colony William Brounger, [9], the Cape Government Railways rapidly expanded and the gauge became the standard for southern Africa. [10][11]

Other new railways in Southern Africa, notably Mozambique, Bechuanaland, the Rhodesias, Nyasaland and Angola, were also constructed in 3′ 6″ gauge during that time.After 1876In the late nineteenth and early twentieth century numerous 3′ 6″ gauge tram systems were built in the United Kingdom and the Netherlands.

The precise reason why a track gauge of 3′ 6″ in (1,067 mm) (also known as “Cape gauge”) came to be selected as the early standard gauge in Japan remains uncertain. It could be because 3’6″ was supposedly cheaper to build than the international standard “Stephenson gauge” of 4 ft 8 1⁄2 in (1,435 mm), or because the first British agent, whose contract was later cancelled, ordered iron sleepers made for the narrower gauge. It seems most likely, however, that Morel’s previous experience building Cape gauge railways in similar New Zealand terrain was a significant influence, and Cape gauge became the de facto standard.

As a further commentary on the 3′ 6″ gauge, readers might want to consult Japan Railway and Transport Review which carried an article about the 3′ 6″ gauge in 2002. [36]

Japan’s Shinkansen lines are all built to Standard Gauge, because trains are more stable, and can go faster, on wider track. Some other lines in Japan use 1,372 mm (4′ 6″), 762 mm (30″) gauge or 610 mm (24″) gauge. But the majority, over 83% in terms of distance, of Japan’s railways are built to Cape Gauge, 1,067 mm (3′ 6″). The name comes from its adoption in 1873 by the Cape Colony (later part of the Union of South Africa). But by then it had been around for nearly a century, originally for horse-drawn railways in England and Wales, and later steam railways around the world, including Australia, Canada and other locations. And, as of 1872, Japan, where it is known as KyOki (OM, literally “narrow path” or “narrow track”). But compared to Standard Gauge, it’s never been all that heavily used outside of Japan. [2]

Currently there are 5 track gauges in common use in Japan. The most common gauge is 1067mm/3′ 6″, which forms the bulk of the JR Group network and connecting private railways. The others, already referred to above, were very kindly listed by Mark Newton in response to a query from me on the website http://www.jnsforum.com. [3] His notes are in italics below. There is also an article in the archives of the magazine, Japan Railway & Transport Review from January 1997 which reflects on the activities of railway companies in the private sector [37]: 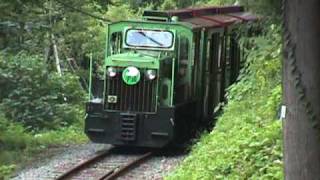 610mm – Tateyama Sabo railway (shown adjacent) in Toyama prefecture. [21] I think this would be the last non-museum/preserved line using 610mm gauge, which was once common for local and industrial railway operations, known as “keiben“, [22] throughout Japan. 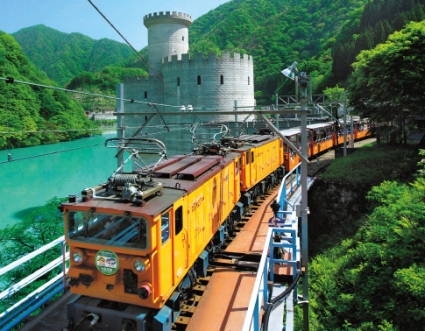 762mm – the three former Kintetsu lines [18] … and the Kurobe Gorge railway (shown adjacent). [19] This gauge was also once very commonly used by keibenlines throughout Japan, but in many cases the lines were converted to 1067mm gauge and electrified as traffic increased, such as Kintetsu’s Yunoyama line. The famous Kiso Forest Railway was 762mm gauge. [20]

1067mm – JR Hokkaido, JR East, JR Tokai, JR West, JR Shikoku, JR Kyushu, all JR Freight operations on these lines, and many private railways and tramway, big and small. The reasons for choosing 3’6″ gauge for the original Tokyo-Yokohama line in 1872 are not apparent these days, but that choice greatly influenced subsequent government and private railway construction. 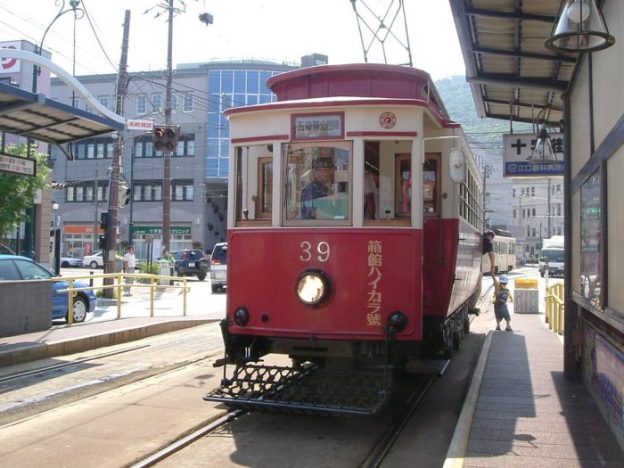 Hakodate Haikara-gō is a vintage 1372mm gauage tramcar first operated in the city in 1918 and now restored for use on tourist runs in the summer, (c) 湯の川. [34]

Historically there were a number of other gauges used. There were once a number of man-powered tramways, known as “jinsha kido”, some of which used 737mm gauge. Kaimaishi Iron Works and the Hankai Railway used 838mm. In northern Kyushu there were a number of local lines that used 914mm/3′ gauge. In total there have been 16 different track gauges used in Japan in the railway era. I’ve not gone into the various monorails and guideway lines there, as I’m not sure how you’d even measure their gauges! [3]

Edmund Morel (1840-1871) was a British civil engineer who was engaged in railway construction in many countries, including New Zealand, Australia, and Japan. He was the first foreign Engineer-in-Chief appointed by the Japanese government, for guiding and supervising railway construction.

A graduate of King’s College in London where he studied civil engineering, he was highly sought after to work with countries seeking to construct railroad systems, such as in New Zealand, Australia and North Borneo, which is now part of Malaysia.

Edmund Morel was clearly not one to shy away from a challenge. It was while he was working in North Borneo that he was asked to come to Japan by British envoy Sir Harry Parkes and help create Japan’s first railroad system. Edmund arrived in Japan on April 9, 1870. He had only 18 months to live. [13] On arriving at Yokohama, he at once proceeded to set out a line of railway between Tokei and Yokohama, 20 miles in length; the works on this, and on another length of 20 miles, between Kobe and Otaka, were commenced under him, but he did not live to see their completion. [14]

He assumed the role of Japan’s first chief engineer for railway and telegraph construction. His involvement in Japan was quite eclectic. Along with railway design he made proposals about the country’s education system and about engineering administration. It was as a result of his advice that Japan set up its Ministry of Public Works in December of 1870. It’s role was to find ways to bring in and utilize foreign technologies. [13]

The locomotives and rails for Morel’s railways were imported from England. Through discussions with senior government officials, Japan’s standard gauge of 1,067 mm (3′ 6″) was established. [15] Morel’s experiences in other countries predisposed him to the narrow gauge of 3′ 6″, in New Zealand contractors began laying track to the 5′ 3″ gauge from 1863 but all of it had been reduced to 3′ 6″ by 1870. Similarly, standard-gauge track laid in Indonesia from 1867 was gradually changed to 3′ 6″. (That gauge-change took time and was only completed during Japan’s wartime occupation.) [16]

As we have already noted, survey work for the 3′ 6″ line between Tokyo and Yokohama were begun in the spring of 1870 and the line was completed in May, 1872. The formal opening of the railway took place in the presence of the Emperor. “A general holiday,” says one account, “was declared for all government offices, and His Majesty the Emperor proceeded to the station dressed in ancient court costume, Naosbi, in a four-horse state carriage, accompanied by his suite in similar dress and wearing their swords.” [17] 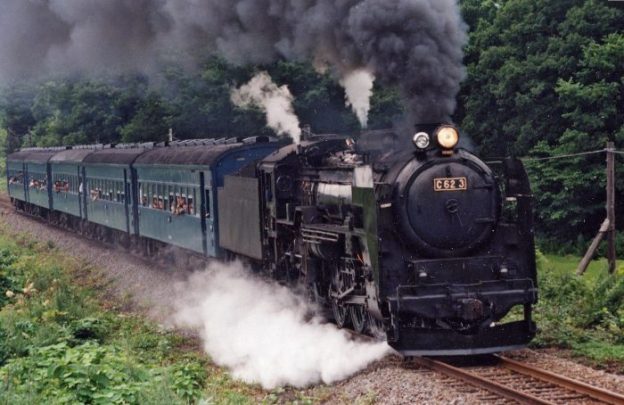 Other government sponsored lines were started after the opening of the first railroad. In December of 1873 work was begun on a 27-mile line between Kyoto and Osaka, and entwined in 1877. A short line between Osaka and Kobe was opened to traffic in 1874. Long range plans called for the laying of trunk lines, but owing to the shortage of funds and internal disturbances culminating in the Satsuma Rebellion, the government was unable to launch large scale railway projects in the early years. [17] 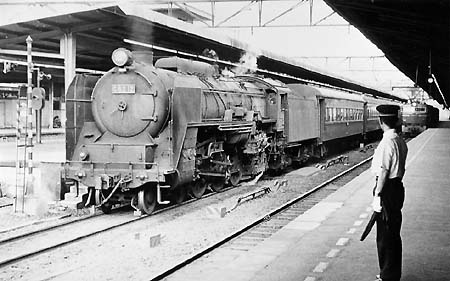 Although the government didn’t nationalize the railways until 1906, it took a strong central role in standardization, and apparently chose to continue with the gauge it had started with, causing most later railways to be built to that gauge. Some private railways chose other gauges, including standard gauge, and in particular a number of small regional railways used and still use 762 mm (30”) gauge. But most were built to Cape Gauge. [2]

In subsequent years, particularly from 1909 to 1920, the Japanese would try, repeatedly, to switch to standard gauge out of a desire for higher speed, heavier tonnage, or simply for ease of purchasing equipment overseas. Several of these attempts were put off by the government on military grounds, as the existence of an odd gauge made use of railway lines by a potential invader more difficult. By 1927, the nationalized Japanese Government Railways operated 12,864 km (7,993 mi) of track and it would have been very expensive to convert. And by then, the technology was entirely locally-made, and imports were no longer a concern. 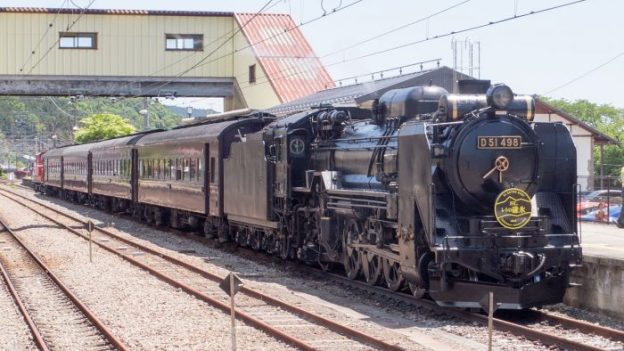 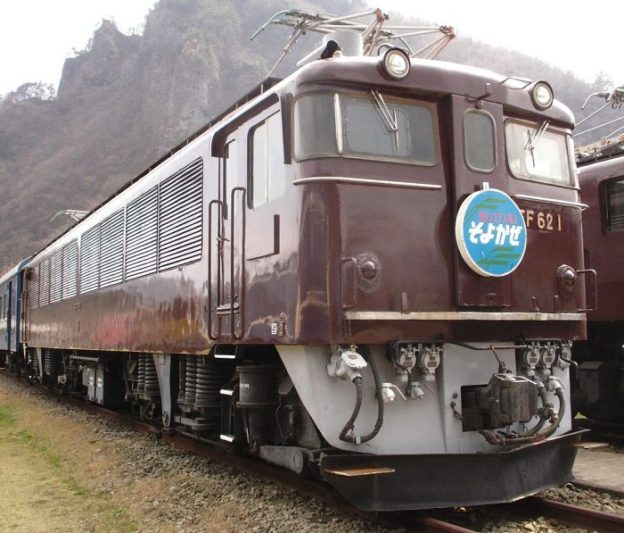 It wasn’t until the first high speed Shinkansen line was built in the 1960’s that Japan would finally get a large-scale standard gauge line. [2]