In Part 1 we covered much about the history of the line between Connel Ferry and Ballachulish. We start Part 2 with a few reminders of what was covered in Part 1 and provide some additional material from various sources before continuing our journey North along the branch.

Several sea lochs made road travel between Oban and Fort William difficult, and Argyll County Council had indicated that it would co-operate with the Callandar & Oban Railway (C&OR) if the railway were to build dual-use bridges; the C&OR was considering an ambitious railway from Oban to Inverness by way of Fort William. The C&OR decided to decline the idea, and to make the railway on its own, and to undertake the work it itself. The C&OR had difficulty in raising enough money for a survey of the proposed line, but undaunted, it presented a Parliamentary Bill for the line in September 1894, for the following year’s session. [1]

The C&OR made this move without consulting with its parent company, the Caledonian Railway (CR). When the CR heard of the plan, they announced that they would oppose the Bill in Parliament. The Bill was swiftly withdrawn. [1]

The C&OR converted their proposal into a branch line to Ballachulish from Connel Ferry. Ballachulish had a population of 1,800 at the time, and its industry was chiefly quarrying. The branch was authorised by Act of Parliament on 7 August 1896. [3] The C&OR line was to have a triangular junction a Connel Ferry, and to cross Loch Etive by Connel Bridge which was second in Britain only to the Forth Bridge in the length of the main span, and it was the largest single-span steel bridge in Britain. [5] The route approved north of the bridge was later changed substantially, a hotel had been built at Loch Creran to serve a proposed station there; the hotel was never opened as the railway as built did not go there. The capital was to be £210,000 of which the Caledonian Railway agreed to fund £15,000. [5]

The Route North from Benderloch

In Part 1 of this survey we travelled as far North as Benderloch. We saw at Benderloch a station very typical of the branch line with buildings (now long-gone) which matched those at other stations on the line.

Leaving Benderloch the railway and the A828 ran closely parallel to each other with the railway running closest to the loch shore. This continued until the railway approached the location of Barcaldine House.

The extract from the OS Map above shows the road turning inland at this point and crossing two rivers. The first is Death Abhainn, the second is Abhainn Teithil. The two rivers have over time created a small area of open land at the loch-side which the road avoided. The railway maintained a straighter route and was carried over each of the rivers on bridges.

Barcaldine Halt opened to passengers in 1914. It comprised a single platform on the east side of the line. A siding was installed at the same time, to the south of the platform. [9]

Incidentally, a search for Barcaldine on the internet produces some very interesting information about railways and tramways in Queensland, Australia. Something for another time!

I have recently received the next two images from Tony Jervis -the first is taken from a train passing through Barcaldine Halt. The second is a ticket for the journey from the Halt to Connel Ferry.

Tony comments: “The railway ticket was probably sold at Connel Ferry Station; if someone has list of station Audit numbers, 4777N against that station should confirm it. The train had just deposited the man and his bicycle.” [22]

Travelling on from Barcaldine, the A828 and the railway swapped places and the railway too a very slightly more inland trajectory and began to rise to a height which would allow it to cross the next loch – Loch Creran. The A828 was forced to take a detour to the East to follow the shore of the loch. The railway took the more direct route. 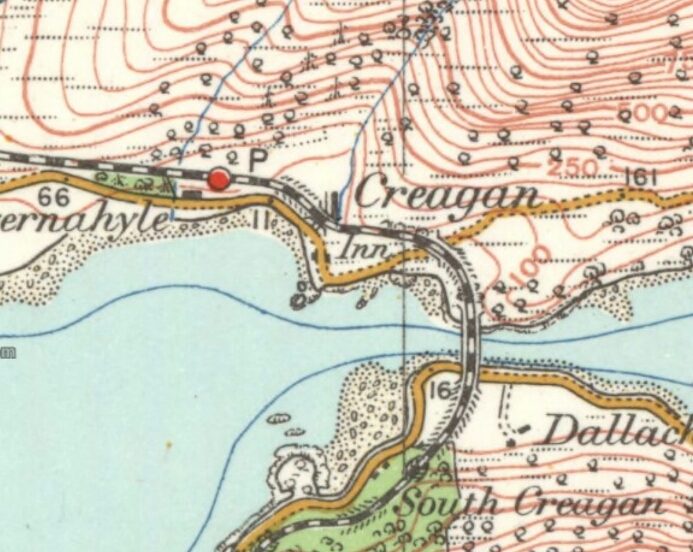 It crossed the loch at the narrowest point on a high level, Howe Truss Girder bridge. When the railway closed, the bridge remained as a pedestrian/cycle route until its foundations were used to divert the A828. 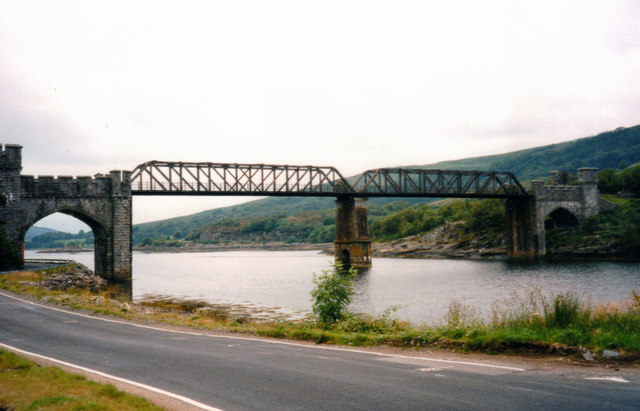 Creagan Bridge from the East, taken after closure of the railway line. [10]

The new bridge. The picture was taken in 2008 by Jack Russell from a very similar location to the one above. As can be seen, the new bridge made use of the foundations and lower piers of the previous railway structure. [11]

The station at Creagan when still in use. [8] 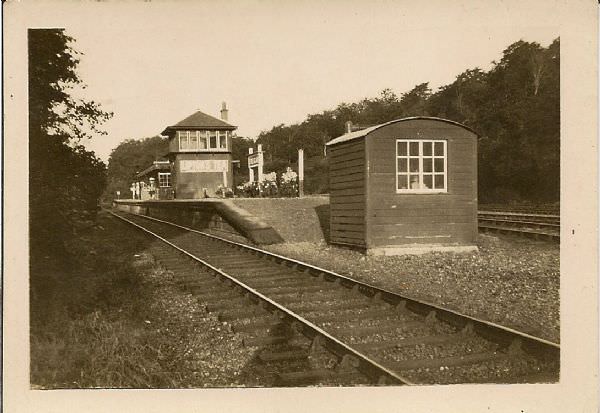 An earlier image of the station, taken when both lines were in use. [8]

The island platform building at Creagan in the 21st century. [12]

The line continued West from Creagan through the Strath of Appin to Appin Station, by which time the railway was beginning to turn to the North. 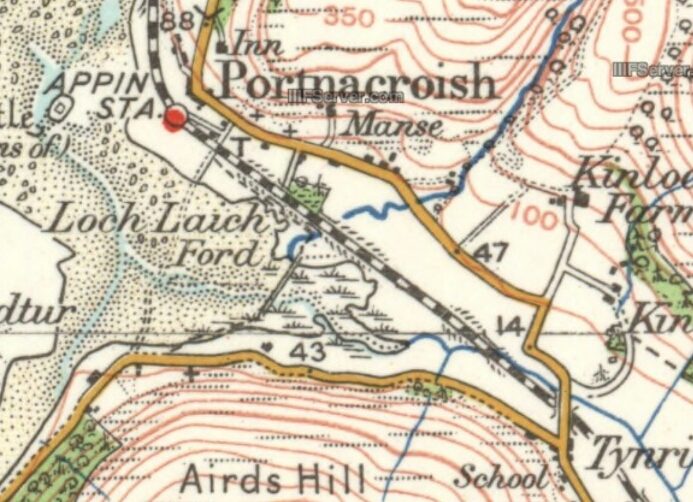 Appin Station was once again typical of the stations on the route. The station building was a substantial two story structure of the same design as elsewhere. The station was laid out with two platforms, one on either side of a crossing loop. There were sidings on both sides of the line. A camping coach was sited here for a number of years. 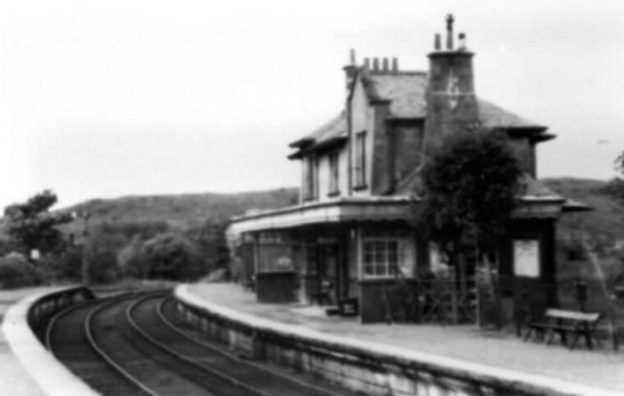 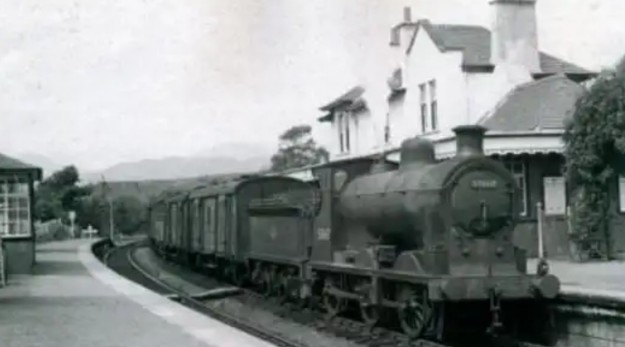 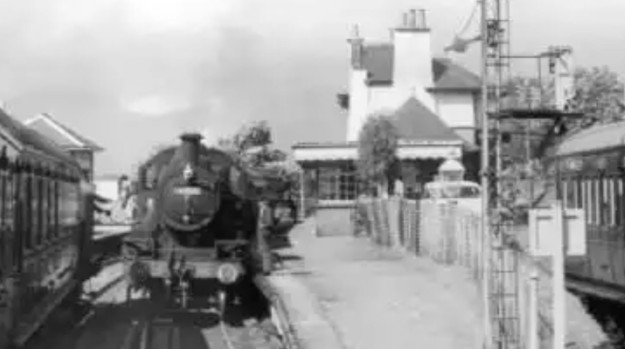 Two passenger trains pass at Appin. The camping coach is just visible on the right of the picture. [8] 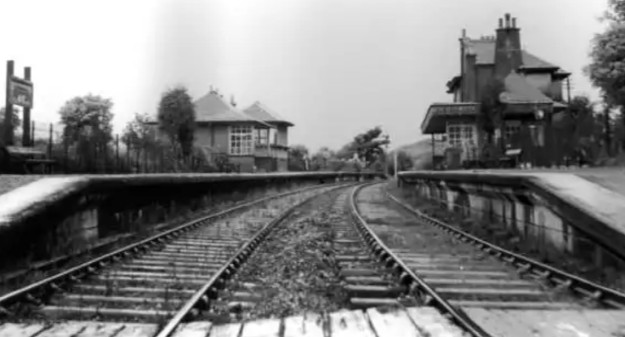 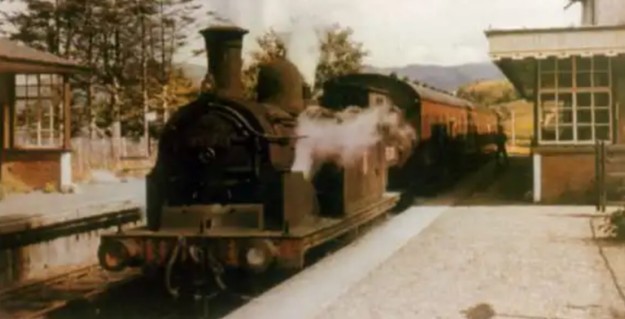 The service from Ballachulish in the later years of the line. [8]

Heading out of Appin Station towards Ballachulish, the line travels Northeast along the coastline. The A828 runs alongside the railway on the landward side all the way to Duror Station.

The next two images below show Duror Station while it was still in use for its intended purpose. The signal box can be seen beyond the main station building.

Duror Station after the closure of the loop. [16]
The station was laid out with two platforms, one on either side of a crossing loop. There was a siding to the north of the station, on the east side of the line. One platform was taken out of use on 8th April 1927 along with the crossing loop.

The station building at Duror is still standing and is a well-maintained private house. The pictures immediately below show the property taken from its access road. The station building remains almost intact, as do the platforms which lie within the garden of the private property. These are also shown below.

Another view of the station (c) Nigel Thompson. [17]

The station platforms in the 21st century. [16]
The line turned East for a short distance beyond Duror Station, and then turned to the Northeast. Its route is shown on the 1940s OS Map below and as a dismantled railway on the later OS Map below. On that map, Duror Station site is marked with a yellow flag. 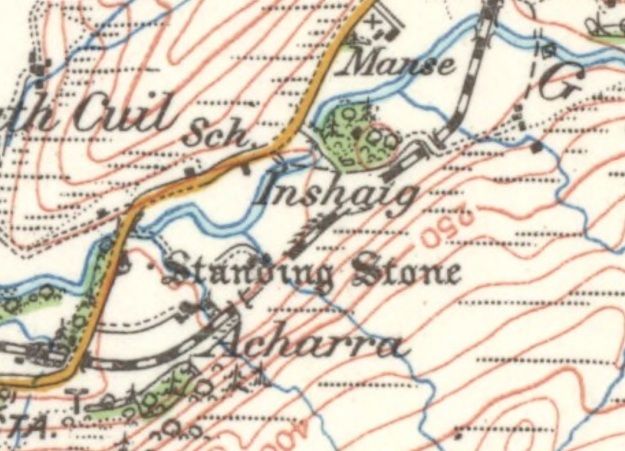 The route North-east from Duoro took trains through a narrow valley hidden away from Loch Linnhe which brought the line and the A828 down to Kentallen and Kentallen Bay. The village was at the head of the bay, its station some distance to the North-east. By the time the station was reached the railway was on the seaward side of the A828.

The station was laid out with two platforms, one on either side of a crossing loop. Alongside the station was a pier from which interconnecting steamers operated. The main station building was on the southbound platform and still stands in much extended form. There was a goods yard at the north end, on the east side of the line. There was a smaller shelter on the northbound platform. The pier survives, in cut back form.

To the south of the station site, and across the road, are railway cottages and the former water tank.

Following closure in 1966, the station buildings were enlarged and converted into a hotel and restaurant. 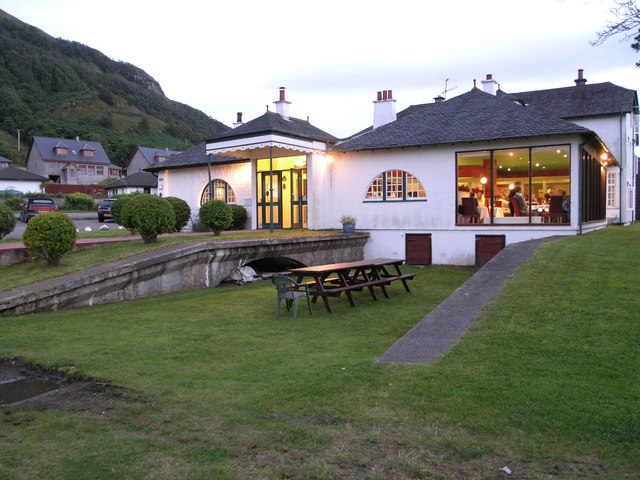 Holly Tree Hotel and Restaurant on the site of Kentallen Station in 2005. [18]

The Hotel from above on the hillside. [19] 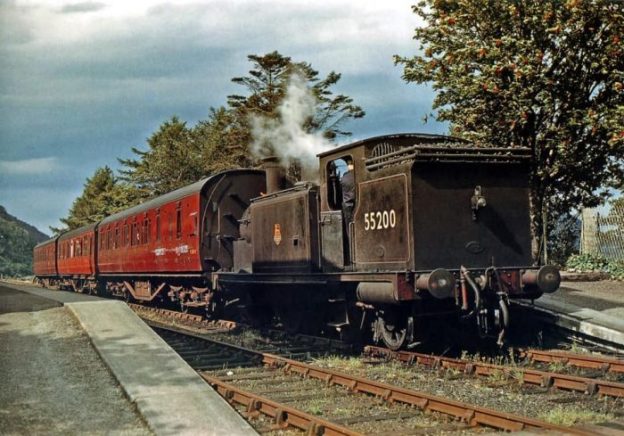 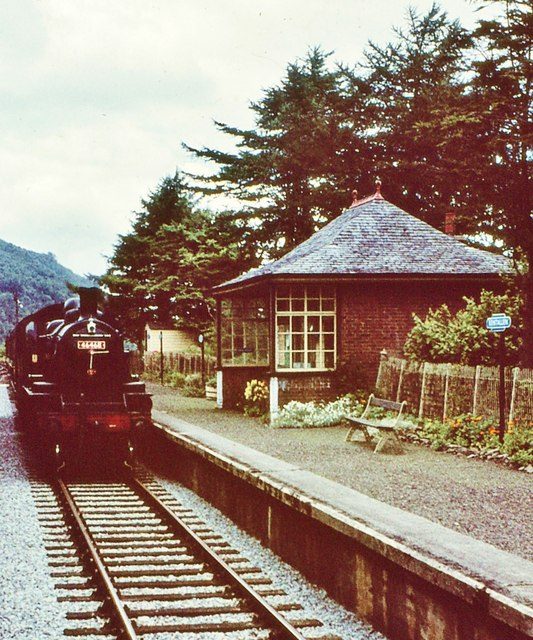 A steam train at Kentallen shortly before the line closed in 1966. [20] 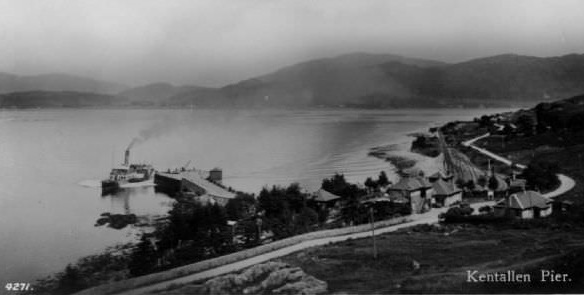 We have noted that train times and ferry times were designed to allow connections to be made between the station and the pier at Kentallen. The two pictures above show the pier in use by ferries. The ferry timetable is shown below:

The ferry made travel between Oban and Fort William manageable with a significant road journey. The stop at Kentallen allowed a combined train and ferry journey to be made.

To finish this post and before moving on towards Ballachulish we look at a few period images of Kentallen Station.

The station immediately after closure and before conversion to a hotel commenced. [13] 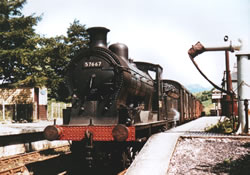 I had originally expect that there would be just one post relating to the Ballachulish line but the material has been mounting up and I have now (January 2018) discovered an article from November 1950 in “The Railway Magazine” which means that a third post is warranted. We finish this part of the journey at Kentallen and will commence again from here to complete the journey to Ballachulish in part three of the story of the line.