For this next post, we have travelled back on the line from Mouthoumet to Les Palais and are ready to explore more of the Tramways de l’Aude closer to the Mediterranean coast.

Les Palais station is in the middle of a triangle of tracks which allows trains to be directed between Fabrezan, the terminus at Mouthoumet and Thezan, This is not in an urban area, it is isolated and only a short distance from Saint-Laurent-de-la Cabrerisse, hence the legend of the postcard below. [1]

The station building at Les Palais in the very early 21st Century!

A schematic plan of the station. [2]

This is not the best quality of image but it shows the station at Les Palais. [5]

Continuing eastward towards Thezan and La Nouvelle, the train passes in front of the Pech Maurel farm, through the junction with the minor road to Coustouge, Aude, not to be confused with Coustouges, Pyrenees Orientales, which runs via Parazols along the GC106 (D106) [1]

The probable location of the tramway halt for Villerouge-la-Cremade.

Beyond Villerouge-la-Cremade, the trams would pootle along at a steady pace on the North side of the straight GC3 (D611) to the junction with the GC12 (D613) where the tramway and the main road turned to the Southeast.

The present D611 bears the name Avenue de la Gare as it enters Thezan-des-Corbieres. The station location was just to the Northwest of the town, roughly where the picture below is taken.

The location is clearly marked by the red circle on the map above. As will be noted later in this post, the location can be fixed exactly by the remaining station buildings. [3]

The four pictures above all show the main station building at Thezan. [4][5] Thezan was a junction station receiving trains from a number of different routes. It was one of the busier stations on the network. 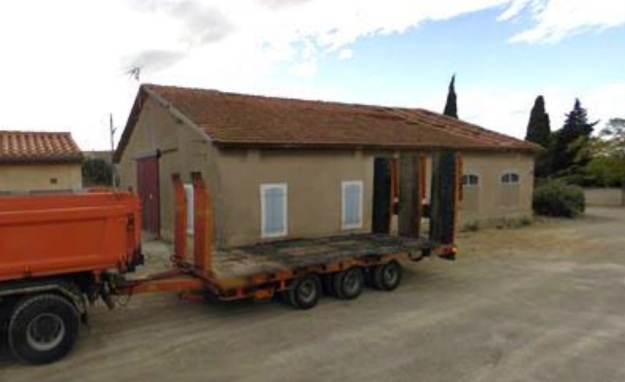 The two images immediately above show that the main station buildings are still in evidence in the early 21st century, in use as a road maintenance depot. [3]

The junction was to the South east of the town. Trains to Narbonne would bear off to the left.

Here a train approaches from Narbonne. The picture shows the telephone booth for the pointman. Given the heavy traffic of passengers and goods, the role of the pointman in Thézan was a position of high responsibility. With the arrival of a train from Narbonne, he had to make sure that no train was due on the common stretch Durban – Port La Nouvelle, then telephone to the train station of Thézan to obtain the authorization to switch the points. [5] There is an excellent page written in fench on the site www.thezandescorbieres.com which tells the story of the station. Auto translate in Chrome is a real boon! [5]

There was a small halt in the centre of Thezan at the beginning of Avenue de la Mer. The pictures below show the location early in the 20th and 21st centuries. [4] 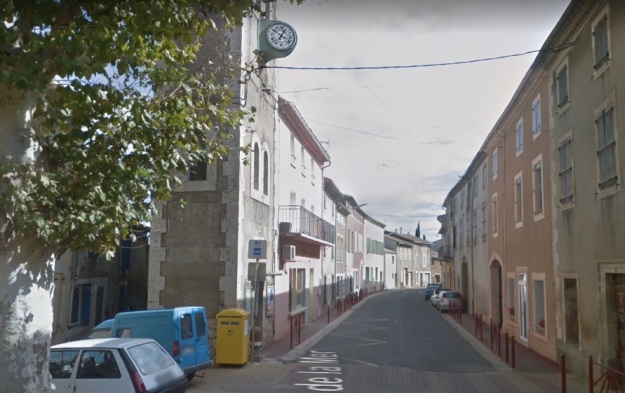 The tramway junction was to the Southeast of the town. This is the location in 2017. The large buildings on the right of the picture are the Wine Co-operative buildings. When the tramway was in use the D423 did not exist. The 1930s Michelin map show the tramway heading off across the fields towards Montseret and Saint-Andre as below.

We will return to the route towards Narbonne in a future post. For now, we continue Southeast towards Donos and Mont plaisir. As can be seen on the map above, the tramway follows the Northeastern shoulder of the GC3 (D611) all the way to Donos which is the location of a vinyard an little else in the 21st Century.

The tramway continues along the left-hand shoulder of the GC3 to Monplaisir. Over much of this length the tramway ran in a straight line and at a level grade. Monplaisir was another small hamlet and slipped quickly by as trams trundled on to the next junction/station at Ripaud.

The route to Ripaud was not initially demanding on trams, the terrain was flat and grades were shallow. The GC3 (D611) and the tramway followed the line of the Ruisseau du Ripaud towards the hills. As the hills began to close in around the river, road and tramway gradients still remained reasonable, as can be seen in the Google Streetview images below.

At one location the road curvature was a little tight for the tramway and the bend was eased. 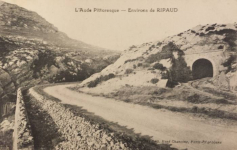 The location in the Google image above is shown at the time of the tramway in this image. The tramway tunnel has been removed and a cutting provided for the modern D611. [7]

he image below shows the location of Ripaud Station in 2017. Our route from Thezan comes in along the D611 from the left. The route from Durban and the South comes in from behind the camera and the route to Portel heads of into the distance on the right side of the picture The station itself was a little way up the route to Portel as can be seen in the sketch plan below. [8]

A series of postcard images of the station follow below. The first two show the inn in the picture above. [8]

The two tramway lines are evident in the image immediately above. [8] 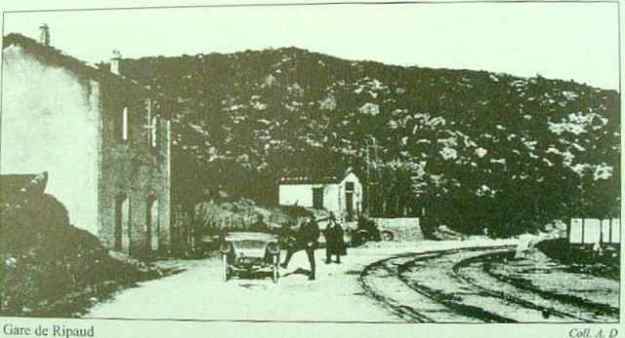 We are finishing this section of our journey at Ripaud because it is a junction station. We will return to it in the next post as we travel to it along the line from Durban. It is worthy of note that Ripaud is the subject of an excellent model of the Tramways de l ‘Aude made and operated by a team that take it around exhibitions in France, (Marie, Pascal and Christophe). [6]

Their website is really worth a visit – https://tramways-aude-miniature.webnode.fr. [6] They say: “The model of the Ripaud station is composed of two modules, 2 metres long and 60 cm deep. In order to respect the original layout, HOm scale was required. The left side, made by Christophe, represents the inn at Ripaud located in front of the River Berre, the way going left towards Tuchan and crossing a bridge and the one to the right to Lézignan. Pascal made the other module, the passenger building and the Ripaud depot overlook a large vineyard. Further on, towards Portel, a small house served as a dormitory for the staff. Marie created the backdrop of the two modules.” 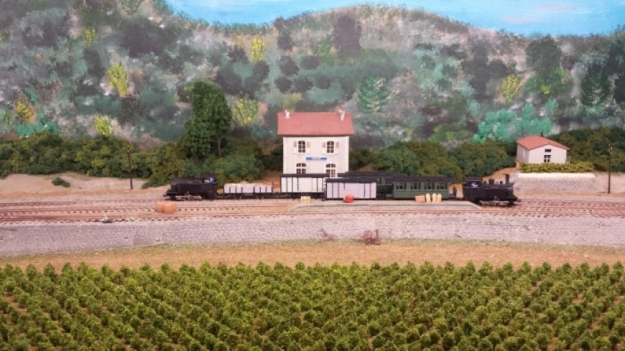