We continue our journey on the Tramways de l’Aude. This time we are travelling South of Lezignan. We start our journey with a dispute about the line of the tramway leaving Lezinan-Corbieres. The 1930s MIchelin Map is likely to the be the most reliable source. This suggests that the tramway terminated opposite the Gare du Midi. It shows two lines approaching the Station – one from Carcassonne and one from Narbonne, both being circuitous routes.

The Map, below, shows the routes. That running south for Lezignan is first shown running East to find a bridging point over the Chemin de Fer du Midi and then running West before heading off to the South.

An alternative route is suggested by Randonnees Ferroviaires [1] It shows the line running West along what was the Avenue de Narbonnes and then South down the D611. As I have already mentioned, I believe that the Michelin Map is the most reliable source.

Some work would be required to establish the actual route of the tramway! Whichever route is correct, the alignment has been lost under roads and various developments. My assessment of the most likely route follows approximately that shown on the 1930s Michelin Map. The exact location of the bridge under the standard-gauge line is not clear. Both red and green routes on the OpenStreetMap below are approximate.

A number of people have been in touch with me in the past few days to point to the IGN site called ‘Remonter le Temps’ and as a result I have been able to find 1942 aerial images of the East end of Lezignan. The green line above can be seen to be approximately correct on the image below. [10] The large loop below the Midi line is probably misplaced on the map above. The tramway on the aerial image appears to run North of the route of the road and much closer to the standard gauge sidings (as below). [10]

On the North side of the standard gauge line the rea and green lines are indicative only. I have found two plans in a copy of the Loco Revue magazine from 1961 which show the track layout at two locations on the green route north of the standard-gauge railway. The updated edition of the last post now has one of these maps which shows the approach from the north into the tramway station and the route out heading towards the East. [11][12]

The resolution of the second map, below, leaves something to be desired but it shows the tramway on the North side of the standard-gauge line almost at its most eastern extent. [13]

This aerial image shows the location of the sketch map above.

As a result of posting on a number of French language forums. I have been contacted by Pascal_pmidi on the LRPresse ForumForum who has provided two images showing the route of the tramway. In the first aerial image, the orange line shows the approximate line of the tramway after leaving Lezignan station. The second provides greater detail in the section before the line heads South away from the town. top left. [14]

In the searching the internet for information and pictures of the tramways I have encountered a number of photographs of the standard gauge railway. Before setting off on our journey southwards it is worth reviewing the photographs of the Gare du Midi and its goods yards.

Looking West along the Standard-gauge line. [3]

Looking West along the Standard-gauge line. [4]

Looking East along the Standard-gauge line. [3]

Looking East along the Standard-gauge line, this image shows the station to the left and the sidings to the South of the mainline in the middle and right of the image. [3] 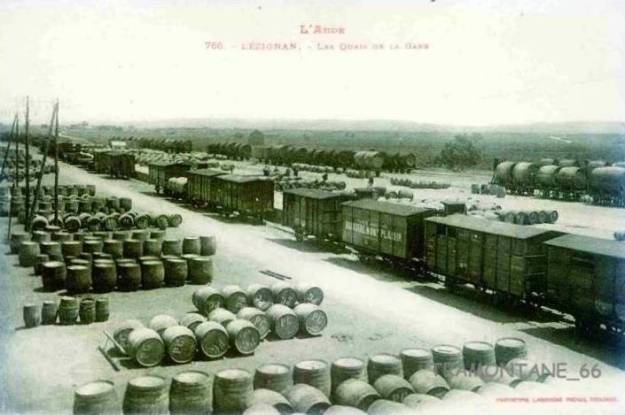 The Standard-gauge sidings make it abundantly clear that the main goods traffic on the Chemin de Fer du Midi in this area was wine! It seems that this is a view looking east with the unloading wharf just visible between wagons. [3] 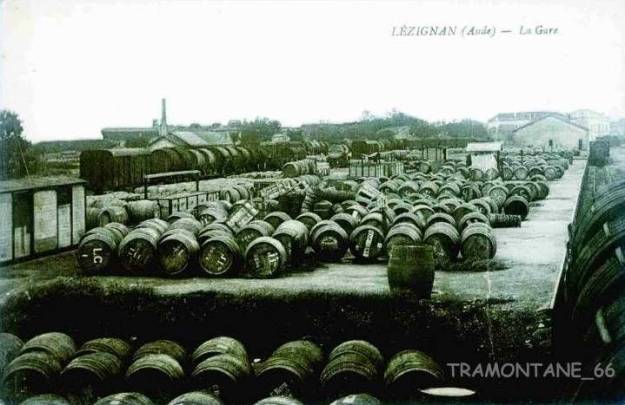 Looking West towards the station (in the top right corner of the image). [2]

The mixed traffic on the standard gauge line is highlighted in this image and the one below. [2] 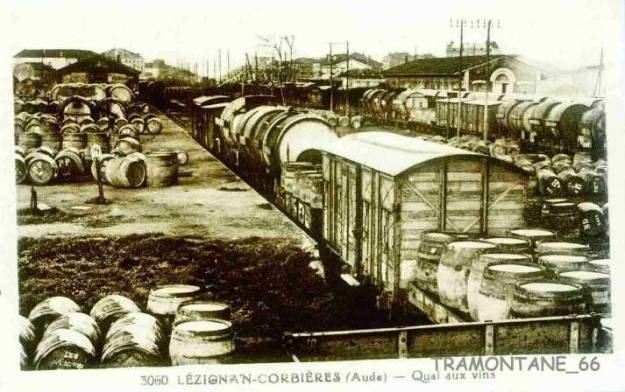 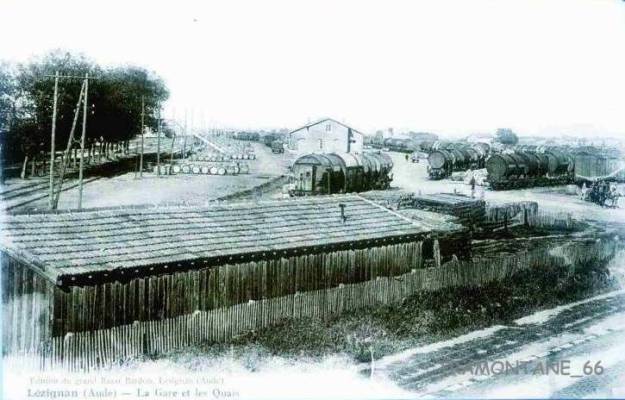 The South side of the mainline looking East. [2]

And finally we get on our train on the tramway. This train has just arrived on the tortuous Route from Carcassonne and the locomotive is about to run round its train to set off East before crossing the standard gauge line.

The road and tramway run in a straight line heading South-southeast. The plane trees mean that the scene feels quite cramped. [5] The image below is taken at a similar location in the 21st century, the road is now know as the Avenue de Corbieres.

The plane trees now only follow one shoulder of the road as doom had to be made for cars and lorries to pass. The tramway is long-gone!

When the D611 sweeps to the right to head for Fabrezan, the tramway route follows the modern D106 into Ferrals les Corbieres.

On modern maps Ferrals appears to be known as Le Faubourg. (Joseph Pestells on RMWeb points out that ‘Faubourg’ is a French term for suburb and that the village name of ‘Ferrels’ will appear elsewhere on the map.) The tramway route is schematically marked on the map below as a blue dotted line with the Station location at Ferrals circled in red.

The tramway turns right in the village to follow the line of the modern D111. It is highly likely that the house on the corner (on the right side of the junction) was built after the tramway was removed as the turn would have been too tight for the tramway. (My thanks to Joseph Pestell on RMWeb for this observation.) 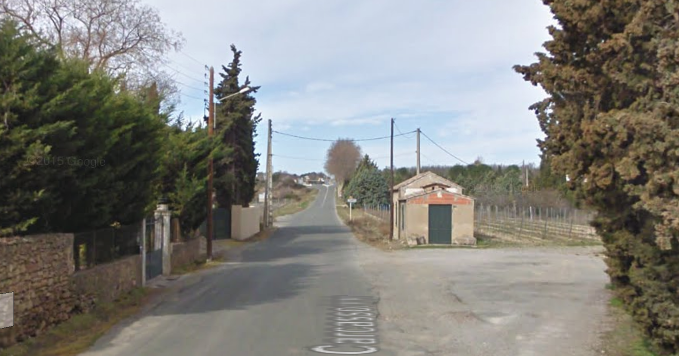 A few hundred metres to the West of the centre of the village we encounter what remains of the tramway station at Ferrals.

This postcard shows the view looking east from the Station into Ferrals. [5]

The view above looks West through the Station site and shows both the main-line and the sidings with the station building also in view. It appears that trains were permitted to pass at this location by taking the West bound train into the sidings. [5] The adjacent view looks East into Ferrals and shThe location of the Station shown in the early 21st Century.ows a significant mixed train. [5]

After the station at Ferrals trams headed westwards to the next major road junction with the IC12 (D611) and then travelled South-southwest to Fabrezan.

Before reaching Fabrezan the old tramway route leaves the line of the IC12 (the modern D611). It followed its own route through the fields. That route has now become a minor road.

On this map the tramway route is marked by blue dashes, the station location by a red circle. As can be seen there is a tramway junction in then village. We will follow the western route which heads for St. Pierre. [1]

North of Fabrezan, the tramway route bears off to the left of the modern D611. Both routes run through the vineyards of Corbieres.

The location of the Station shown in the early 21st century. 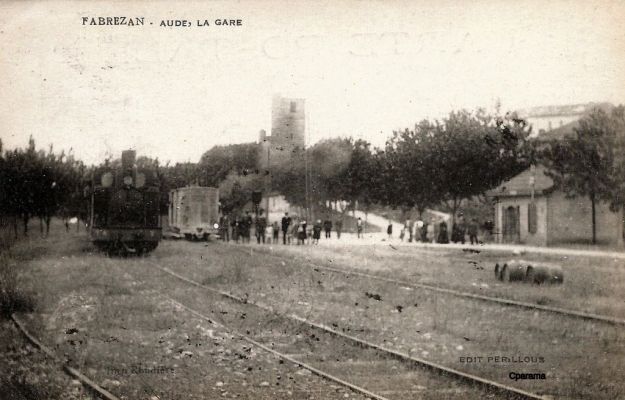 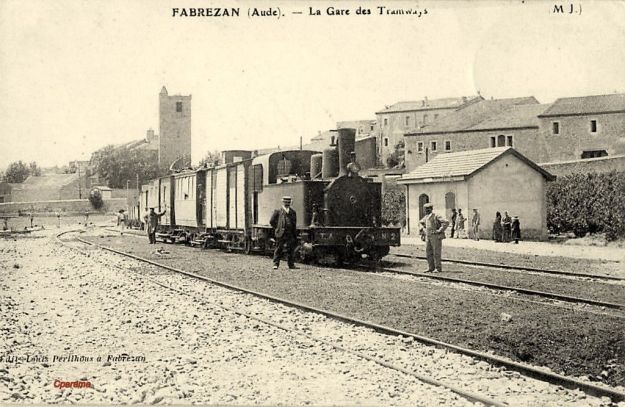 The station viewed from the opposite direction. [6]

In this early coloured image, the station site is shown to great effect. The gradient on the road to the centre of the village and the church can also be seen. This explains the tramway route, it followed the contours around the village which was built on a ridge and was at a higher level than the surrounding countryside. [1]

From Fabrezan Station, the tramway continued to flank the South-eastern side of the village and then joined GC122 (the modern D611). Along this length of road the two tramway routes divided with our chosen route heading first along Quai d’Orbieu, then Rue de l’Egalite before running along the shoulder of the IC12 (D212) towards Lagrasse and St. Pierre-des-Champs. The other route will be covered elsewhere. It follows the GC122 (D611) South to Les Palais and beyond.

The tramway route along the IC12 (D212) followed the northern shoulder. At the cross-roads between the IC12 and IC14 there was a Station for Camplong. In 2018, the Station site is now a picnic area.

Travelling westward the tramway and road crossed the River Orbieu on a large viaduct.

The view westward in the 21st century, from the vineyards South of the D212.

A view along the modern viaduct on the D212.

The next station on the Tramway was at Ribaute, the tramway continued to Ribaute on the North side of the IC12.

A view of the Station and village at Ribaute, taken from the South. [8]

The tramway followed the line of what is now the Avenue des Corbieres in Ribaute and this picture is taken looking along the line of the tramway from what was the station. The road to the right is still called Rue de la Gare. The station building shown in the monochrome image above still exists but it has been heavily modified! 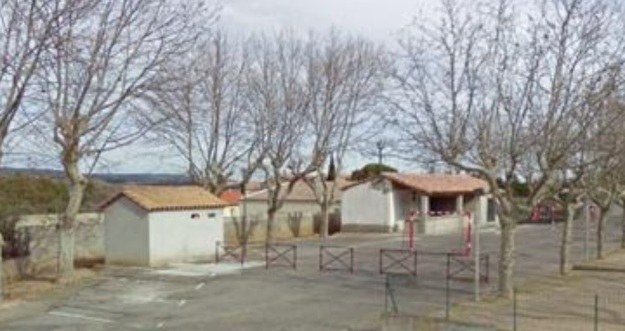 Two pictures of the old station building which has been modified and extended. [1]

Beyond Ribaute, the tramway remained on the right-hand side of the road travelling towards Lagrasse apart from one location which was around 1 kilometre West of Ribaute at a tight left-hand hairpin bend, where the tram needed to tunnel trough the rock to provide a suitable curvature for the track. 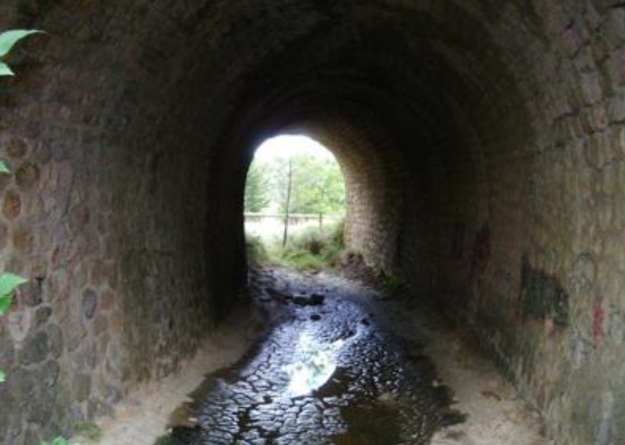 The tunnel route is shown on the map above and the tunnel is pictured in the direction we have been travelling – towards Lagrasse. [1]

The North Portal of the Tunnel. [1]

The South Portal of the Tunnel. [1]

Subsequently, a right-hand hairpin required that the tightness of the road curvature was lessened by the tramway finding a less sharp route around the bend.

The road and tramway eventually entered Lagrasse from the East along Route de Ribaute. 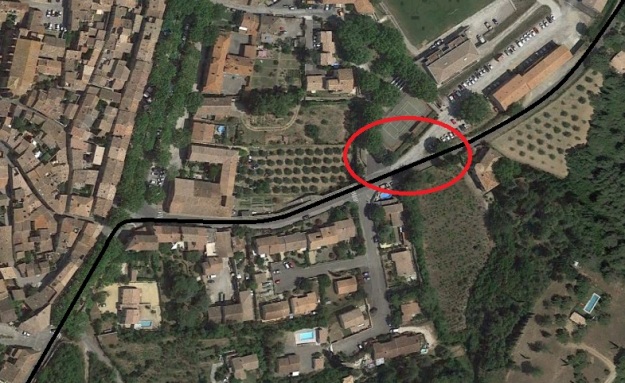 As far as I can ascertain the location of the tramway station in Lagrasse was in the area circled in red above. It is just before the Route de Ribaute meets the D3, Boulevard de la Promenade where the tramway turned south to head for St. Pierre. 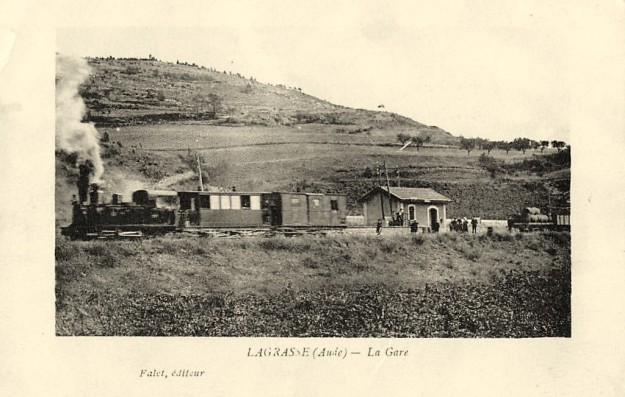 Two images on postcards which show the station at Lagrasse. [9]

The tramway followed the western shoulder of the GC3 (D3) out of Lagrasse and followed that road to its junction with the GC23 (D23). The line then followed the GC23 until it reached the side road which led to St. Pierre-des-Champs which today is number D212. Only a short distance along the D212 the tramway reached its terminus.

The D212 approaching the terminus station for St. Pierre-des-Champs. 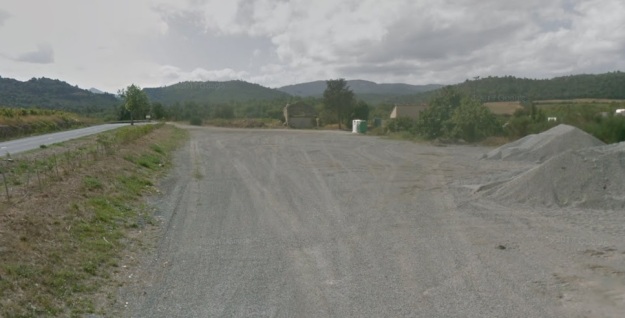 The site of the terminus. The remains of the station building can be seen in the distance. The station site was alongside the road (now the D212).

The terminus building at St. Pierre-des-Champs was over a kilometre from the village. All that remains of the building in the early 21st century can be seen in this picture which comes, as do the other images immediately above, from Google Streetview.

We complete this leg of our journey on Les Tramways de l’Aude at St. Pierre-des-Champs having been unable to find any images from the time of operation of the tramway.