Our journey along the Nice to Digne line recommences at Annot. We are halfway between Nice and Digne. My memory of travelling on the line is that Annot was touted as being an excellent destination when travelling from Nice, to allow access to mountain walking. A little research shows that to be the case. The map below is a copy of the hiking route map which includes an extensive range of walks. The “.pdf” from which it is taken can be accessed by following the link in the references at the bottom of this post. [1] The train we travelled on through Annot to Digne in 2001 was full of hikers who left the train at Annot.

It will also be evident from the above map that the line has left behind the department of Les Alpes Martimes and is now in the Alpes de Haute-Provence. The Tramway from Pont de Gueydan northwards (https://rogerfarnworth.wordpress.com/2018/07/25/tam-tramway-from…r-de-provence-69) followed the approximate boundary between the two departments.

Annot is in the valley of La Vaire. Its station is on the valley side to the southeast of the town centre. [2]

Annot is located on the edge of Mercantour National Park, it was founded on a small hill and surrounded by wooded mountains, the village which dates from the 11th century, has little by little spread along the banks of La Vaïre. The old village is built in sandstone. Immense boulders of this rock (sometimes more than 100 metres high) can be seen at close quarters by following the “Chambre du Roi” waymarked circuit. Some of these rocks can be seen in the background of the image below. 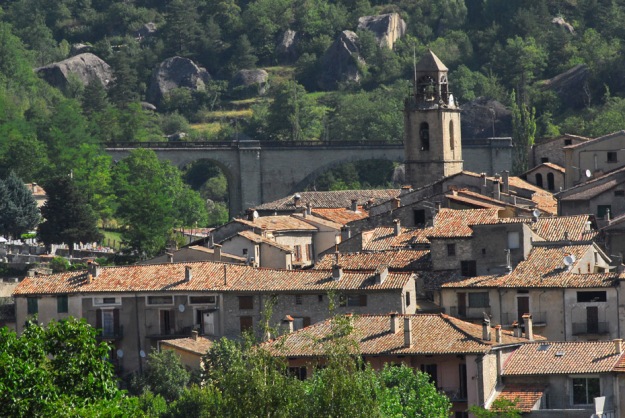 The viaduct seen from beyond the village. [3]

A view of Annot from further to the southwest. [4] 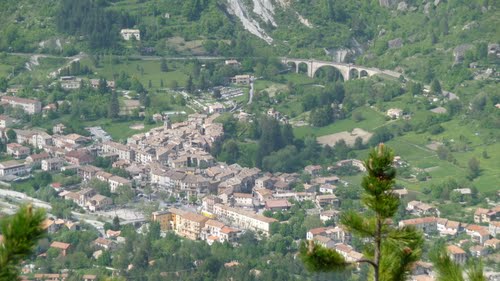 Annot from above. the railway can be seen crossing the viaduct behind the town. Annot railway station is just off picture to the right. [5]

OpenStreetMap provides an excellent cartographic image of the town, station and viaduct. The railway can be picked out easily as a black line to the east and north of the town. [6]

So, we return to the railway station and prepare to leave travelling North, initially, towards Digne-les-Bains.

The pictures immediately below are taken at the station. The first shows the most modern trains on the line and the carriages of the Steam service. [7]

An older railcar (autorail) and the steam service waiting at Annot Station. [8]

A modern train approaches the throat of Annot station from Digne while the “Portuguese” Steam Locomotive waits in the station. [9] 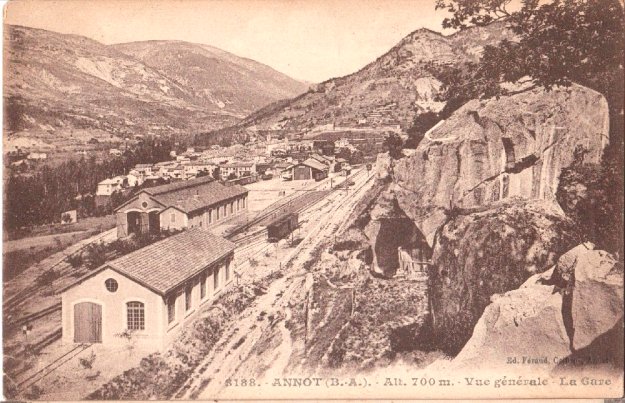 The three images above show Annot station in its very early days. [16]

Our train sets off from Annot. The next few images give a driver’s eye views along the line as we leave the station. [10] 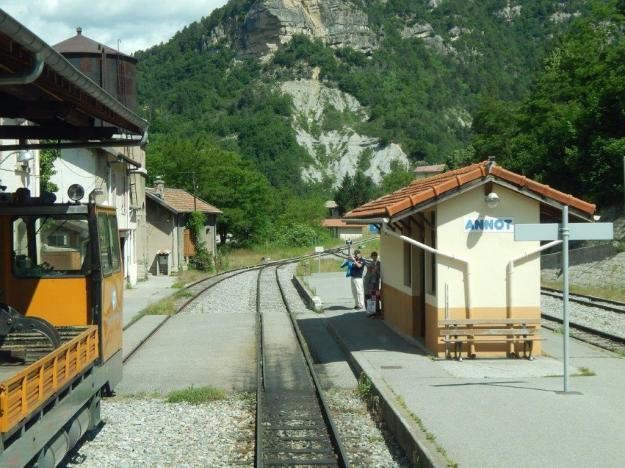 About 700 metres beyond the Station the line crossed the Viaduc de la Beite, across the valley of La Beite. We have already seen the viaduct in the photographs of the town of Annot above. But it is an elegant structure, so more photographs seem appropriate. 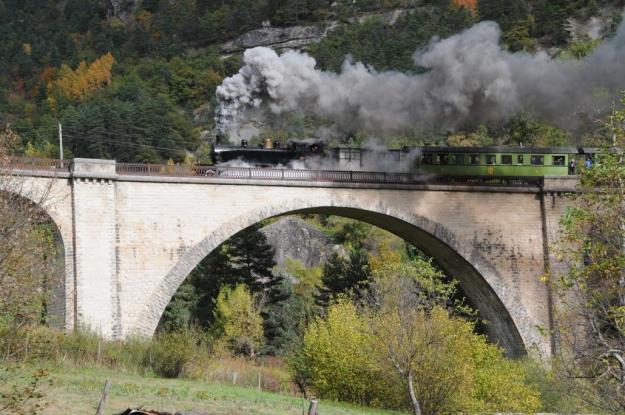 This is Le Train des Châtaignes. It is the last day of the 2013 season (Saturday 2nd November) for the “Train des Pignes” It circulated between Puget-Théniers and Le Fugeret for the Fête de la Châtaigne at Le Fugeret, (c) Jose Banuado. [11] 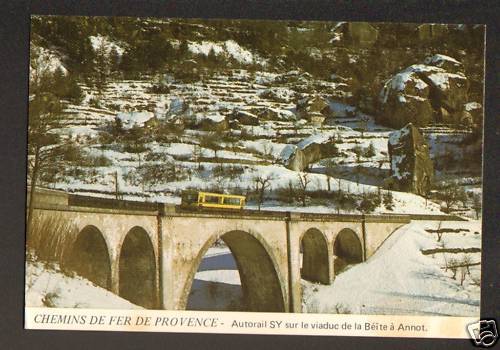 A freight train has just crossed the viaduct heading for Annot, circa 1956. [16]

As trains travel over the Viaduc de la Beite, they turn back to towards the D908 and for a short distance travel east-west before turning to the northwest once again. As the road and railway continue in a northwesterly direction their paths drift closer together so that around 4 kilometres northwest of Annot they are running side by side.as they approach l’Arret des Lunieres. [10] 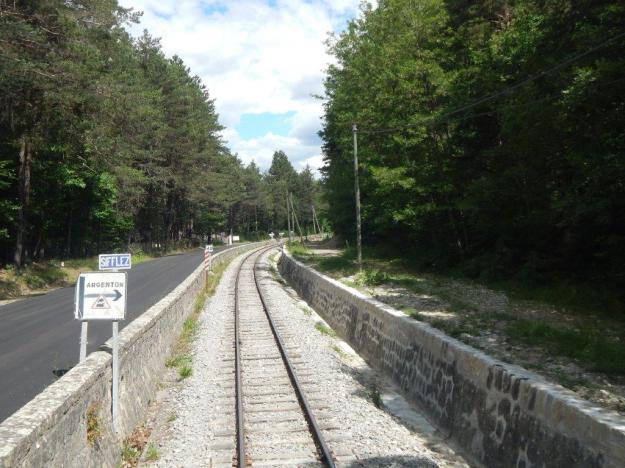 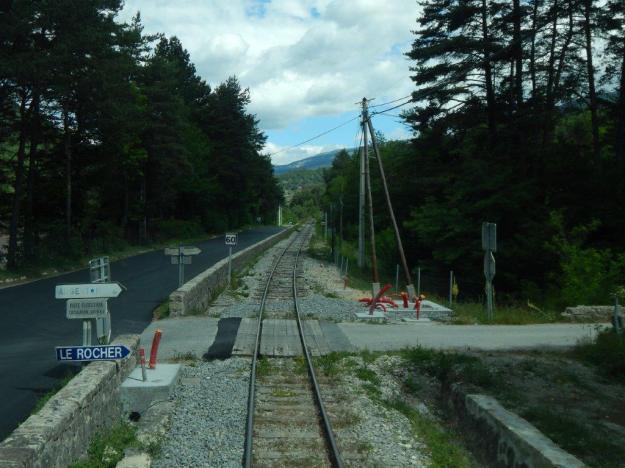 North of the Halt the road drifts down toward the valley floor while the railway follows the contours. As the disparity in levels increased the old road swung underneath the railway at Ravin de Fouent Bouisse and back again under the viaduct having crossed the stream. The clearances between road and rail were not adequate fro modern vehicles and the road had to be diverted to stay on the southwest side of the railway. 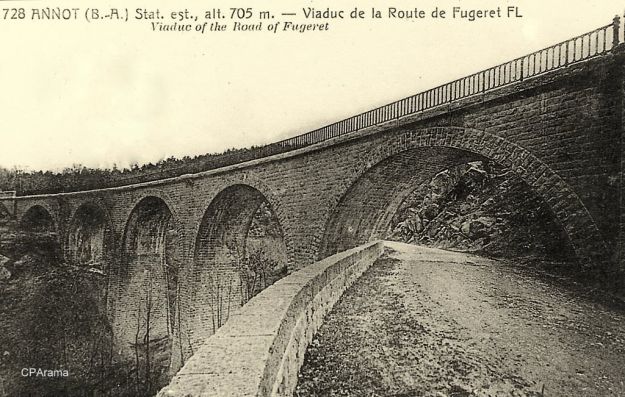 The viaduct before any consideration of diversion of the road. [14]

In no more than a couple of hundred metres, the road had dropped sufficiently to pass under the railway at a second viaduct and then follow it on its northeast side. before switching back to the southwest side again. The viaduct was named, “Viaduc de Fontbouisse.”

Looking back towards Annot.

From the same position, looking forward towards Le Fugeret.

An early picture of the Viaduct. [14]

With the road back on the southwest side of the railway, the lines are supported a significant height above the road by a substantial retaining wall.

As the road and railway approach the village of Le Fugeret, they separate and Google Streetview becomes less effective in showing the route of the railway! Before entering the station at Le Fugeret it is worth looking at the satellite image below to get a feel for the railway in the immediate vicinity of the village. As can be seen in the image, the railway station is some distance from the old village. The station is just visible at the bottom of the picture, with the old village to the middle left. The railway line uses this location to loop back on itself to gain height before continuing once again in a northwesterly direction. It’s track can be picked out on the satellite image, and can more easily be seen on the openstreetmap extract below it.

Le Fugeret Station was set on an approximately north-south alignment to the southeast of the village to permit the line to gain sufficient height to continue on its journey up the valley of La Vaïre. 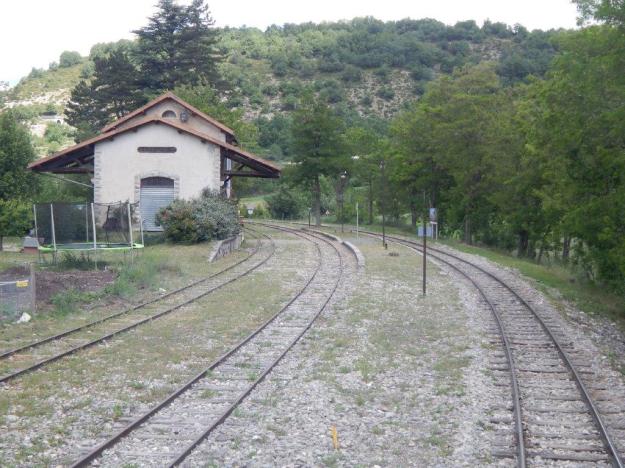 The station buildings from the south. [10] 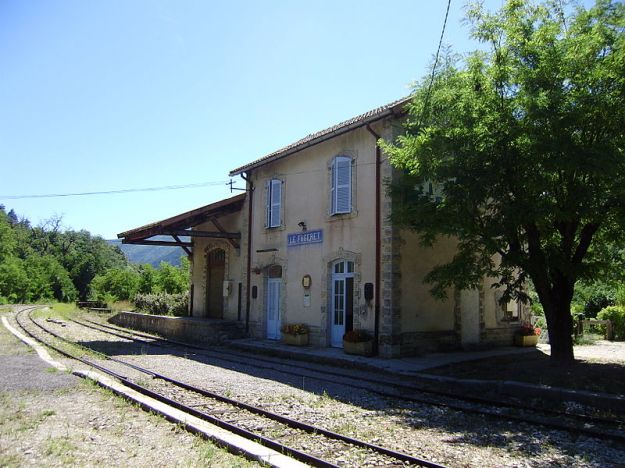 The northern end of the platforms at Le Fugeret Railway Station. [10]

The northern station throat with the old village of Le Fugeret visible to the left of the track ahead. [10]

A train leaves Le Fugeret station for Digne and passes the old village. The small bridge under the train in the image is shown below in a telephoto view from the main road in the village. [15] 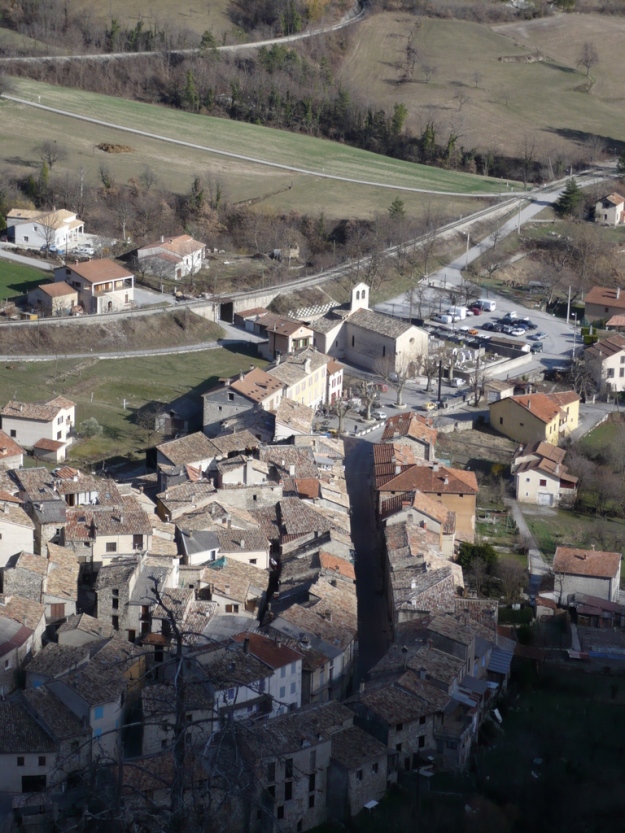 The line leaves the station and heads towards the loop. The station is off the picture to the right, the village is in the foreground, the accommodation bridge is visible to the left of the church. The railway can be seen again right at the top of the photograph having turned through 180° close to the village, as seen below. [17]

The railway turns round to the northeast with the old village behind. [18]

The village is off the photo to the left. The railway continues to turn through 180° in the foreground, and can be picked out again, after turning through another loop, at the top of the picture. To the bottom right of this picture and hidden behind the trees, the line passes through a short tunnel. [17]

A 194 metre tunnel allows the 180° turn to negotiate the topography of the village. This tunnel is called “Tunnel Notre Dame.” It is shown below marked with red, blue and green dots. [19] 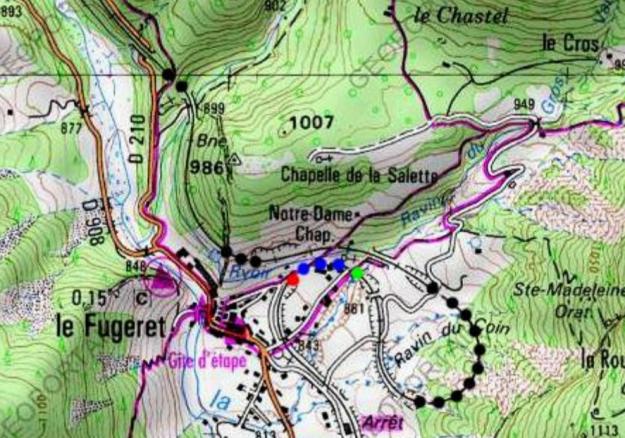 The southwest portal of the Tunnel Notre Dame. [10]

The southeast portal of the Tunnel Notre Dame and the small bridge over the grandly named Ravin du Gros Vallon. [19]

An accommodation bridge provides access between fields either side of the line. There are a number of driver’s eye views in this post which have been taken from the website of Reinhard Douté (www.rd-rail.fr) [10]

The line completes its first 180° turn after passing under the accommodation bridge above. It then crosses the Ravin du Coin, on an embankment, before entering a lengthy curved tunnel which accommodates the next 180° turn – The Tunnel du Fugeret. The tunnel is marked by red, blue and green dots below and is over 500 metres long. [20] 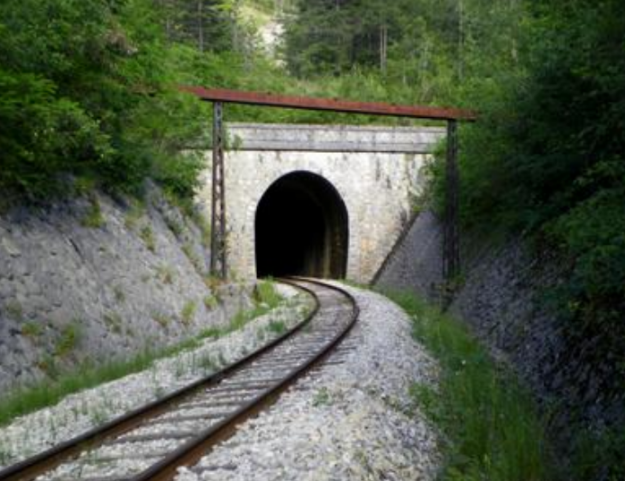 The southern portal of the Tunnel du Fugeret. [20]

The northern portal of the Tunnel du Fugeret. [20]

The line then curves gently across the north of the village to the Tunnel de la Barre which can be picked out on the left of the satellite image immediately below. On the way, it crosses the Ravin du Gros Vallon again. The second image below shows the viaduct which spans the ravine.The third image below shows Le Fugeret with the line running high on the hillside behind it and the viaduct over the Ravin du Gros Vallon can bee seen on the right of the picture. 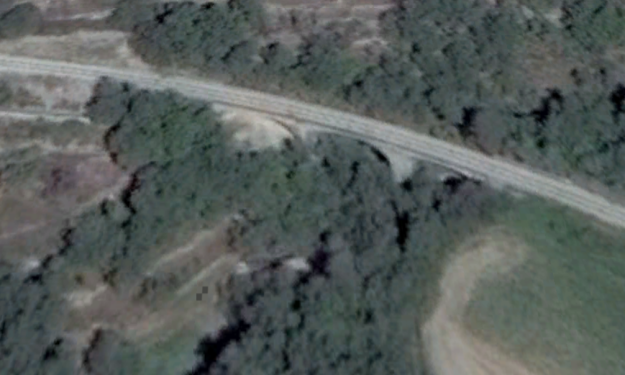 Le Fugeret from the southwest. [21]

The Tunnel de la Barre is marked on the map below by red, blue and green dots and is just 75 metres long its portals are shown below. [22] 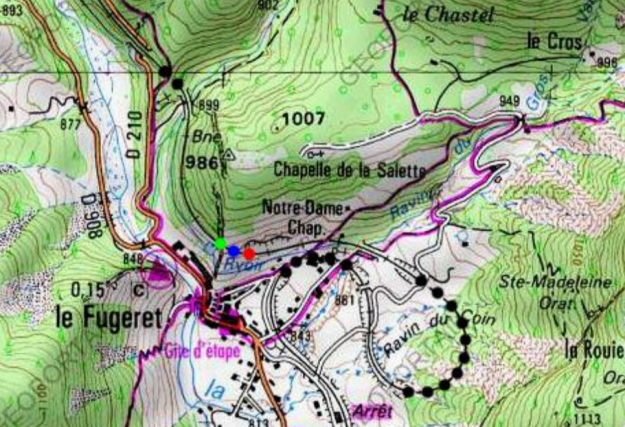 The east portal of the Tunnel de la Barre. [22] 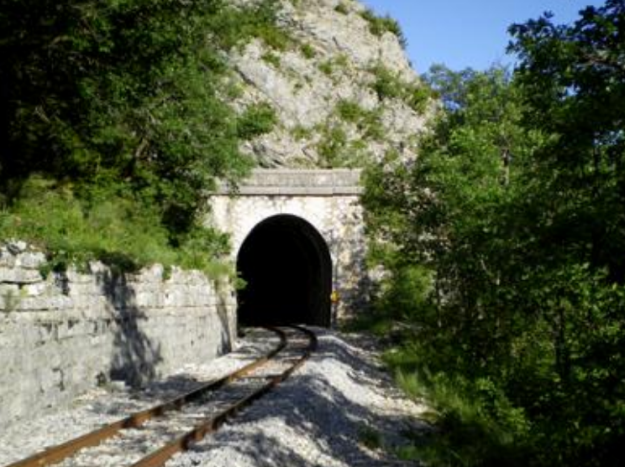 The west portal of the Tunnel de la Barre. [22]

After leaving the tunnel the line continues to curve round to the north and then crosses a viaduct and passes through another short tunnel. 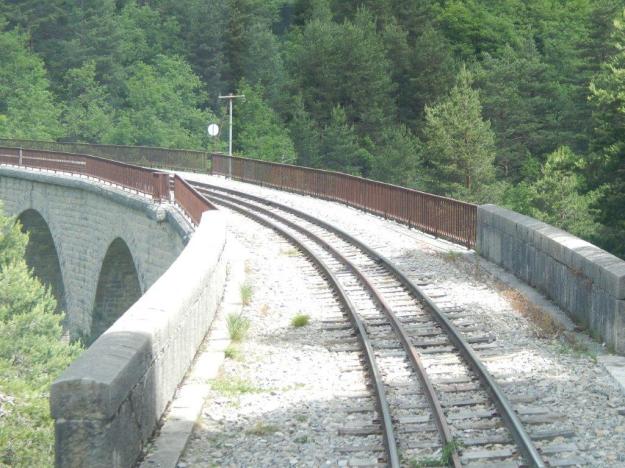 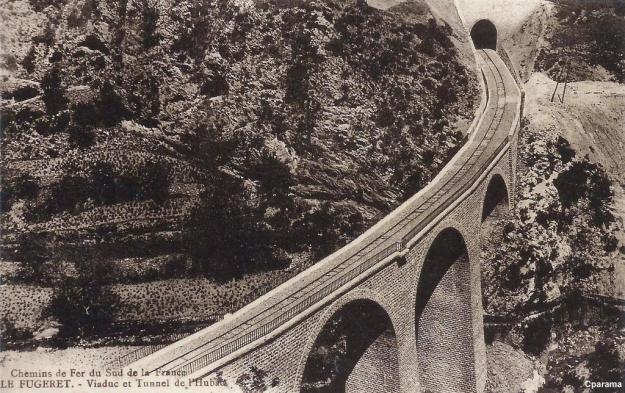 The viaduct and tunnel of l’Hubac. The Ravine is known as the “Ravin de l’Ubac.” [14]

The viaduct is a substantial structure, the tunnel is short, only 35 metres in length. The south east portal is shown in the first image below and the northwest portal can be seen in the second image below. [23] 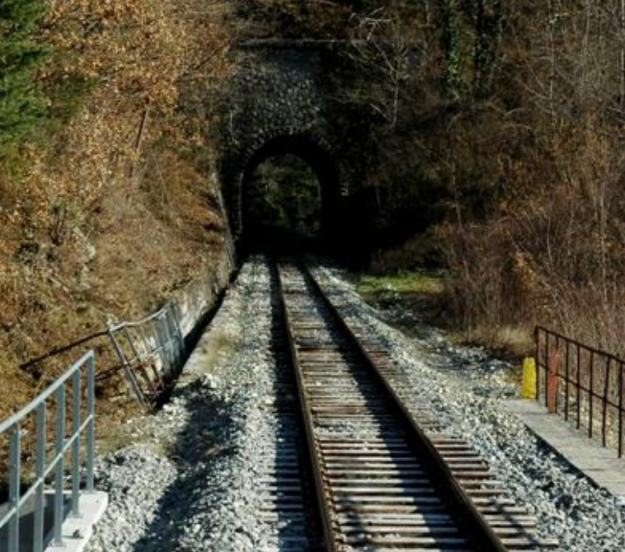 A short distance beyond the Tunnel de l’Hubac, the line crosses the D210 on what is now (2018) a very new, short-span structure. The road then climbs steeply, first to run, for a very short distance, at the same elevation as the track, and then to rise high above it.

In the two images immediately above, the line continues alongside La Vaire, but high above it to the East, towards the next station at Méailles. Along the way it crosses a series of viaducts and requires a number of retaining walls. [10]

High retaining walls can be seen from the D908 on the West side of the valley of La Vaire. Some, as above, hold the hillside above the railway. Some, like immediately below, support the railway. And in places the railway leaves the hillside to run on its own retained embankments and crosses ravines by means of bridges, as in the second image below.

Looking forward up the line towards the station at Meailles from the D908 across the valley.

A similar view from a few hundred metes further north along the D908. [24]

Two images (above) of the Meailles Viaduc Sud, both taken from Google Streetview.

The Village of Meailles sits high above the valley floor to the East of La Vaire. The railway station sits midway between the village and the river, as shown on the map below (OpenStreetMap). [25]

The station is overlooked by a massive retaining wall. [28] In the image below from 2016 we can see the wall under repair. [10] It is obvious in this image that now-a-days the station is little more than a Halt. But this is where we are going to stop and take time out. Meailles is that end of this stage of our journey and we finish this post with some pictures of the station. 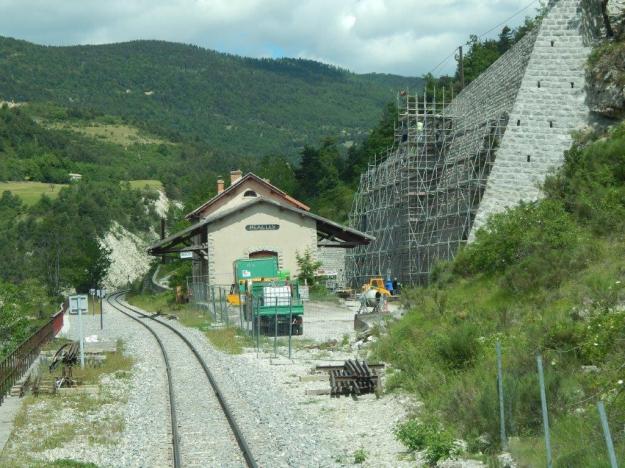 The station sits on a platform built into the valley side. [26]

There was once a single siding which branched off the mainline to the south of the station and clung to the retaining wall behind the station buildings. [27]

The civil engineering works associated with this small station are very significant. [29]

The station is just visible to the bottom left in this postcard view of the village of Meailles. [30]