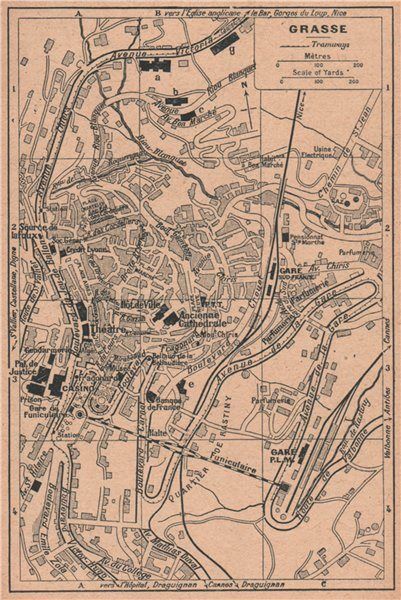 We have spent quite a bit of time in and around Grasse. Most recently in these posts we have travelled down to the coast and if you chose to watch the videos at the end of post 24 in this series of blogs you really will have enjoyed the cab-ride to Cannes.

We start the next stage of the journey along the Chemin de Fer du Sud from Grasse Gare du Sud which is in the centre of the map of Grasse from 1930 above. It will be some time before we get to Meyrargues but here is the ticket we need for the journey. Actually for the return leg of the journey, but it was the best I could find!

Leaving the station, the line immediately went into a short tunnel under what was then Avenue de la Gare (and which meandered down from Grasse town centre to the PLM station) and is now called Avenue Pierre Semard. 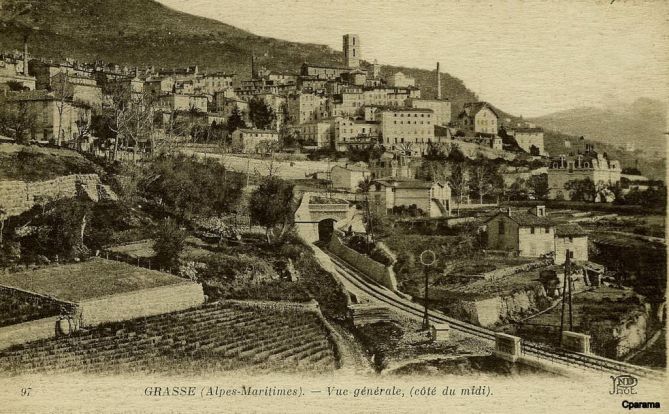 The route of the line lays underneath the modern Avenue de Provence. There is a short section in the city where the old road is a little higher than the rout of the line and carried by arches alongside what would have been the tracks of the railway.

The railway then travelled under the Avenue Sidi Brahim and over Avenue Henri Dunant onto what is now Avenue Frédéric Mistral.

Avenue Frédéric Mistral follows the old line through the Southwestern suburbs of Grasse and eventually becomes Boulevard Louis Icard as the old line turned in a Northwestely direction under an old accommodation bridge.

Soon after this the high retaining walls alongside the line gave way to a Viaduct – the Viaduct of the Pouiraque and then another small bridge which both carried the line over the meandering Canal de Siagne.

The only picture I have been able to find of this viaduct is the adjacent one, which shows the central pier after removal of

the metal truss girders. Today, the Boulevard Louis Icard terminates short of the Viaduct. We have to divert onto the Route de Draguignan (D2562) to travel round the head of the valley.

We find the route again, now under the Chemin de Peymeinade. In the small picture on the right trains would have come off the Viaduc de les Ribes just to the right of the chevron sign and wheely-bin!

242T66 on Passions Metrique (http://www.passion-metrique.net/forums) comments that Les Ribes viaduct was not damaged during the war but was dismantled after the line had been closed. The scrap merchant who was recovering the rails thought it would be better to retain the viaduct for further use and offered to sell it to the town of Grasse at the same scrap value he had bought it. But the mayor was not interested. So the metal girders were dismantled and the potential right of way severed for ever….

Another accommodation bridge was soon encountered. This time a stone arch bridge with the

line in a deep retaining wall lined cutting. This was quickly followed by another stone arch bridge (below), this time carrying what is now the Chemin des Aubépines. 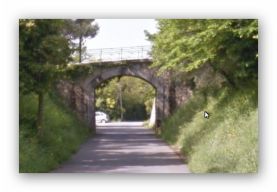 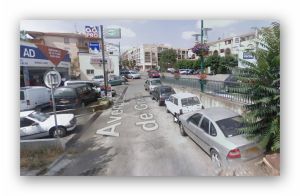 The line follows Chemin de Peymeinade and then Avenue de l’Amiral de Grasse towards Peymeinade. That road meets the D2562 at the point shown on the adjacent picture. The route of the railway In Peymeinade has all but been obliterated by development. In this picture the route heads off under the building in the centre middle distance.

In the plan view, the line arrives in Peymeinade at the bottom left. The station was towards the top of picture just to the right of centre. The only remaining vestige of the station is now the Office de Tourisme for the town.

The station house is the Tourism Office. 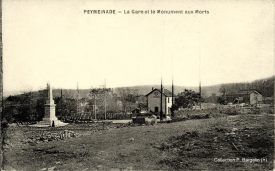 In the next post we will head on towards Draguignan.