New Fancy was a colliery on the Forest of Dean Coalfield near Parkend in Gloucestershire, England. After the colliery closed its spoil heap was landscaped. The site has a picnic area, and viewing site from where goshawks can be seen. It is linked to the Forest of Dean Family Cycle Trail. The top of the old coal mine spoil heap has been converted into a viewing site for birdwatchers, and gives panoramas over an extensive forested area. It is best known for viewing raptors, especially goshawks, best seen from late morning onwards in February and March. 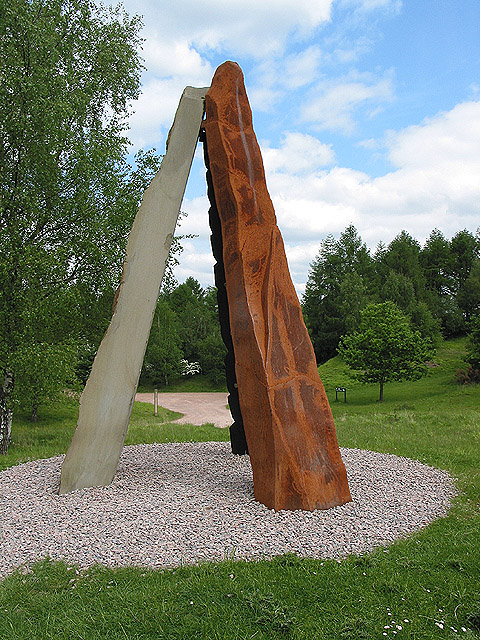 There are now two significant sculptures at the site. The first is the Roll of Honour sculpture which was commissioned by the Forest of Dean Local History Society to honour those who worked and were killed or injured in the mines and quarries of the Forest of Dean. It was buil by Graham Tyler and John Wakefield and was unveiled in 2005. It consists of three elements – stone, iron (represented by rusted steel), and coal (represented by carved and blackened local oak) – and stands around 11 feet (3.4 m) high. Stainless steel discs set into the sculpture represent the tokens carried by miners to determine who was below ground in the event of accidents.
The second is the Forest of Dean Geomap, a 900 square feet (84 m2) sculpture of the 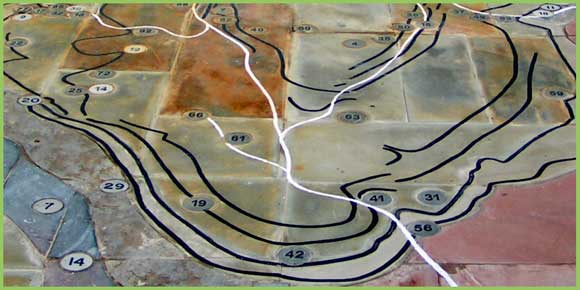 geology and mines of the area, was unveiled at the New Fancy picnic site in May 2008. It was commissioned by the local history society, who received a grant from DEFRA’s Aggregates Levy Sustainability Fund, and was constructed by sculptor David Yeates of Mitcheldean before being assembled on site. The rock strata depicted are built from samples of the rock they represent. Metal discs represent the locations of the main iron and coal mines and quarries, with black lines to represent coal seams and white lines for railway routes. It is flat and polished, but not shiny, and is intended to be walked on.
The Colliery 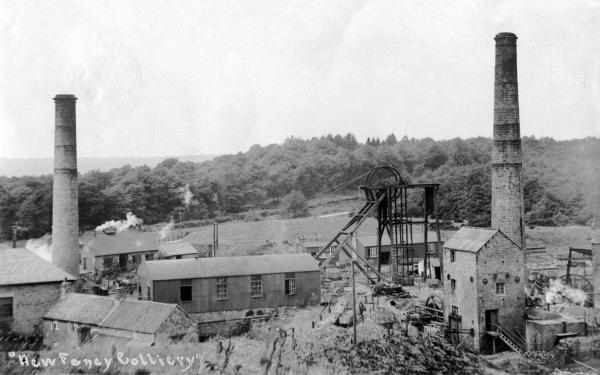 Wikipedia suggests thst the New Fancy colliery was opened by Edward Protheroe in 1827, as part of the Park End Coal Company in the Forest of Dean. It seems that he acquired the interest from his uncle in 1812. Details are scarce, however the 1841 Coal Awards confirmed the possession of the New Fancy gale to Edward Protheroe. In the Third Schedule to the 1841 Awards it is mentioned that in 1831 Edward Protheroe was granted a license to erect a pumping and winding engine at New Fancy but it is likely that this was not done as in a list of coal works in March 1841 there is no mention of New Fancy. The gale itself was certainly being worked by 1840, probably through the Parkend gale, as in that year Protheroe stated that he required a ‘better, cheaper, outlet’ for his New Fancy coals. The cheaper outlet would come about by sinking a shaft on the New Fancy gale thus avoiding the wayleave charged by the Crown on all coal from one gale passing through the barrier into another. The New Fancy gale award covered the coal in the Churchway High Delf, Rockey, Starkey, Park End High Delf, Little Delf and Smith Coal veins. 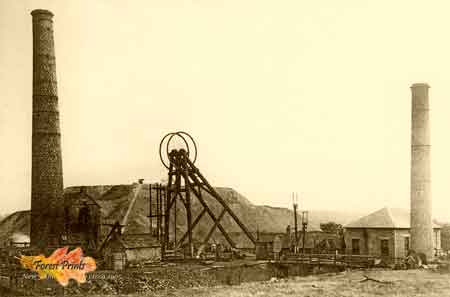 By around 1852 it seems that two shafts were being sunk. These seem to have been completed in 1857. At the first half-yearly meeting of the Forest of Dean Central Railway Company it was stated that the colliery ‘was in a forward state and will when opened afford large traffic’. The colliery was producing coal by 1860 when 250 tons a day were being sent over the Severn & Wye’s Kidnalls Mill, or Moseley Green, branch of the tramroad. A connection to this branch had been authorised and built in 1859. It was to be another ten years before the colliery gained a railway connection in the form of a branch of the Forest of Dean Central which was authorised under a Crown license dated 6th April 1868. The large traffic hoped for over this route diminished rapidly when the Mineral Loop was opened in 1872 and a connection was made to the colliery. It is likely that the rails on the Central’s connection had been removed by 1878. 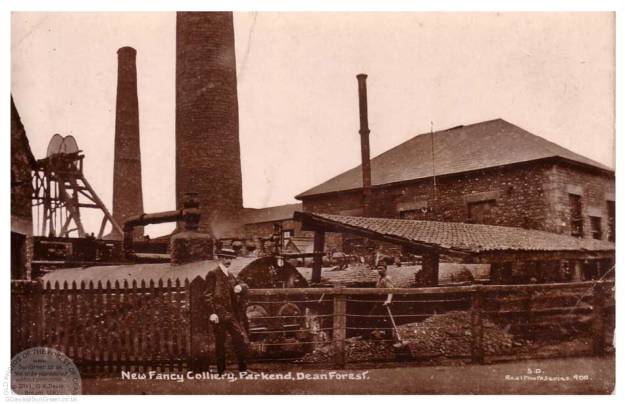 Wikipedia suggests that, by 1860, the Colliery was owned by Sully & Company and in 1885 was sold to the Parkend & New Fancy Collieries Company. However, this may be an oversimplification. By 1878 James Sully was the only remaining partner in the Park End Coal Company and the Parkend Coal Company Ltd. was formed to acquire the collieries. The subscribers to the new company were James Sully and Richard Sully, both described as coal merchants from Bridgewater, Somerset, John Nicholls, also of Bridgewater, William Unwin of Oxford, John Bailey, Sydney Thomas of Parkend House, colliery manager and Thomas Thomas. 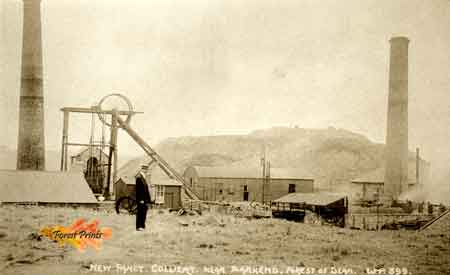 It appears that the new company may have been heavily in debt from the start. By 1880 it was in difficulties. At that time the company wasthought to possess nine-hundred acres of coal in the Starkey seam in connection with New Fancy. Probably the collieries were bought by a Mr. Jackson in 1881.
In 1883 the management of New Fancy were negotiating with the Great Western Railway, who worked the Forest of Dean Central, to be reconnected to their line at Howbeach as the rates via the Central to Lydney were 5d per ton cheaper. This was undoubtedly a ploy to gain cheaper rates from the Severn & Wye in which the colliery company was sucessful. However heavy mortgages led to closure in 1883 and a new confederation acquired the collieries in 1884.
New machinery was installed with the first compressed air coal cutters in the district and probably in the West of England being used. The reason for their introduction was the high cost of coal production at New Fancy due to the thinness of the seams. They averaged only 17 inches with the thickest being the Parkend High Delf at three feet.
In March 1885, the collieries were sold again to a new company called the Parkend & New Fancy Collieries Co. Ltd. From about 1888 onwards coal from the Parkend gale was worked out through New Fancy as the shaft was closer to the coal being worked and therefore haulage costs were reduced. In December 1889 a Severn & Wye minute records that the company had acquired the deep gales underlying their property and again asked if the S & W would give a concession on the coal rates as the colliery could be opened to the Central.
The company continued trading until in March 1892 the Parkend Deep Navigation Collieries Co. Ltd. bought up the company in exchange for 4,000 fully paid up £10 shares.
The Parkend Deep Navigation Collieries Co. Ltd. had been incorporated in October 1890 with an authorised capital of £100,000 in £10 shares. The subscribers were William Cooper, Parkend; William Esau Heard, Newport; John Witson, Cardiff; John Gething, Newport; William Thomas, Lydney; Arthur Graham, Parkend; and Percy Marfell of Lydney. The first 4,000 shares were allocated to the Parkend and New Fancy Collieries Co. Ltd. in consideration of their concern. A further 1,000 shares were issued to a John Griffiths of Willsbury for the purchase of the Rising Sun and Union Colliery from him. Up to 1904 only a further 739 shares were taken up as the number of members of the company was limited to fifty and it was not intended to invite the public to subscribe. Thomas Hedges Deakin was the Managing Director and Chairman of the company.
In 1914 electric equipment was installed to power pumping plant, haulage engines and coal cutting machinery. The generating station was alongside the Castlemain pumping engine at Parkend and a pole route was constructed to bring the power to the colliery.
The output of New Fancy steadily declined until final closure in August 1944. From 1940 it had averaged about 350 wagons per week.
The site of the New Fancy Colliery is a scheduled monument.
Railways
The Colliery was first served by a tramway, and then by two different railway lines … the Forest of Dean Central Railway and the Severn and Wye Railway Mineral Loop. The Forest of Dean Central Railway was very hopeful of a large coal traffic from the Colliery and was commercially dependent on that expectation. The Mineral Loop provided connections to a number of forest collieries and was a more successful venture than the Central Railway.