Kisoro in South West Uganda is dominated by a chain of Volcanoes – The Virunga Mountains. The closest is Mt Muhabura and it gives its name to the Church of Uganda Diocese that I visited in April – Muhabura Diocese. Of theses 7 volcanoes only one seems to be anything other than completely dormant.

Over the millennia, what were once deep valleys have been filled with the lava flows from these volcanoes, leaving small hills of sand stone in the area which once would have been high hills. The pumice stone which fills the valleys is very porous and allows water to flow below ground.

This means that in the wet season the area is lush and green but in the 3 month long dry season all the water in the area disappears underground, only to be seen at locations where springs come to the surface.

The village of Nyakimanga (pronounced Nyachimanga with a hard ‘g’) in lush and green in the wet season. but dry as a bone in the dry season. These two photos show the difference.  The first was taken in April this year. The second was taken in September 2013. For three months of each year the children, usually the girls, of Nyakimanga have to set aside their education to collect water. They walk around 5 km to the nearest springs

and then carry back heavy jerry cans full of water. It is a hard life.

I am delighted that St. Martin, Droylsden, The Good Shepherd, Ashton and a number of local Church of England schools raised enough money at Harvest 2014 to provide Nyakimanga with a water tank.

The money reached the village at around 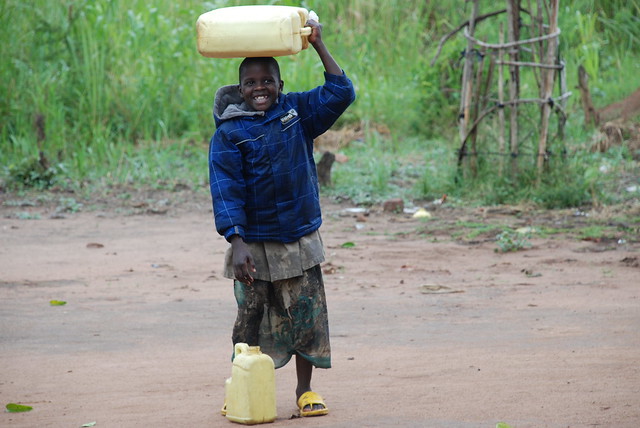 Christmas time and they formed a committee led by the local church leader and they have decided together on the size and construction of the tank. They have employed local contractors and the tank has been built. When I was in Uganda in April, they had completed the reinforced floor of the tank and were well on with the constriction of the walls.

Once the tank is completed it will be fed from the roof of the church and one of the local houses and it will hold enough for very basic use by villagers throughout the dry season.

They are overwhelmingly grateful to people in the UK who have given so generously.