As we noted at the start of the previous article about this line, Wikipedia gives us a very short history of the line from Strabane to Letterkenny and provides a single image – the Railway Clearing House map with stations in Strabane and Letterkenny: 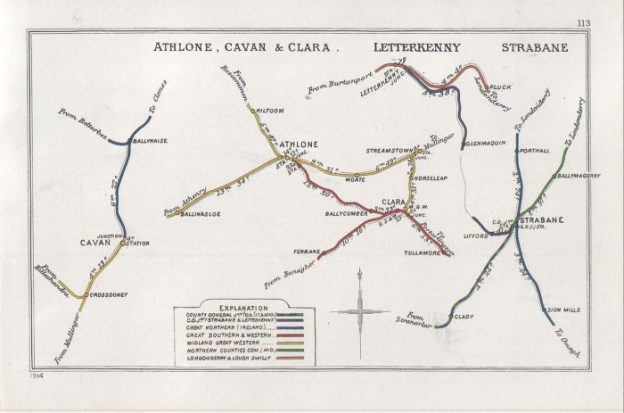 The Railway Clearing House map with stations in Strabane and Letterkenny. [3]

This series of articles seeks to expand our understanding of the route of the various Co. Donegal Railways through combining old images and modern views. Satellite images also give us a good understanding of what remains of the infrastructure of these lines.

A sketch plan of Raphoe Railway Station by Steve Flanders from the book ‘The County Donegal Railways’ [1: p43] This drawing is included by kind permission of Steve Flanders. 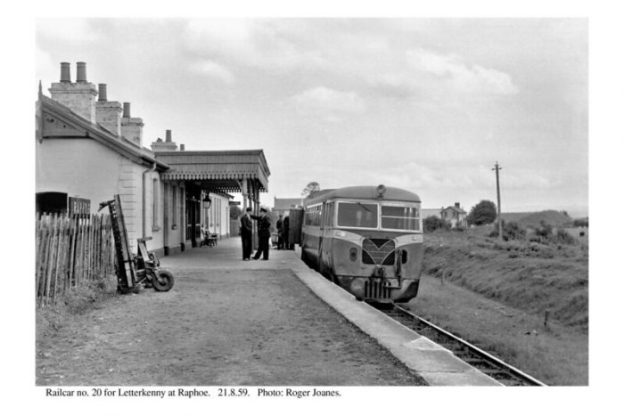 Railcar No. 20 at Raphoe Station, heading for Letterkenny in 1959 (c) Roger Joanes (CC BY-NC-ND 2.0) The Crossing-keepers cottage at the level-crossing to the East of the Station can be picked out to the right of the railcar. By this time, the passing loop shown in Steve Flanders sketch plan above had been lifted. [7]

Having enjoyed a stopover in Raphoe, we start the next stage of this journey back at the Railway Station at Raphoe and pick up the last image (above) from the previous article about the line:

Before we climb aboard Railcar No. 20 as it sets off for Letterkenny we look at the condition of the station site in the 21st century. The two pictures immediately below were taken relatively recently by Kerry Doherty. The first shows the location of the old station platform, the second looks from the West through the station site.

All that remains of the platform of Raphoe station. You can clearly see this shed is built on top of it (c) Kerry Doherty. [6]

This picture appeared at the end of the last article about this line. It shows the site of Raphoe Station in 21st century taken from a similar position to the Roger Joanes image above. The Station Master’s House on the left is the only building remaining on the site. Kerry Doherty comments that ‘it was difficult to get a photo of the site as many lorries now occupy the yard’, (c) Kerry Doherty. [6]

There are also two excellent photographs of Raphoe in Anthony Burges Album of the line. [8: p32-33]

Now we set off towards Convoy from Raphoe Railway Station. …….

GSGS 1940s Map of Raphoe and its Southwestern approaches. [2]

The site of Raphoe Railway Station in the 21st century. [4]

The three images immediately above show that the line began, gradually, to curve round to a Southwesterly direction as it left Raphoe Railway Station, before turning almost directly South at Aughnakeeragh.

At location ‘1’ on the map immediately above, the road turned sharply to the south so as to cross the railway on a bridge.

The narrow road crossed the old railway on a stone arch bridge. The railway cutting has now been infilled and the road alignment marginally improved (Google Streetview). This view shows the approach from Raphoe.

Crossing the bridge location and turning to look back towards Raphoe, this is the view (Google Streetview)

At location ‘4’, an accommodation bridge provided access across the old line.

The location of the old bridge is difficult to pick out on this image from Google Streetview. 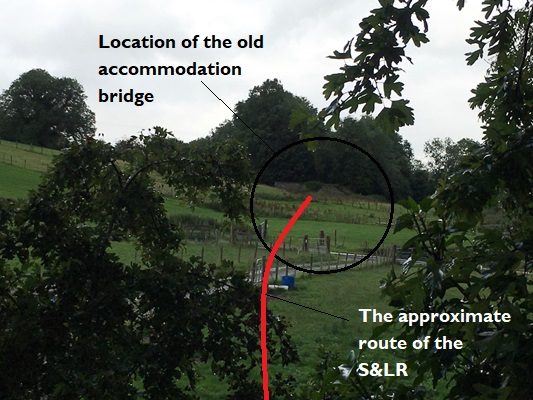 This image, taken by Kerry Doherty from the top of the bridge at location ‘3’ above gives a better impression of the remains of the old bridge. The S&LR was in cutting at the bridge but the land drops away towards the foreground and at the point of the modern access road in the middle of the picture, the line went from being in cutting to being on an embankment, (c) Kerry Doherty [6]

As noted under the picture above, at location ‘2’, the old railway was almost at the same level as the surrounding land with cutting to the East and embankment developing to the West.

A modern farm access road crosses the old line at the approximate location when natural land levels and the formation of the S&LR matched (Google Streetview).

At location ‘3’, close to Aughnakeeragh, the railway was carried over a road on a stone arch bridge.

This Google Streetview image shows the bridge viewed from the Southeast.

The Google Streetview image of the bridge taken from the Northwest shows it heavily overgrown by ivy. 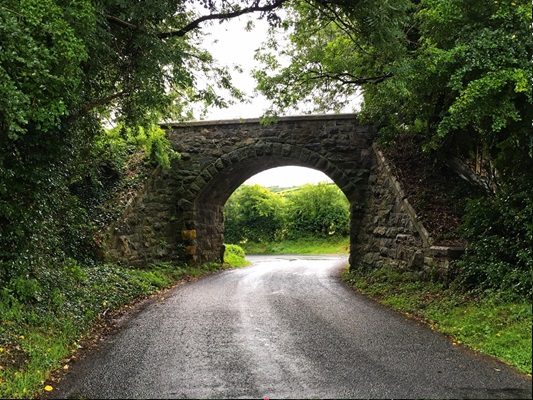 In this recent photograph, the bridge has been stripped of vegetation and is much more clearly visible, (c) Kerry Doherty. [6]

This Google Streetview image is taken from the road on the North side of the line, immediately to the West of the above bridge and shows the Railway embankment disturbed to allow vehicles to access land to the South. 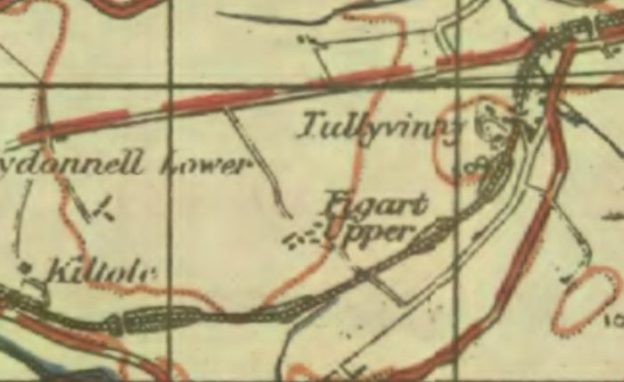 The next extract from the GSGS 1940s series of Maps shows the line to the West of Aughnakeeragh. [9]

After passing immediately to the West of Aughnakeeragh the line headed South for a Short distance before curving to the West once again.

There was an accommodation bridge which carried a lane across the S&LR at Tullyvinny. The location appears on the adjacent Google Maps extract to the Southwest of the road junction at the centre of the satellite image. The lane ran parallel to the S&LR for a short distance on the East side of the railway cutting before turning West across the line. The closest we can get on Google Streetview is shown in the first image below. 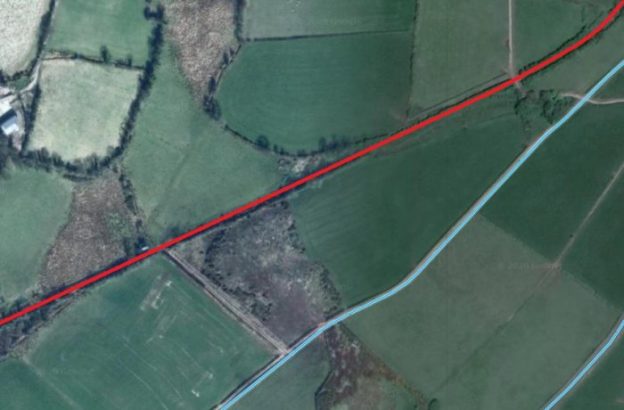 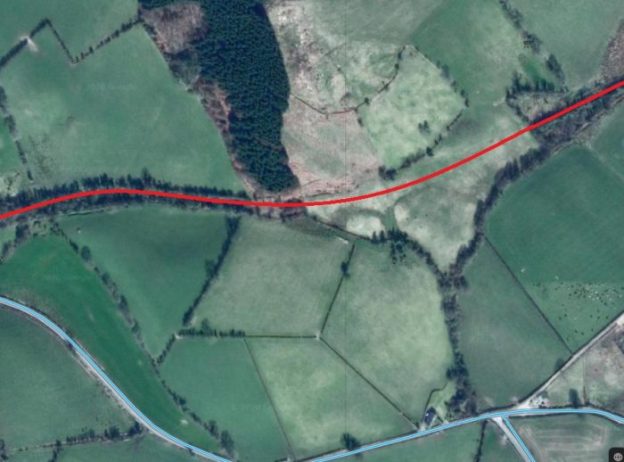 From Figart Upper Farm to Kiltole the old line was alternately in cutting and at the same level as the surrounding land but on the hill above the road which ran parallel to it to the South. An accommodate bridge over the line is marked by the black circle on the above plan and appears to relate to another structure which can be seen on the Goggle Streetview photograph below and which is taken from the road a little to the West of the accommodation bridge.

A lime kiln adjacent to the accommodation bridge referred to above. It seems as though the bridge permitted access to the lime kiln.  (Google Streetview).

Very kindly, when I first asked about this structure in very early October 2020, Kerry Doherty offered to investigate. He took his camera with him as he endeavoured to walk the line from the West. He gained access to the old line through a field adjacent to the Kiltole Quarry . His first photograph shows the formation to the East of the quarry.

The formation of the Strabane and Letterkenny Railway to the East of Kiltole Quarry, (c) Kerry Doherty [6]

Kerry’s trek along the line increasingly required him to struggle through bushes, small trees and thick under growth. The next picture is taken looking West from close to the lime-kiln and its bridge.

Kerry Doherty says: “It got almost impassable approaching the bridge beside the lime kiln. The bridge pillars can just be seen through the trees,” (c) Kerry Doherty. [6]

Kerry says: “I climbed the cutting to get a better shot of the bridge,” (c) Kerry Doherty. [6]

Looking across the accommodation bridge and then across the Lime Kiln to the South, (c) Kerry Doherty. [6]

Adjacent to the Lime Kiln the two approach walls to the bridge parapet railing can be seen. That to the East is curved in plan, (c) Kerry Doherty. [6]

Three pictures of the Lime Kiln follow. All again taken by Kerry Doherty:

The view from the Southwest, (c) Kerry Doherty. [6]

Immediately to the west, the road and old railway ran close together. This can be seen in this next Google Streetview image.

In this picture the formation of the S&LR can be seen in the trees immediately at the back of the land belonging to this bungalow (Google Streetview).

The line ahead now approaches Convoy. Although the formation is completely lost as it crossed the site of the now defunct Kiltole Quarry. The railway station was in the part of Convoy referred to as Milltown (to the East of Convoy itself), sited just to the North of the old mills.

Convoy on the Header National Townland and Historical Map Viewer. The route of the old railway has been imposed on the map as a thin red line. [11]

The approximate route of the old line through Convoy (Google Maps). The locations of the Gatehouse and the two road over rail bridges are marked. 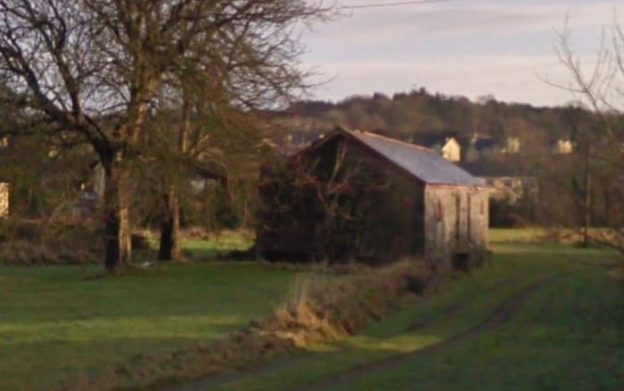 The closest view of the Railway Station site at Convey that is available on Google Streetview. The last remaining structure on the site is the goods shed. 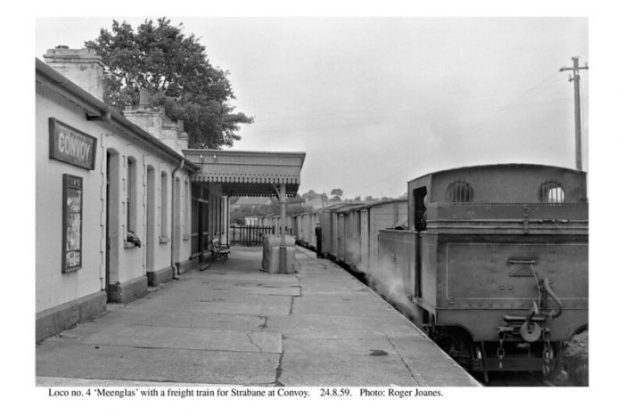