Speech House Hill Colliery was located at OS Grid Reference: SO614119. The featured image above comes from the Sungreen website © Mark Ward. He comments: “This lantern slide shows the Speech House Hill Colliery in c1908; I believe coal winning had ceased some years earlier and it looks as though dismantlement of the engine house had begun.” [2] Elsewhere the colliery is referred to as “Speech House Colliery.”

The signboard on the site of the old Speech House Colliery sits close to the climbing wall in the Beechenhurst Lodge area which is maintained by the Forestry Commission in the 21st century.

The Royal Forester Gale was first recorded as being worked in the 1830s and 40s by Richard James [1] of Whitecroft. In April 1832, he applied to the Crown for the gale but it was not granted to him.  Undeterred he erected buildings and commenced work ‘at considerable cost’ and his right to work the gale was confirmed by the Awards of 1841. [3]

In July 1856 an application was made to the Crown by the registered owners of Rose-in-Hand, Ephraim Brain and John Holingsworth, to make a tramroad connection to the Severn & Wye by means of an incline parallel to the Coleford-Cinderford road.  It would appear, however, that this was not costructed until 1869. [3] The Speech House Hill Colliery Co. had, by this time, taken over the Royal Forester gale. [1]

The Rose-in-Hand gale became part of Trafalgar Colliery and remained in the ownership of the Brain family. [3]

The Speech House Hill Colliery Co. was turn bought out by the Great Western (Forest of Dean) Coal Consumers Co. Ltd (a Crawshay company) in 1873. [1]

Although the tramroad connection was only completed in 1869, it was superseded by a railway connection  to  the Severn and Wye Railway in 1874. [3] The sidings in place in the early 20th century are shown below in the extracts from the OS Maps of the time. [4] 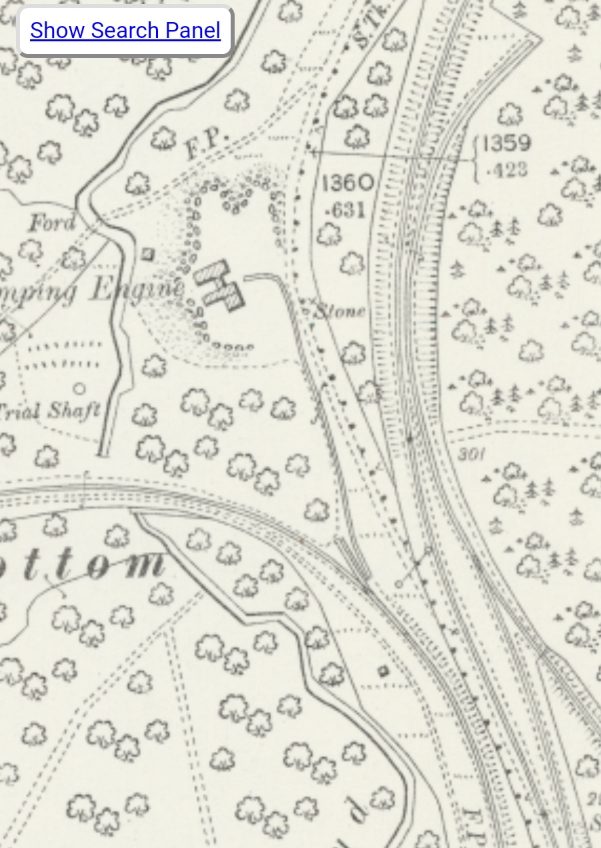 Rail access to Speech House Colliery involved leaving the Severn and Wye Railway in a Northerly direction and then setting back into the colliery. [4]

The track arrangement at the Colliery. [4]

The organising of the link to the colliery from the Severn and Wye was a matter for serous negotiation. “Crawshay offered the prospect of 100,000 tons of coal traffic per year, but laid heavy emphasis on the expenses to be incurred by the colliery in laying sidings, and intimated that they were considering sinking two pits near the Forest of Dean Central line at Foxes Bridge to avoid a steep underground pitching betwen the coal face and the existing pit bottom.  Concerned at the possible loss of such a lucrative traffic to the Great Western, the S & W agreed to loan rails, sleepers etc. if the necessary earthworks were done by the colliery company.  Following further discussions, it was decided to let the construction of the branch, and by July 1874 J. E. Billups was appointed contractor.  Part of the estimated cost of £3,300 was met by the Severn & Wye whose committee, on 5th April 1875, were conveyed to the colliery where they ‘had the satisfaction to find the Branch Line leading thereto as well as the Colliery Works in good order.  This colliery is now delivering excellent coal upon our line.'” [3]

Yields were not necessarily as good as Crawshay had intimated, 56,976 tons of coal were produced in 1880 from the Supra-Pennant Group (the top part of the Upper Coal Measures). The winding shaft (eventually 420 ft deep) reached the Churchway High Delf Seam (3 ft 3 in. thick) at 393 ft. [1]

The website, http://www.archive-images.co.uk has a series of images of the colliery, one of which is an underground view. These can be viewed, with watermark on their site or purchased for a relatively significant sum for each image. [5]

The colliery had a rather chequered history, passing through a succession of owners, until it was finally bought by Henry Crawshay & Co. Ltd, owners of the adjacent Lightmoor Colliery, in 1903. [1]

The barrier to the latter colliery was opened up and most of the surface works at Speech House Hill, no longer being required, were closed by 1906. [1] Crawshay’s prediction of traffic finding its way to other lines bore fruit some years after it was first intimated.

The main shaft at Speech House was maintained as an emergency exit for Lightmoor until the gale was surrendered in 1937. [1]

The area has been landscaped and now forms the Forestry Commission’s Beechenhurst Picnic Site which is a very popular Forest location. [1]

Looking South along the old Severn and Wye Railway along what is now the visitor access road for parking at Cannop Ponds. 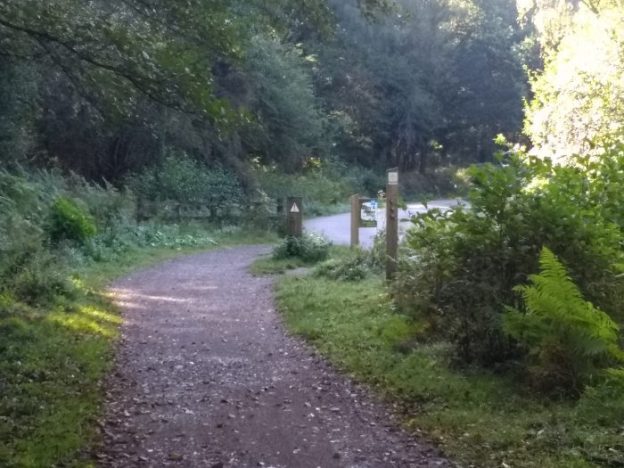 The view South from what would have been the end of the station platform at Speech House Road Station on the Severn and Wye Railway. 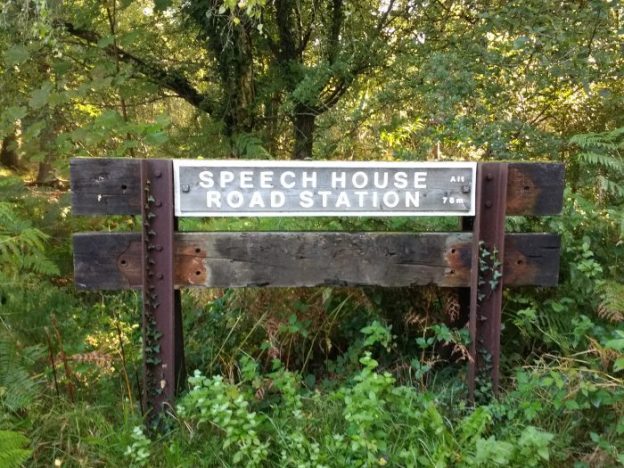 At the midpoint of the old station, the Forestry Commission have provided a station name board.

The view South from a point close to north end of the Station facilities.

The view from the modern highway into the old station site. In taking this picture, I am standing at the location of the old railway crossing.

Looking across the old railway crossing from the North. 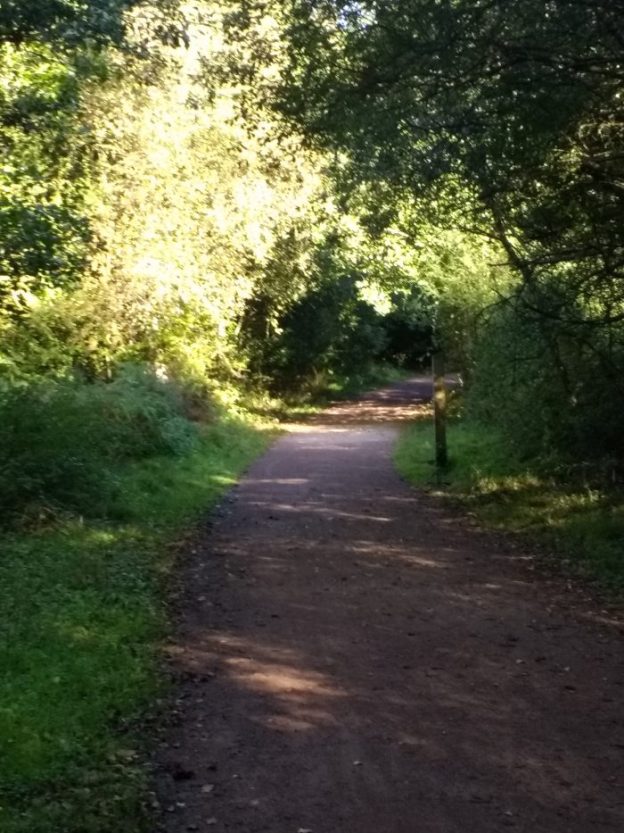 Looking North from the same point. 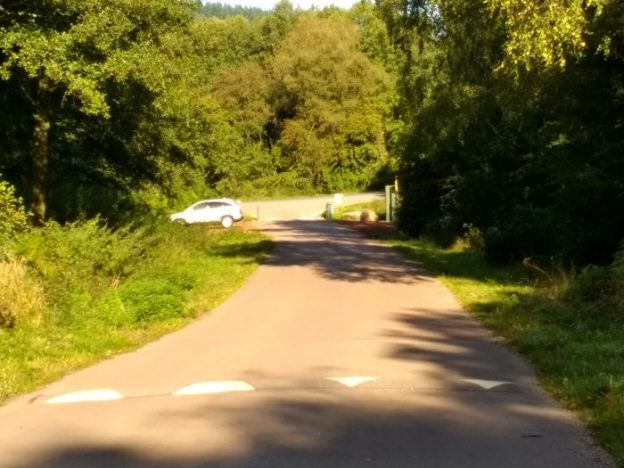 The area of the station goods yard is seen here from the South. The access road to Cannop Ponds runs through the site.