Nakuru railway station sits on the east side of the centre of Nakuru and to the east of the goods yard and MPD. The new station was completed in 1957.

Nakuru is a junction station. The original Uganda Railway travelled west from Nakuru to Kisumu on Lake Victoria and a steamer service provided access to Kampala via Port Bell. Once the railway was built to Kampala and beyond, the line to Kisumu became a branch-line. Before we travel on to Kampala on the main-line we need to explore the original line to Kisumu and its branch-line to Butere. Progress along the main line will need to wait for a later post.

We being the journey to Kisumu at Nakuru railway station, which, in its current form, dates from 1957.

The picture below shows the station yard at Nakuru around the turn of the 20th Century.

Once past the MPD, the line followed the Nakuru-Sgor Road (B4) for a short distance before swinging away to run alongside the Nakuru-Kisumu Road (A104). A short distance travelled on the North side of the A104 led to the junction between the Kampala and the Kisumu lines. The Kampala line set off in a northerly direction and the Kisumu line swung sharply away the south going under the A104 and then south-southeast to run alongside the Tarmak Road (A56) to Njoro and its station.[5]

111548: Mile 454-2F West of Nakuru Kenya Mixed to Kisumu 5812, © Weston Longford. [1] Another mixed train is shown in the picture on the right. The image comes from the Imperial War Museum and is entitled, “A Train Leaving Nakuru in the Rift Valley on the Long Climb over the Mau Escarpment to Kisumu in Kenya (Circa 1950s).” This mention of the Mau Escarpment has jogged my memory about an incline on the line to the West of Nakuru and this will require further investigation!

After Njoro, trains ran parallel to the C56 for a kilometre or so before meandering away to the south of the road only meeting it again at Elburgon.

At Elburgon the railway swings north, crossing the C56 and circumnavigating a residential area before swinging back once again towards the C56 and crossing two viaducts. These were two trestle bridges as can be seen by the shadows cast by the sun on the satellite image below.

Trestle bridges were the typical bridge structures on the Kisumu line. Two of these viaducts are shown in the images immediately below.[2] Both are © James Waite.

The line continues to follow the C56 on its journey to the next town, Molo, passing through the small settlement of Turi and over another trestle bridge close to that village.[3]

Molo Railway Station building, like others we have already encountered on the line, s built in stone and so feels a substantial building.

Alongside these notes are two photographs of the station building, they are traditionally shot and as such provide a good insight into what the building was like. The pictures which follow are part of a photo essay by David Mutuma which he has called “Lil’ Town in the Forest”. They are stylised and reflect his perspective on the buildings. They are enjoyable, but further than that, for the purposes of this blog, they pick up details of the station which I have not been able to find in respect of other stations on the line.[4]

Beyond Molo, the next station is Mau Summit. This is adjacent to the C56 and easily accessible.

After following the C56 and then the B1 road. The railway finds itself following a circuitous path through the stations above before getting to Fort Ternan. Over the last few kilometres into the town the railway follows the C35. The nature of the landscape means that a series of trestle viaducts were necessary to keep gradient as shallow as possible.

Fort Ternan had a triangle for reversing of locomotives as can be seen in the map extract above and the satellite image below.

We travel on through Koru Station, then Muhoroni Station, and we have pictures of that station below.

Then we pass through Chemelil Station, the picture below was taken sometime in the mid-1950s. [11]

Children cross the tracks at Chemelil.[5]

Further along the line we cross the Nyando River and pass through Kibigori Station. Now travelling due west the line passes through Miwani (below) and Kibos Stations before reaching Kisumu on Lake Victoria.

On the plan below the picture of Miwani, we can see the terminus at Kisumu and also the branch-line which heads westwards to Butere.

Kisumu’s station canopies are of a similar design to those at Nyakuru. Sadly, the station gets a lot less use than it used to. It has been closed for some time now and its condition is deteriorating. 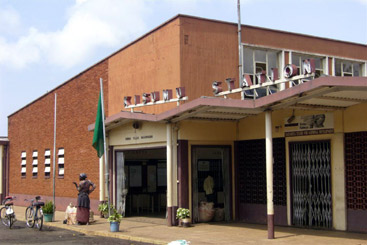 The town holds out a hope that the SGR which will soon reach Naivasha and will continue to Kisumu. The proposal that they have submitted involves the SGR taking over the site of the present station.[13]

The short branch from Kisumu to Butare will be the subject of a separate post.