I came across some photographs while doing some research for my posts about the Uganda Railway. Further investigation led to a discovery of a very early tramway system in Mombasa. The adjacent image was one of these. There are clearly a set of tracks running on the streets of Mombasa.

There were stations throughout Mombasa Island. The next picture shows the station at Kilindini.[1] It did not take long to find a significant number of other photographs showing the trolley and the tracks used. 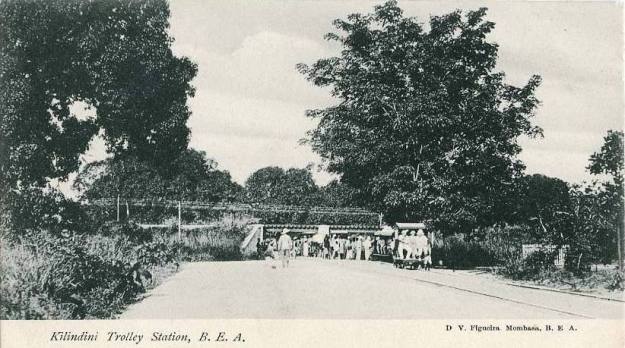 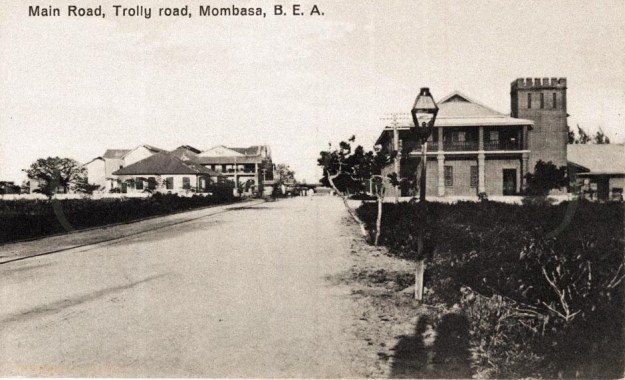 The trolley track, ran from Mbarak Hinawy Road (Vasco da Gama Street) to Government Square (Customs Area, Leven House) and on to Nkrumah Road (Macdonald Terrace) past the Old Law Court on to Kilindini. It provided access to the “Jubilee Hall” (put up to commemorate the English Queen Victoria’s diamond jubilee in 1897 and also used as a meeting place for Old Town elders until 1950’s) and veered to the right to the famous Mombasa Club which was also built in 1897 by the trader Rex Boustead.[1] 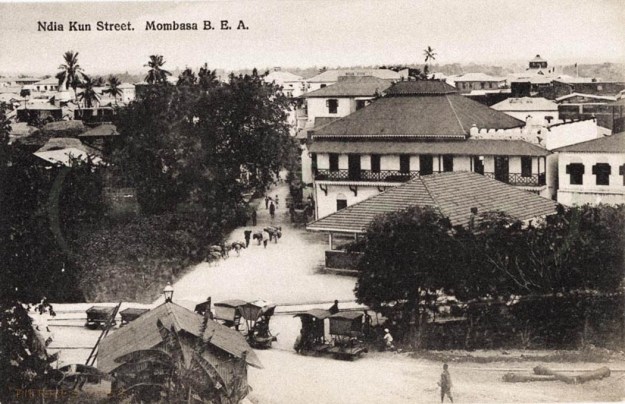 Old postcard showing the main street (Ndia Kuu) in Old town. You can see the trolleys in the bottom left hand corner of the picture.[2] 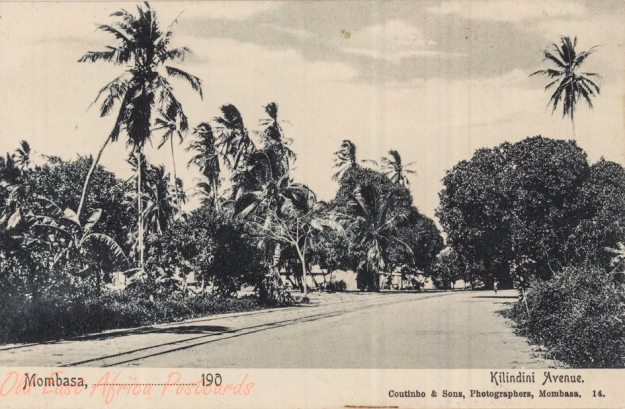 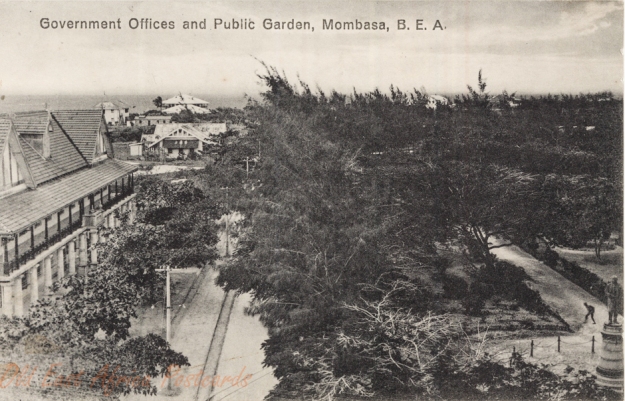 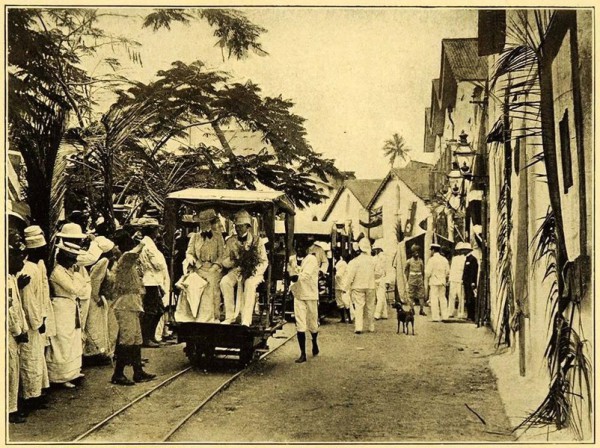 Between 1890 and the early 1920s, Mombasa Island was serv­ed by an unusual transport system. A light two-foot gauge railway line was laid across the island from Government Square (in the old port) to Kilindini docks, and on it were pushed by hand small trolleys which could carry goods or passengers. By 1903 a branch had been laid to the station (then in Treasury Square), the hospital, the sub-­commissioner’s house, the lighthouse at Ras Serani, the sports club and to the cemetery.

In 1900 it cost 4 annas to travel from Government Square to Kilindini, or 2 annas as far as the station. If two trolleys met on a single line, the lower ranking officer or civilian had to have his trolley lifted from the rails to allow his senior to pass.

The trolleys were withdrawn in about 1923, after which people had the choice of walking, hiring a rickshaw or taking a motor car. The first car arrived in Kenya in about 1900. A horse and carriage was a rare phenomenon, horses being very susceptible to local diseases.[1]

A replica trolley stands in the courtyard of Fort Jesus, on some reconstructed original line.[2] 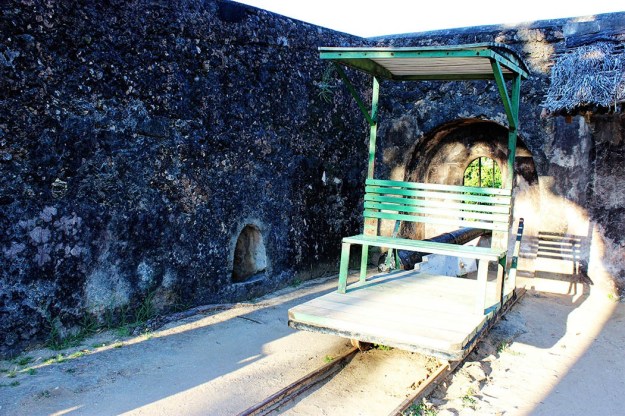 The track for the two-foot gauge trolley line came from an abortive attempt to build a railway into the interior, The “Central African Railway” which had reached a mere 11 kilometres inland from Mombasa Island![3]

The ” Central African Railway” had an interesting history ……. [1] The story which follows is sourced mainly from the Friends of Mombasa Website.

Sir William Mackinnon, the ship owner in charge of the IBEA (Imperial British East Africa) Company, lost no time in writing to Lord Salisbury, six months after the signing of the Brussels Treaty, suggesting Government assistance for the construction of a 60-mile (96.5 kms) railway inland from Mombasa. He also sought aid for opening up roads and forming “stations” along the route to Lake Victoria.

As a result of this successful appeal, the Director of the IBEA in London was able to send out sufficient materials and rolling stock for building a narrow gauge light railway to cost £50,000. The following year construction got under-way, starting from a point on the mainland opposite Mombasa Island, at the head of what has now become Kilindini Harbour.

It was given the very ambitious title of the “Central African Railway”, and as a symbol of the good intentions of the IBEA to open up the hinterland, sounded very impressive., but the venture got no further than seven miles (11.2 kms) before work stopped. Although it covered no more than a tiny fraction of the distance to Lake Victoria and the source of the Nile, the “Central Africa Railway” did secure a place for itself in history as one of the first railways to be built in East Africa, albeit no wider than two feet (61 cms) gauge. The tracks were later pulled up and, together with some of the unused rails, were re-laid to form the trolley line on Mombasa Island. Until 1923 this line was mainly used by Government officials, the more senior of whom had their own trolleys and received monthly allowances to pay the Africans employed to push them.

In its original form the “Central Africa Railway” was used only once for official purposes. It was used, however, as a stylish conveyance for picnic parties venturing inland from the port.

By 1893, the IBEA had withdrawn from Buganda, but remained temporarily at Mombasa until the British Government finally “took the plunge” by declaring a protectorate over the Buganda Kingdom and neighbouring lands as an alternative to outright annexation. It then began to consider a “proper” railway that would run all the way from the Indian Ocean to Lake Victoria. Not only would this be a really serious indication of Britain’s intentions to open up the interior for trade, and combat slavery, but it would be useful for transporting British troops, whom the government in London thought would be necessary for maintaining a permanent garrison at the source of the White Nile, near Jinja.

This post should perhaps, therefore have been written before may posts about the development of the Uganda Railway![4]

I was blissfully unaware of this little bit of railway history when I wandered round Mombasa Island before embarking on the night train for the journey to Nairobi and Kampala. 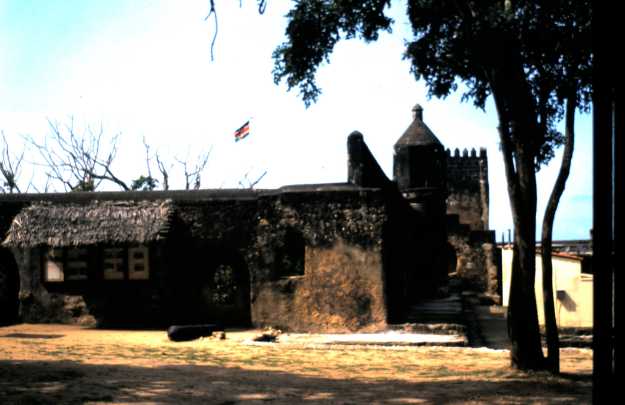 On the left of the picture above is a replica of a Mombasa trolley. [5]