Samaria was the area of Palestine which sat between Galilee and Judea. The central area north of Jerusalem. By the time of Jesus, it had become a Jewish ‘no-go’ area. The shortest route from Jerusalem to Galilee was North through Samaria. However, most Jews wanting to do this journey would set off in an Easterly direction – they would travel to Jericho, cross the River Jordan and then turn north, only crossing back close to Lake Galilee. Jews would avoid going through Samaria.

The Jews were strongly prejudiced against the Samaritans. The Samaritans were a mixed race – their ancestors were Jews who had remained in Palestine at the time of the exile to Babylon, and who had intermarried with other people groups who had been settled in the area as part of the Babylonian policy of ethnic cleansing. There had been a number of disputes between Jews and Samaritans down the years. We have a record of one in the book of Nehemiah were Sanballat opposes the rebuilding of the walls of Jerusalem.

However, by the time of Jesus, there were no current grounds for this prejudice. Jews and Samaritans were just two different people groups, sharing similar religious practices, living alongside each other. But Jews hated Samaritans, saw them as unclean, and would have nothing to do with them. And it is important to understand this if we are to begin to understand what people would have heard as Jesus told the story in our Gospel reading.

A Jewish man travelling from Jerusalem to Jericho, probably doing so because he wanted to avoid the region of Samaria, is robbed and left for dead. The upright Jewish 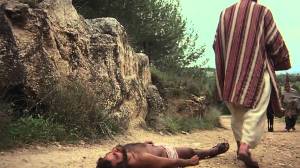 religious establishment gave the man no help, but a Samaritan – an unclean, hated Samaritan. Someone, who according to the Jews, had no goodness in him. The scum of the earth. He is the one to help.

As I read this famous story, I hear Jesus is doing two different things – he is setting a standard for neighbourly conduct and he is challenging people’s perceptions of reality.

I wonder how this parable might have gone if Jesus had been telling it in Manchester – perhaps in Oldham or Ashton. In the early years of this century we heard quite a lot about perceived ‘no-go’ areas in Glodwick and elsewhere. We’ve even heard of white people walking round the outskirts of an area, so as to avoid crossing Asian territory. Election results have shown a startling support for the more extreme right wing parties, even here in Tameside.

If Jesus has told this story in the white communities of central Oldham or to members of the EDL, who might his Good Samaritan have been? Perhaps a knife carrying Asian youth. Or if Jesus spoke in the midst of the Asian

community, the Good Samaritan may well have been an over-weight skinhead with union-jack tattoos who belongs to the EDL. In Jewish culture the words ‘Good’ and ‘Samaritan’ just did not belong together. And in some of our communities it is nigh impossible for people in one area to think well of those in another.

Jesus challenges prejudice and hatred by making the perceived enemy, the saviour in the story.

How would the story translate in the area immediately around the church of St. James in Ashton? If Jesus were to tell a story about one of the people living on Cow Hill Lane being mugged, who would the other main characters be? The priest …? Me or one of my colleagues? … The Levite …? Perhaps the closest would be a churchwarden or treasurer or church council secretary.

Starkly, in this version of the story, we are seen to take one look and because of our own fears to walk by, to get into our cars and drive quickly out of the area. Perhaps a quick call to the police on our mobile phones! Who would the ‘Good’ Samaritan be? …

You might not know, but 8 to 10 years ago St. James’ Church was very close to being burnt down. Someone set a bin fire against the wall of the vestry. Who was it that dealt with the problem? I know that at times we have made comments about our neighbours, but it was  a local Asian Muslim lad who with his bare hands dragged the bin away from the vestry wall. And you know what he said to me. ‘Someone is trying to burn down my church!’

Even if we think there is little of overt racism as we look around us in our neighbourhood, or as we look at each other. Actually we all need to acknowledge our own personal prejudices. It is so easy, isn’t it, to think in terms of them and us, so easy to harbour negative thoughts about those we perceive as different from us. And we do make comparisons, don’t we, and so often when we make those comparisons, we compare our best with the other’s worst.

We have been encountering these issues for real in recent weeks. Since the Brexit vote, hate crime and religiously motivated crime has risen five-fold (So the Sun tells us : https://www.thesun.co.uk/news/1372072/hate-crime-reports-of-abuse-up-500-per-cent-since-brexit-official-figures-show). It is as though a vote to leave the EU has been seen by many as an excuse to let rip with unacceptable views. All we have actually done, whatever our motivations, is voted to leave the EU. We remain a part of a global community, we continue to need those who have moved to live in this country over many years and if most of us could trace our ancestry back we would find that we originate from outside this island – all of us do. 10,000 years ago at the end of the last ice-age there was no one living here. We are all immigrants or descendants of immigrants, all of us.

Four days ago, in the house of Lords, our Archbishop, Justin Welby, urged political leaders on both sides of the Brexit debate to take on the “xenophobia and racism” that has been prevalent seen since the decision to leave the EU. (https://www.politicshome.com/news/europe/eu-policy-agenda/brexit/news/76966/archbishop-canterbury-eu-referendum-has-created. He reminded us that it is unacceptable to refuse to guarantee the rights of EU nationals living in Britain, speaking of the “unacceptability of treating people like bargaining chips”.

Justin Welby said that “The referendum campaign was both robust – as it properly should be on such great issues – but at time veered over the line on both sides into not merely being robust but being unacceptable.”

“Through those comments were created cracks in the thin crust of the politeness and tolerance of our society, through which since the referendum we have seen an outwelling of poison and hatred that I cannot remember in this country for very many years.”

He said there was an urgent need to “tackle the issues of inequality”, which he said “raises the levels of anger, resentment and bitterness”. He called for a renewed focus on investment in education, housing, and public and mental health services to deal with the problems. But he was very clear that we all must challenge the attacks, the xenophobia and the racism that seem to have become more acceptable.

In the Gospel, Jesus is calling us to neighbourly conduct, to crossing perceived boundaries to help others in need, to be Good Samaritans. He is calling us to be good neighbours to all, not just those like us. And he is challenging us to question our own prejudices and assumptions. Just as the actions of the Samaritan would have shocked conscientious Jews, so Jesus wants to shock us, to help us to see the good in those we so easily despise.