In August 2014, I wrote a very short blog which mentioned Graham Turnbull. In 2015, I had a call from a Daily Mail journalist asking me about Graham. His death in the 1990s had been linked with the arrest in June 2015 of Karenzi Karake, Rwanda’s intelligence chief on a European Arrest Warrant.  Karake was wanted in Spain for war crimes. He was accused of ordering massacres while head of military intelligence in the wake of the 1994 Rwanda genocide. Later in 2015 he was released from custody in the UK.

The Spanish indictment named Chris Mannion, a British Catholic missionary shot dead in 1994, and Graham Turnbull, an aid worker and observer with the UN High Commission for Refugees killed in 1997, among foreign nationals who were targeted alongside thousands of Rwandan Hutus in the aftermath of the genocide, during which ethnic Tutsis and moderate Hutus were massacred wholesale by Hutu extremists.

I wonder, is there anything that you think it is worth dying for?

Perhaps if those you love were threatened? …….

What would you risk your life for?

I first met Graham Turnbull when I was staying in Uganda in 1994. Graham had given up his job as a solicitor in the UK, driven across the Sahara to deliver a landrover to Rwanda and had the intention of teaching English in a small town there. His visit coincided with the genocide in Rwanda and he could not get into the country. We shared a house for a short while in Kisoro in SW Uganda.

I can only find this picture of him taken in 1994 on a trip out to inspect some of the main road bridges in Kisoro District. Graham is facing away from the camera in the blue top.

After I had returned to the UK, Graham later managed to get into Rwanda and taught there for a time. About three years later he felt that God was asking him to be a UN observer in Rwanda. A very dangerous occupation. He wanted to do what he could to stop some of the killing which was still going on. He and his family prayed about this for some time and everyone agreed that Graham should apply for the job. It was in 1997, I was listening to the BBC news at 6 o’clock and there was a report of a group of UN observers being killed in Rwanda. Graham was one of them.

Graham gave up life in this country to serve God, and died doing so. He was 34 years old when he died.

British soldiers around the world are similarly risking their lives on a daily basis for the cause of peace and justice.

What would you be prepared to risk your life for?

That might be too hard a question to answer, so let me ask you a perhaps easier question – I wonder what it would take to make you stand up and be counted?

At times I’ve lobbied the local MP about third world debt. A little while back some of us felt that it was right to try to fight the introduction of a sex shop near the centre of Ashton. There has been the rise and fall of the British National Party and the English Defence League  – an increase in racist views. ……….

What kind of issue would be big enough for you to do something in a committed way?

We are usually reasonably happy if someone chooses to write a few letters, or to do a bit of campaigning, provided of course they don’t go overboard about it! But what would make you act, even at the risk of the disapproval of others? 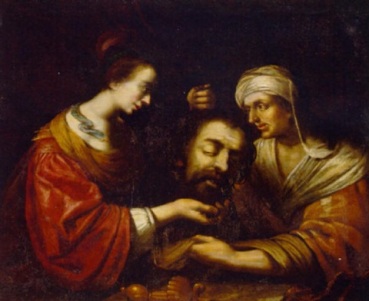 John the Baptist, in Mark 6:14-29, was prepared to make a stand. His stand against Herod’s wrong relationships cost him his life.

For the sake of God’s work and God’s Word, for the sake of truth and justice, John was prepared to die. He was willing to be a martyr for what he knew to be right, for his faith. And John is not alone – for down through the centuries many people have seen their faith as more important than their own lives. Astoundingly the 20th century saw more Christian martyrs than in all 19 previous centuries since the birth of Christ, put together.

As Christians we talk sometimes about being a prophetic people. A people who model God’s love and God’s life in the world. John the Baptist, and Graham Turnbull model for us what it means to be prophetic. When we see injustice, when we see wrong, when people around us are far from God – we need to take up their challenge. We need to do something about it.

If we talk about our Christian faith we may feel foolish, we may even suffer rejection. If we stand out and speak against injustice, it’s possible people may become fed up with us. But these afflictions are nothing compared to what our sisters and brothers around the world or down the centuries have faced for the sake of the Gospel.

Working with the ongoing campaign for the relief of debt. Speaking out against injustice in our own communities. Fighting for the human rights of asylum seekers. Taking action on behalf of the oppressed. Talking of, and living out, the love of God in our communities. These, and things like them, are just small steps in the footprints of those who have gone before us.

My friend Graham decided that there were things that were worth more than his own life. Not selfish things, but things which benefited others. British soldiers have died in Afghanistan and in many other places in recent years. It is unlikely that any of us will personally be faced with the same kind of life and death issues. But we live in a world where everything is not right, where injustices exist, where people live in fear and have little or no hope. Graham and others like him are a challenge to us all.

We too need to be courageous, to be willing to act. And as we do these things we know that we do not stand alone. We stand with people like John the Baptist, like Graham Turnbull. We stand with many people that we call Saints.  But more than that, we have Jesus’ promise to his disciples. “I will be with you always – even to the end of the age!” We have Jesus walking alongside us as our friend, strengthening us by his spirit. Enabling us to be his servants. Whatever actions it is right to take, whatever decisions we face, we are definitely not alone.