Living and working in the North West of the Country has many benefits!

We are proud at St C’s to see two women priests (Tracy Charnock, former curate and Penny King, former parish assistant) with a Chrysostom’s connection featured on a Church of England website seeking to attract clergy to the north. In today’s edition of ‘The Times’ the story is taken up. Here is the article from The Times (28 Feb 15) 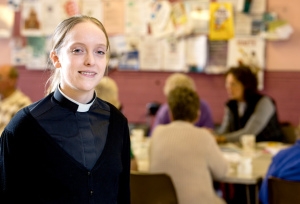 When Penny King told her university friends in Canterbury that she was moving to Manchester, they were horrified. “They said ‘you’ll get shot! You’ll get mugged! It’s depressing. It’s all grey and the weather’s awful’. ”

The perception that life is “grim up north” has greatly damaged the Church of England’s attempts to fill posts in the north, where some jobs for vicars…