Scouts in Tameside have paid touching tribute to fallen soldiers from their parish including a former leader who was killed in the Great War. The 3rd Ashton St James’ group created their own ‘field of poppies’ with a flower to represent each of the men who didn’t make it back.

The floral display to 129 soldiers who died between 1914 and 1945 was unveiled at St James’ Church, on Cowhill Lane, to coincide with the centenary of the start of the First World War. They included former scout leader Herman Hodge who was just a teenager when he was killed although his body was never found.

Derek Casey, 77, is now chairman of the group which he first joined as a child in 1945. He said: “The idea came about for Scout Community Week where we come together to improve the lives of our local community. A lot of men went, not just from our church but from churches across the land. This year with it being very much in people’s thoughts, we thought it would be nice to remember the part that the community of St James’ played.” 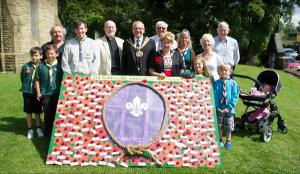 He added: “Every name that’s shown on the memorial window in the church will be put on an individual poppy. We had a scout leader who was killed called Herman Hodge and we have a copy of the letter that was sent from the war office to his parents.

“In those days, you can imagine it was a very close-knit community. I think the important thing is not glorifying the war, it’s commemorating it and remembering the people who left St James’ and didn’t return.”

Inside Tameside provided this story:

A special ‘Field of Poppies’ will go on display in Ashton this weekend.

The 3rd Ashton St James scout group have created the ‘field’ in remembrance of those who gave their lives for the parish. In this year’s scout community week, the cubs, beavers and scouts took inspiration from the Window of Remembrance memorial in the church that bears the names of those who died in both world wars.

They  have been busy making their own poppies and to each one is attached the name of one of the soldiers. Altogether, the group have made 150 poppies that will be put together to create their Field of Poppies. Some of the names on the poppies are family members of the scouts in the group and one former scout form the group, Stephen Crane, is now serving in Afghanistan.

The Field of Poppies will be unveiled at the Remembrance Day service at the church on Sunday and will be on public display at the church from Monday between 12 noon and 4pm. The group cordially invites the Community of St. James’ Parish, the wider community of Tameside, members of local voluntary organisations, local clergy and councillors to come and view their work but also remember the men who went forth, did their duty and didn’t return to their loved ones. 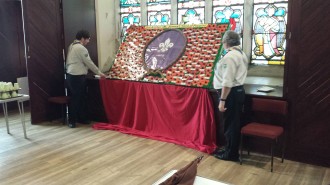 There is also a further opportunity to add more poppies to the “Field” if any person would like to add a poppy in remembrance of someone they know who fell. Refreshments will be available throughout the viewing period.

The group thank Atlas Trading and JLS Designs for their donations and help with the project.