We start this next post with a variety of images from the station at Voi, and from its immediate surroundings. The first picture is the featured image which shows the publicity photo for the railhead reaching Voi in 1897. 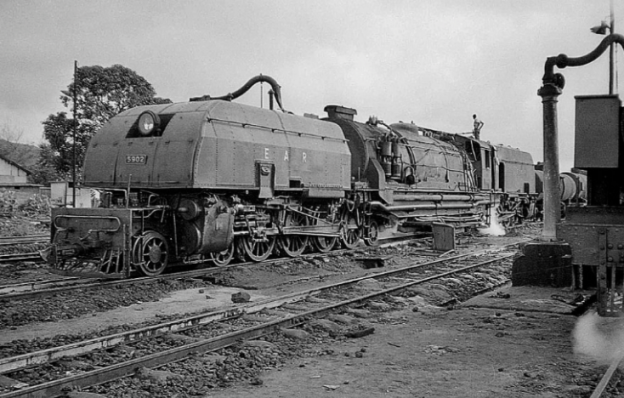 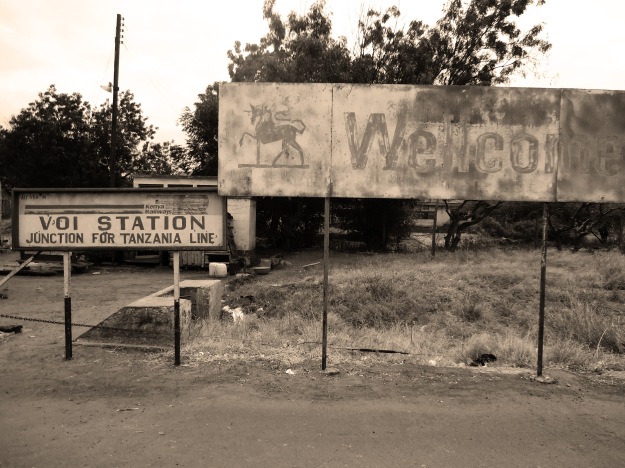 EAR Class 59 Garratt No. 5902 “Ruwenzori Mountains” heads away from Voi with a Mombasa to Nairobi Goods train on 10th December 1976 © Bingley Hall, on flickr.[2] 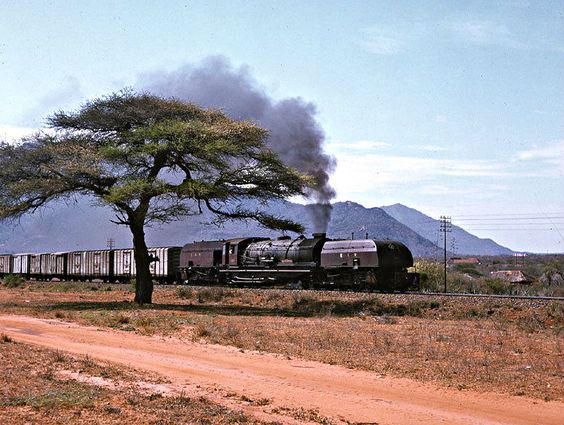 The map shows the branch-line to Moshi as a dotted line turning away from the A109 and following the A23 to the bottom left of the image. The route is bridged by the SGR. The next two images are taken of trains on that branch-line. Both show the same locomotive, Class 60 Garratt No. 6013, © CPH 3 on flickr.[3] 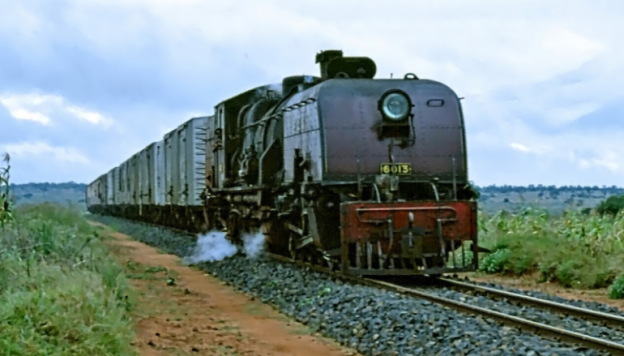 Travelling north from Voi and after the branch to Moshi turns away to the West, the line passes through Irima, Ndi and Manyani Stations and between the two game reserves of Tsavo East and Tsavo West in a corridor which also includes the A109 road between Mombasa and Nairobi and the new SGR.

The SGR and the A109 run consistently parallel to each other the metre-gauge line follows a route which best works with the contours of the land. All three pass through Tsavo.

Tsavo railway station was some distance from the village. 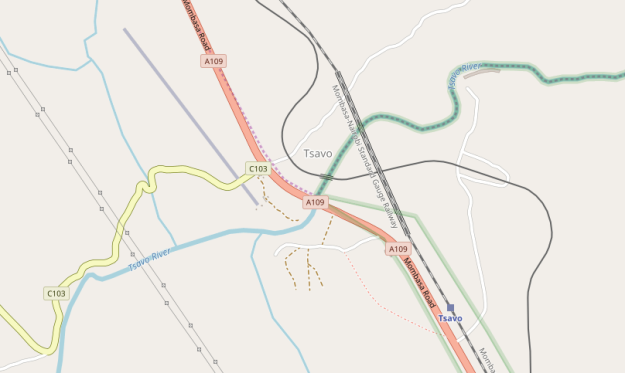 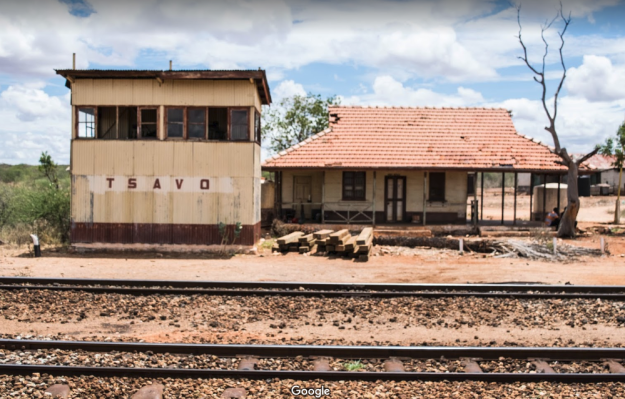 An image from google maps. [7] 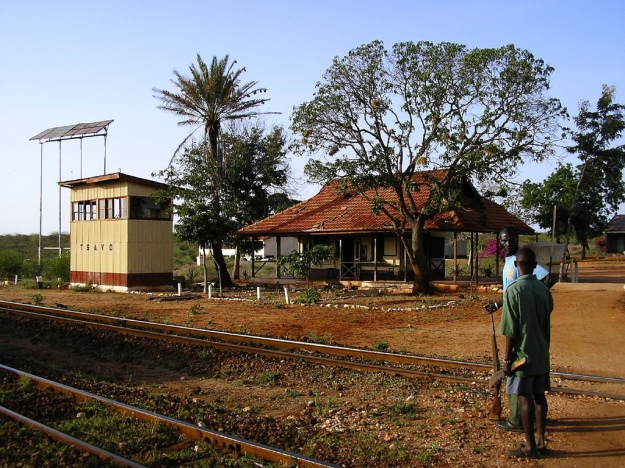 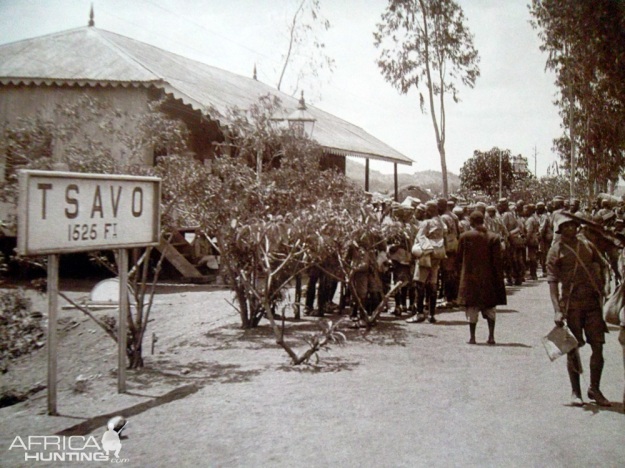 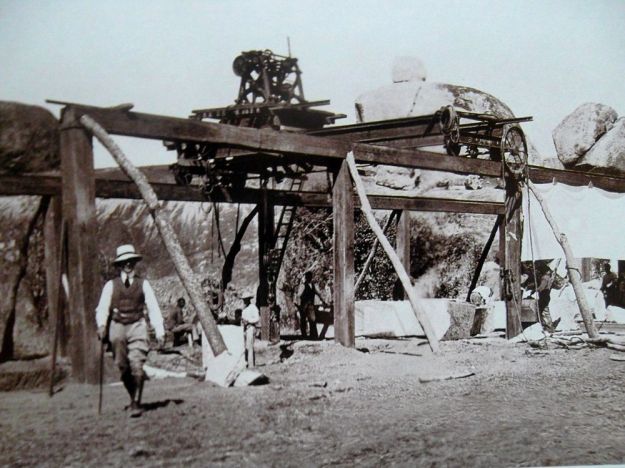 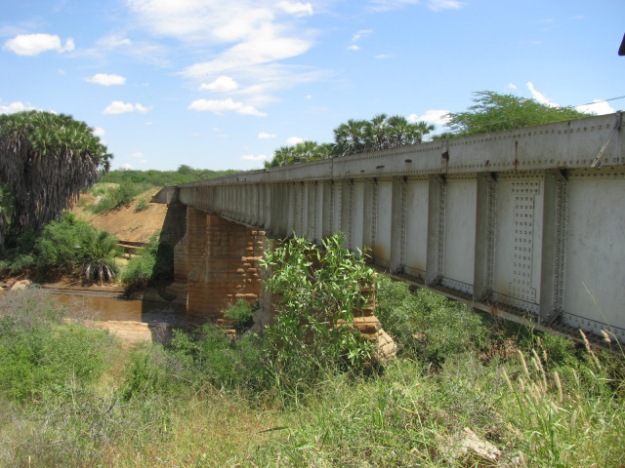 Another shot of the bridge. [6]

The last image at Tsavo shows the construction work on the SGR viaduct across the Tsavo River … all along the length of the new line provision is made to allow wildlife access under the line and to avoid high-speed collisions between trains and wildlife.

Moving on from Tsavo the line continues to meander in a generally North-westerly direction for a number of kilometres on almost exactly the same line as the SGR, through Kyulu Railway Station.[9]

And Kenani Railway Station,[9] and then Kanga, before reaching Mtito Andei.

Mtito Andei is the nearest stop on the SGR to Tsavo.[10] 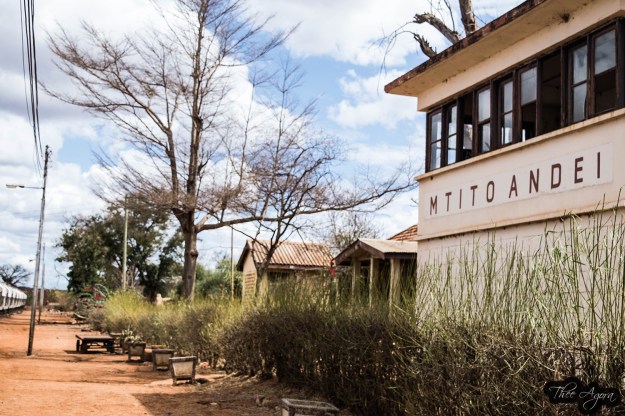 It supersedes the station on the old metre-gauge line, although that line may well remain open for goods traffic.[9]

The last three sepia pictures are courtesy of the UK National Archive. [12]

Plan of Makindu Station and sidings.[12] The following photos are from Dr Gurraj Singh Jabal [14] and a few other sources. 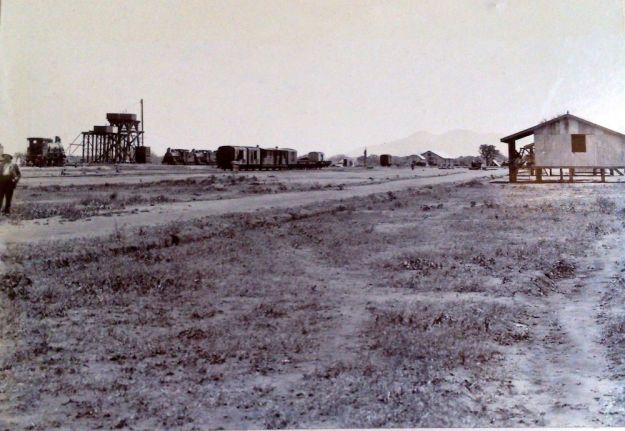 After Email, is passes through Nzai, Sultan Hamud, Kima, Kalembwani and Kiu Stations before reaching Ulu. 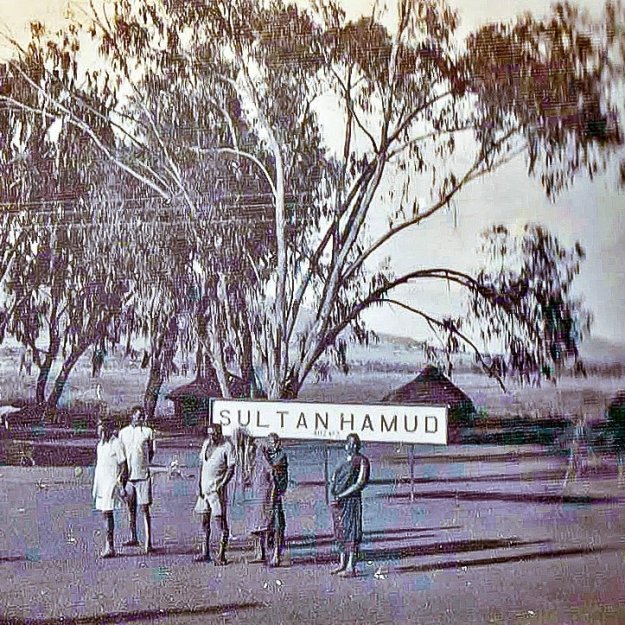 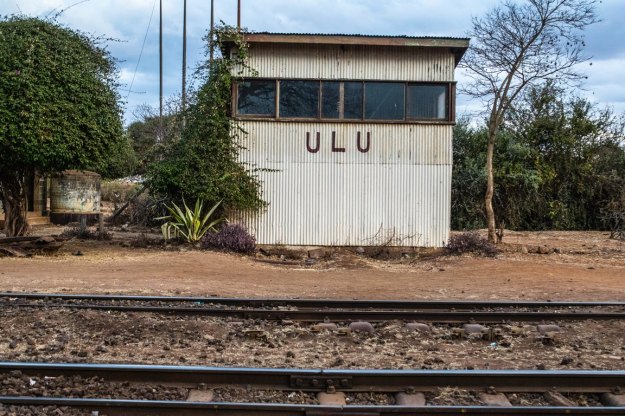 We finish this leg of the journey at Ulu and look forward to travelling on to Nairobi in the next post.

4. http://www.mccrow.org.uk/EastAfrica/EastAfricanRailways/NairobiMombasa.htm, accessed on 19th May 2018.

9. http://www.savetherailway.com/railway-stations, accessed on 18th May 2018.

11. https://www.flickr.com/photos/hadenoak/29842259871/in/photolist-Mt4oaV-kaYDpr-8nLN2m-bPabo4-bAfL3A-aCVMTM-FLyXgK-FRQ2qr-GxHPuU-GxHPKy-bPapRi-bAfwiy-NQoAC-r4WnTo-aWe2DD-fnT25s-bokDL-9HDBH5-6EDL3M-jh9DA9-aWiuJx-Jz64hu-NA9jZ-LbXZSJ-f9iWQE-8u155z-peR8pW-8oNqcF-aWivXi-7wknz8-9WNrqo-aWivNx-cyUfZw-aWe2z2-aWitUR-cyUfJ7-7wkniM-9ePedD-aWivAV-aWe3YH-6EDKRv-aWe1PD-aWe2wR-ReNwV5-LinKah-aWe39x-dZgfjY-8NqyQB-aeZZzh-7XevFt, accessed on 20th May 2018.

14. http://www.savetherailway.com/remembering-makindu-station, accessed on 20th May 2018.