What does it mean to ‘have faith’?

Jesus says, “If you have faith the size of a mustard seed, you could say to this tree, ‘Be uprooted and plated in the sea’, and it would obey you.”

Jesus seems to be saying: “If you can screw up enough faith, if you pray hard enough, if you really believe, then you’ll be able to do powerful things. You’ll be in control of life and God will be able to work through you! If you are just prepared to leap across that chasm believing that I will miraculously get you to the other side, then you are my disciple!  ”

But is he really? ……  Or is it rather the case that we hear him saying what we think he is saying rather than listen to him properly. After all, what do we say when things go wrong for us? …… “What have I done to deserve this?” “Why is this illness happening to me?” … It is as though we do really believe that we have the power to make our circumstances right, just be being better people, by having more faith?

And so, when we hear the word ‘faith’ we so often think of something rather like the flexing of spiritual muscles, or determinedly screwing ourselves up to believe. “If only I had more faith,” we say. “If only I really believed.” … And so many of us fail to achieve this … and as a result so many turn their back on ‘faith’: “It does not work,” they say.

And so when we hear those verses in Luke 17 we hear Jesus saying something, perhaps quite sarcastic: “Faith, don’t talk to me about your faith, you have not even got enough to fill a mustard seed, if you had you’d be doing all sorts of marvellous things in my name.”

But when we do so, we miss the point.

What Jesus is actually saying is something much more like this: “Faith is about trusting in an all powerful God, it is about living faithfully to what you believe, it is about faithful service. Just a tiny little bit of that kind of faithful living will change the world.”

Where is the evidence for reading the Gospel this way?

Firstly, there is the whole of the reading above. In the first two verses Jesus talks about faith – but then he goes on to talk about masters and slaves. He could be talking about the way in which the physical world should obey its masters, those masters being his followers who have faith. But I don’t think he is. Let’s just focus on Luke 17:10 which tells us so much about ‘faith’ …

Jesus says: “So you also, when you have done everything you were told to do, should say, ‘We are unworthy servants; we have only done our duty.’”

Second, there is that word ‘faith’; ‘pisteo‘ in the Greek. It is used consistently through the Greek version of the bible for being faithful, trustworthy, sure and true. Just here in Luke: 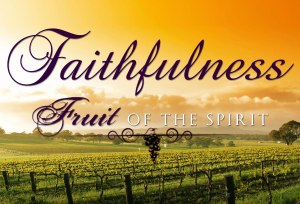 In each of these cases, and throughout the New testament, it is the same root word,  ‘pisteo‘. So when Jesus uses the word ‘faith’, he is not asking us to screw ourselves up to believe, but he is asking us to live faithfully to what we believe, to be his trustworthy followers. To be faithful and prudent. “Those who live this way,” says Jesus, “Are people of faith. … And, (in the figurative language that he is using) it won’t just be a mulberry tree that is uprooted, even the gates of hell will not prevail against them.”

Leave a Reply to What is Faith? Cancel reply