Did you know? Perhaps you did, but I certainly did not!

There is a long length of metre gauge double track railway in Caithness!

Perhaps a more significant question might be what the longest thing ever to travel on a railway is. Do you know?

I think, today, that I have just discovered the answer and it is to be found in the same place in Caithness in Scotland.

If you don’t know, have a guess before reading on.

Let’s talk about the first question first. A double-track narrow-gauge line in Caithness. Are you serious? Yes, Caithness in Scotland. That’s the one. Still think I have made this up. Perhaps the two maps below will help to persuade you. They show the full length of the line. 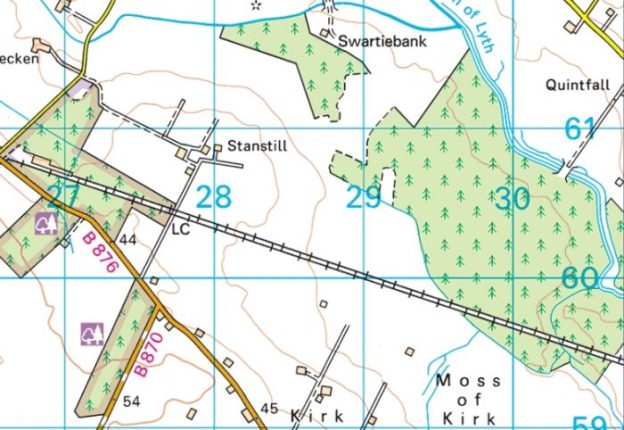 OK. So there is a map with this line on. Where exactly is it?

Just north of Wick, near where the Burn of Lyth outfalls into Sinclair’s Bay and it been there for around 41 years!

What other evidence is there for this line? Just check the references below and look on Google Earth![1][2][3][4]

Google Earth shows the full length of the line!

Yes, it really is a railway. It is shown here in 2014 with track relaying in progress! © Tom Hankinson. [5]

At the mid-point of the beach which borders Sinclair’s Bay, says Tom Hankinson, “there’s a major industrial plant called Subsea 7. There’s a dead straight rail line from it stretching over four and a half miles inland, and I’d had no idea of its purpose. When we crossed it the rails seemed to have been lifted, but they were obviously still working on the track’s bed, with diggers and other heavy equipment laced ready for work. Fortunately an explanation was offered by a tiny plaque on the bridge that crosses the track. It’s a manufacturing plant for underwater pipeline clusters.” [5]

The next image is taken within the factory site.

The site is owned by the company Subsea 7. They have this to say about the facility: “Established in 1978, Subsea 7’s Pipeline Bundle Fabrication Site is located 6 miles north of the town of Wick, Caithness in the far North of Scotland. This unique site runs 7.8km inland, covers a total area in excess of 300,000m² and has a sheltered bay in which to launch the Pipeline Bundles.” [6]

The site is geographically situated to service the West of Shetland fields, North and Norwegian Seas. The site is 7,800 metres  in length with a total area of over 300,000m². It can produce lengths of pipeline up to 7.7km long. There are four construction tracks providing a total capacity of almost 28km for pipeline bundles and associated work.

Subsea 7 goes on to say that a pipeline bundle integrates the required flow lines, water injection, gas lift and control systems necessary for any subsea development and assembles
them within a steel carrier pipe. At each end of the pipeline, the structures, manifolds, incorporating equipment and valves, designed specifically to the requirements of the field, are attached. The fully tested system is then launched and transported to the location using the Controlled Depth Tow Method. Once installed no trenching or rock dumping is required.” [6]

There is a total of 50,000m² of pipe storage areas. The main line pipe storage area is serviced by two 10t Goliath Cranes. There are also a number of dedicated areas for the storage of project materials and consumables including, the main store and dedicated satellite stores where smaller items are contained.

“In order to move the completed Bundles from land to sea, a 240m launch way is installed to assist them on their journey to their offshore destination. The Wick site is fully equipped with vehicles/plant/heavy lift pipe layer side booms and only limited equipment is hired in as required.” [6]

The railway uses the most unusual motive power for a railway: a pair of ocean-going tugs. The pipe sections are taken to Georgemas Junction by rail, and then taken by road to the fabrication site. The pipeline is assembled on bogies and each long section is towed along the railway and into the sea, where a third tug is hitched to the other end of the pipe toprovide stability as the pipe is towed out to sea. [4]

Ian Budd explains: “This isn’t a railway in the normal sense. It’s purpose is the fabrication and launching of incredibly long sections of pipeline, manufactured by Subsea 7, for use by the oil industry under the sea. There are no carriages, locomotives or wagons, just tracks and bogies, traction being provided by a tug at launch time with a 125 tonne Capstan winch at the landward end of each of the long tracks to control back tension. The normal, metre gauge, railway tracks end at the edge of the beach, the pipeline ‘train’ crosses a recovery pit into which the bogies on which it has been rolling are released for recovery. The ‘train’ completes its journey into the water on a 240m ‘slipway’ which is like a railway track but with built-in guide rollers.” He has written an excellent short post for The Friend oif the Far North Line. [1]

Ian Budd goes on to say: “The launch process takes 12 to 36 hours, depending on the bundle length. Tugs (usually 2) with a pulling power of up to 400 tonnes are attached by cable to the leading towhead. The bundle is then towed out to sea until the trailing towhead is 1.5km from the shore. At this point the site winch is disconnected and the trailing tug hooks up to the trailing towhead cable. During the launch tidal conditions and weather are monitored, and tug positions adjusted, to ensure that the bundle remains aligned to the launchway. Whilst in transit these assemblies are the largest man-made moving objects on the planet!” [1]

So there is the answer to my second question!!! … The longest ever object moved by rail is 7.7km long!!! This is also, I believe, the only railway where the primary motive power is seaborne!!! 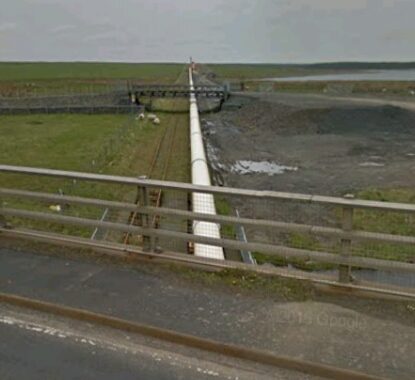 The two images above are  taken looking North on the A99, 6 miles north of Wick.

The adjacent image looks West from the same location.

The image below looks East also at the same location on the A99.

Below that are a few images from other sources. 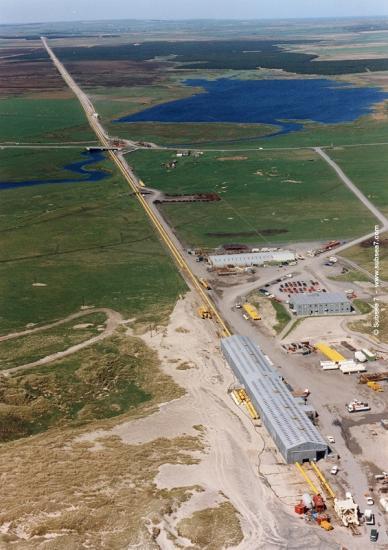 A 7km pipeline bundle is towed from its fabrication site at Wick, Scotland. The bundle integrates the required oil and gas, water injection and gas lift flow lines with the control system for a subsea development, and assembles them within a steel outer carrier-pipe. Two powerful leading tugs will tow the bundle with a tug at the rear supporting the tail-end. A guard boat will lead the convoy, accompanied by a survey vessel for checking the bundle en-route to its subsea destination, typically 200-300 km away © Subsea 7. [8]

The adjacent image shows the full length of the site. [8]

A pipeline bundle in production. [9]

The final item in this post is a video of a launching from the site.

2. https://uk.railway.narkive.com/UslsTwqI/railway-at-westerloch-near-wick, accessed on 11th May 2019, sadly, apart from the streetmap link, all the links on this page no longer work.