In 1948 KURH became part of the East African Railways Corporation, which added the line from Kampala to Kasese in western Uganda in 1956.[1] and extended to it to Arua near the border with Zaïre in 1964.[2]

There is good coverage of the station on the earlier post about the line from Nakuru to Kisumu …..

The images immediately below show the Passenger Railway Station at Nakuru in the 21st century – they are sourced as follows – the first from Google Maps and the following three from Google Streetview. ….

Nakuru Passenger Station – to the Northwest of the station, the line passed immediately over the Nakuru ring-road before swinging round to the West, (Google Maps).

View from the Road to the East of the Station, (Google Streetview).

View from the Town Centre roads to the South of the Station, (Google Streetview).

View of the main Station Building from the West, (Google Streetview).

There are a number of sites on the web which have pictures of locomotives at Nakuru Railway Station. These include: …

And, between Nairobi and Nakuru, the Class 58 had in turn been replaced by Class 90 1-Co-Co-1 diesels built by English Electric. Malcolm McCrow has a number of pictures of these locos on his website. [6]

Malcolm’s website has photographs of Class 90 diesels at Nakuru. These include Class 90 No. 9010 waiting to take over from the Class 58 above which brought the train from Kampala. Then waiting for the right of way for Nairobi. [6]

The website also has a photograph of No. 9008 at Nakuru at the head of a Kampala to Nairobi/Mombasa courtesy of James Lang Brown. [6]

There are also two pictures of Class 87s at Nakuru on Flickr: …

Other locos at Nakuru can be seen at Nakuru:. …

A few pictures of locos at rest in the MPD.

The satellite image below show both the MPD and the Nakuru Sidings.

After leaving Nakuru marshalling yard, trains travelled east to the junction with the Kisumu line. After that junction the line turned north through Kiamunyi and then west to Menengai Railway Station which is close to Barclays Airport and some distance from the volcanic crater of the same name which is actually due north of Nakuru. The adjacent image is a very early picture of Menengai Railway Station building.

The Menengai Crater is located on the floor of the Rift Valley. The volcano formed about 200,000 years ago and the prominent 12 x 8 km caldera formed about 8000 years ago. The caldera floor is covered with numerous post caldera lava flows. The Menengai volcano is considered one of the best-preserved Krakatau-style calderas in the world.

Menengai has very little sediment in the caldera which is a thick mass of lava boulders and inaccessible ridges. Volcanic activity continues and is used for geothermal power generation. The Menengai Creater is located 10 km (6 mi) north of Nakuru. [11]

After Menengai, the railway continued in an approximately westerly direction to Rongai which lies 30 km west of Nakuru. It is about 10 kilometres north of Elburgon and 15 kilometres east of Molo, names recognisable as stations on the Kisumu line. The town lies 1912 m (6272 ft) above sea level and has a population of 20878.[12]

Initially travelling in a west-northwest direction, the railway swings round to the north as it reaches the next station/halt on the route, Visoi, just before leaving Nakuru County and entering Baringo County.

The line then heads to Esageri, meandering around to follow the contours, and on to Sabatia.

The line snakes around from Sabatia to Maji Mazuri, circling the north side of Koibatek Forest.

Maji Mazuri is a settlement in Kenya’s Baringo County along the Makutano-Ravine-Kampi Ya Moto highway. This is the most southerly tip of the greater Baringo area. It neighbors Kericho’s Londiani and Nakuru’s Kamara areas. The settlement was formed by migrants who used to work in the Koibatek Forest but were either retrenched or retired at one time. As such Maji Mazuri is home to people from different ethnic groups of Kenya.[13]

The line reaches Makutano  in a meandering route close to the B53 (D314) road. By now the line is,for a very short distance, back in Nakuru County. The map below shows the route of the line and the County boundary. It also shows, to the north of Makutano township (and back in Baringo County), the second spiral on the line from Mombasa to Kampala. The third is just a short distance beyond the next station, Equator.

A Kampala bound School Train somewhere in the Highlands – possibly west of Maji Mzuri. The dining car is the fourth coach from the front of the train; the third coach is probably a kitchen car, (c) Malcolm McCrow. [6]

The spiral is also shown on the adjacent satellite image – at the top of the picture next to A104 road to Eldoret. Sadly, in 1994, I think I missed this and the next spiral because day had turned to night at this point on the journey.

Pictures of the spiral seem to be in short supply. The one immediately below is of the royal train negotiating the spiral. It was carrying the Queen Mother to Eldoret. We will discover the remaining spiral on the line when we look at the length between Kampala and Kasese in due course. [6]

The spiral at the Equator north of Makutano. [14]

The station at Equator is shown in the embedded Getty Images picture above. It is better documented, in photographs, than others we have already passed, particularly on Malcolm McCrow’s website. [6] He includes at least three photographs – one shows the platform sign for the station and the unique Equator marker. Malcolm McCrow says: “The equator runs across the platform at Equator Railway Station. A “Whistle” diamond sign is just visible at the end of the platform. Generally the Mail Train and School Trains did not stop at Equator, but a first class ticket holder on a Mail Train could request a halt at any station where a run through would be the norm. School Trains would stop if booked in advance.”

Alongside a further picture, this time showing the special marker sign and the line of the Equator in white paint, McCrow comments: “Observant passengers would have noticed different equator signs along the trackside as the train wound its way over the equator at least three times. It has been suggested that the train crossed the equator 5 times, but only three points seem to be marked by signs.”

The station building can be seen in the background in the next embedded image from Getty images: ….

There is a better image of the Station building on Malcolm McCrow’s website  which has been provided by James Lang Brown. [6].

The map and satellite image below show the station at Equator and the second spiral, of which I can find no photographs.

The picture below is a Kenya-Uganda Railway (KUR) Postcard showing KUR Class EC1 still in grey but sporting East African railways and Harbours (EAR&H) Class 50  number board as it heads a Nairobi bound freight over the summit (c) EAR&H. [6]

Malcolm McCrow’s website also provides a shot of the summit marker board viewed from a “Nairobi-bound School Train taken from a second class coach behind the only first class one in the consist.” [6]

The railway ran parallel to the Nakuru-Eldoret (A104) road, north from the spiral, over the summit, to arrive at Timboroa. Timboroa is just within Baringo County, very close to the border with Uasin Gishu County.

From Timboroa, the railway travelled north through Ainakboi, Tumeiyo, Kipkabus and Kaptagat Stations. Norman and Irene Campbel provide a picture of a school train stopped at Kaptagat in 1961 on Flickr. [24]

Alongside his own photograph of Kaptagat Station, Malcolm McCrow comments: “Trains travelling East would leave Eldoret in the dark, and arrive at Kaptagat just after dawn.” [6]

The adjacent satellite image shows Kaptagat Station which is in a loop in the line which belies the direction of travel. The railway is now travelling in a Northwesterly direction and continues from Kaptagat to Cheploske and Plateau.

After Plateau, one station remained, Sosian, before trains reached Eldoret. Eldoret is the fifth largest city in Kenya, second only to Kisumu in Western Kenya and the end of this stage of our journey!

The first train picture below is a very early image from colonial times. The map below shows the track layout at the Station. 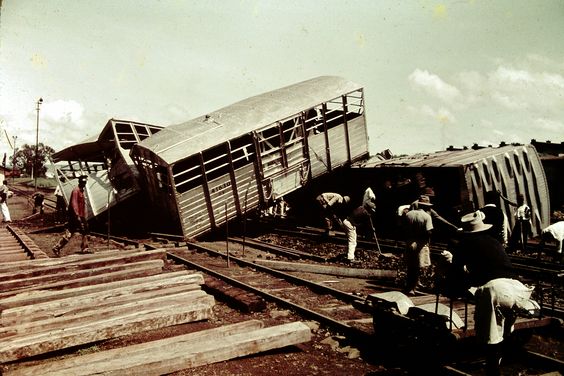