Nairobi is a city that was created by the Uganda Railway! There was nothing on the site of the present capital city of Kenya before railway construction started in the last years of the 19th Century.The first two shots show the location as the settlement was beginning to grow.

Train leaving Nairobi for Mombasa in 1900.

Nairobi was founded in 1899 by the colonial authorities in British East Africa, as a rail depot on the Uganda Railway.[1] The town quickly grew to replace Machakos as the capital of Kenya in 1907. After independence in 1963, Nairobi became the capital of the Republic of Kenya.[2] During Kenya’s colonial period, the city became a centre for the colony’s coffee, tea and sisal industry.[3]

The present station is utilitarian and functional and shows none of the colonial splendour of some Indian railway stations.

The Nairobi suburbs are served by commuter trains. Not all as heavily loaded as that shown below.

There are daily services from Nairobi Suburbs into the Central Station.[11]

An interesting project saw officially sanctioned graffiti replacing unauthorised graffiti. Trains had been badly disfigured but of greater significance was the fact that in the days around  elections in 2007,  the balloting ignited deadly ethnic tensions. Weeks of violence left more than a 1,000 people dead and hundreds of thousands of Kenyans were left homeless. The ethnic tension was particularly toxic in the Kibera, one of the largest slums in Africa, in the heart of Nairobi. It is the focal point of rival ethnicity and unemployed youth.

Hoping to avoid a repeat of that violence in the election process in 2013, a Brooklyn artist and educator Joe Bergner launched a project that used graffiti art to encourage peace and unity against ethnicity and political groups.

The project is called ‘Kibera Walls for Peace’.  Peace murals were painted by local youth around Kibera. The project approached and worked with Rift Valley Railways to use the commuter trains as a canvas to spread peace messages and togetherness. The railways had been a major target in the previous post-election violence, especially the route through Kibera. In 2007, mobs of young people tore up the train tracks that connect Kenya and Uganda and sold them for scrap metal.

The idea of having graffiti artists come on board to spray the 10 coaches of a commuter train was an idea well received, since most of the Kibera dwellers use the commuter train to and from work. It’s their main means of transport. The train travels through the massive Nairobi slum of Kibera advertising peace. A portrait of Martin Luther King Jnr and the Kenyan flag grace the last coach. The message reads from the front to the back and looks like a sentence that’s beautifully crafted. Tuwache ukabila…tuwache ubaguzi…tuishi kwa amani.[12]

These next few pictures cover the good sidings adjacent to the station.

Sidings close to the platforms.

The same sidings from a different direction.

Another Class 60 heads a freight out of Nairobi Yard for the Nanyuki Branch, © James Waite.[9] 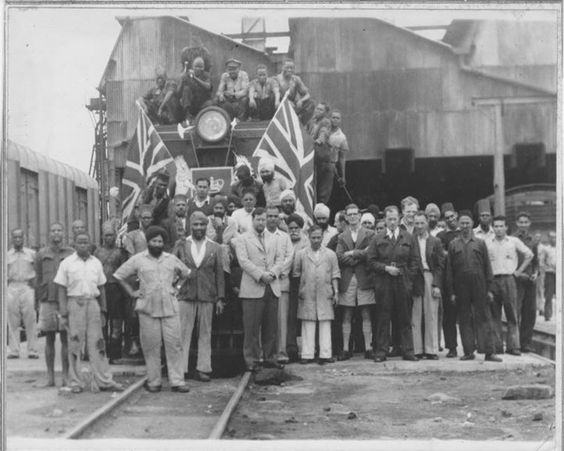 Staff at Nairobi MPD on the occasion of Princess Margaret’s visit in 1956.[14]

I visited Nairobi Railway Museum in 1994. It was in a relatively run-down state and many of the locomotives stored there were rusting away. These next 13 pictures are from 1994 and were taken as slides. The quality is not good but the ability to wander around next to some of the remaining Beyer Garratt locomotives was an experience to remember.

The Museum has changed a bit since 1994, and there are now even some of these machines back in steam on the railways in Kenya.

And finally ….. a drone’s eye view of the Museum in the 21st Century!