I still have a number of older railway magazines to read through. The pile still seems to be growing!

The November 2003 issue of Steam Days has an epic article about Skelton Junction. [1] Skelton Junction is in Broadheath which is just North of Altrincham. I picked up my copy of magazine in August (2019).

Broadheath was my home for the first five and a half years of my life. I can remember the railway at the bottom of the garden and also vaguely remember my grandparents waving to me from their train as I stood in the back garden of our home – 112, Lindsell Road, Broadheath, Altrincham.

The featured image for this post is taken from RailMapOnline. It shows the immediate area to the North of Altrincham. [2] The same website shows, below, the distance of our home from Skelton Junction. [2] … Not that close, but enough to provoke my interest as I read the article.

No. 112 Lindsell Road in the early 21st Century (Google Streetview).

No. 112 Lindsell Road in the early 21st Century (Google Earth) the disused West Timperley to Glazebrook line is visible to the top right of the satellite image. 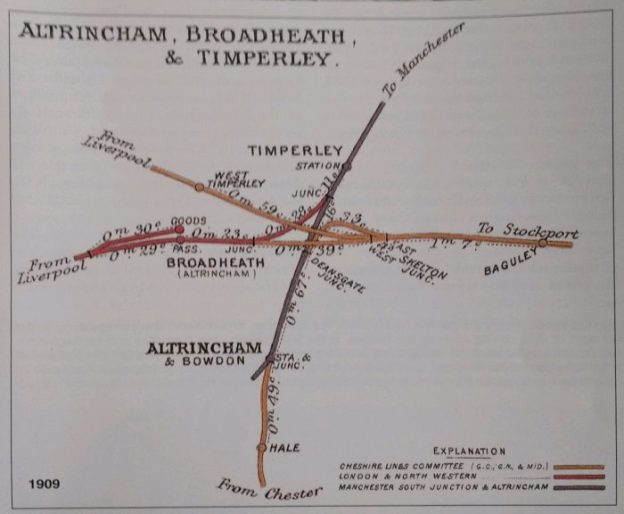 Railways arrived in the vicinity in 1849. An Act of 21 July 1845 had incorporated ‘The Manchester South Junction & Altrincham Railway’ (MSJ&AR). It opened for traffic on 28th May 1849. I was interested to note that the development of the railway sysytem in this area can be linked back to shared decisions in which The Sheffield, Ashon-under-Lyne and Manchester Railway was involved!

This “line sprang from a desire by the Manchester & Birmingham and the Sheffield, Ashton-under-Lyne & Manchester railways to reach Liverpool. Thus was taken on board by the two companies the so-called South Junction Railway — a line about one mile long from Oxford Road in Manchester to a junction with the Liverpool & Manchester Railway at Ordsall Lane in Salford, immediately west of Liverpool Road station. Given the line’s original concept, the branch west to Altrincham was an afterthought. This new railway would parallel the Bridgewater Canal for much of its course, and inevitably become a competitor for its traffic. Eight miles long, the MSJ&AR could be fairly said to have created many of the suburbs through which it travelled.” [1: p687]

All of the suburbs between Altrincham and South Manchester did not exist before the building of the line – Old Trafford, Stretford, Sale, Brooklands, Timperley. They all only became viable as dormitory areas when public transport became adequate to convey the middle classes into Manchester. The building of this line also acted as a catalyst for the construction of further lines. many of these lines came early in railway development across the country:

“John Skelton sold some of his … land to the Stockport, Timperley and Altrincham Railway Company in the 1860s to build a link line between Stockport and Warrington, and his name is preserved in Skelton Junction.” [9]

An OS Map extract showing Skelton Junction and Broadheath in 1898. There is no sign of Lindsell Road at this time. [4]

West Timperley Station was about 3/4 mile to the West of Skelton Junction, just off to the Northwest of the map above. It was on the Cheshire Lines Railways’ (CLC) Glazebrook to Stockport Tiviot Dale Line. The length of the line through the station opened to goods from Cressington Junction to Skelton Junction in 1873 with passenger workings beginning later in the same year. The line gave the CLC their own route to Liverpool. Previously they had had to operate over LNWR metals between Skelton Junction and Garston.

“Partington (and by inference, West Timperley) was served by local trains running between Stockport Tiviot Dale and Liverpool Central with some short workings going only as far as Warrington Central. Express services to London St. Pancreas and other destinations along with a steady stream of goods workings passed through the station.

Situated on an embankment [West Timperley] station had two platforms which linked to the road by slopes. Booking and waiting facilities where located on the platforms with the main facilities on the Stockport platform.

The station remained part of the Cheshire Lines Railway until 1948 when it became part of British Railways London Midland Region. The station closed to passenger services on 30.11.1964. Regular passenger trains continued to pass through the station site until 1966 when Liverpool Central closed to long distance services. The line remained a busy route for goods services until 1984 when the bridge over the Manchester Ship Canal at Cadishead closed. The line was cut back to Partington and singled. Goods services operated along this section of line until the 10th October 1993. Today [2006] the platforms at West Timperley are still extant and the single line remains in situ.” [5]

West Timperley would possibly have been the station my grandparents used when they came to visit!

There is discussion of Skelton Junction and surrounding lines on a number of threads on http://www.railforums.co.uk. [6][7][8]