We corresponded a little about the date of the landslip and I think we now believe that it happened as part of a major incident which occurred in November 1994.

On 5th November 1994 an extreme flood event caused the lowest and the second-lowest dams on the Var to collapse. The flood wave inundated parts of Nice, including Nice’s international airport which is situated near the river mouth. It was out of service for several days. The airport lost the business of 50,000 passengers, with damages running up to an estimated 4.5 to 6 million euro. Elsewhere roads like the RN202 were cut, power and telephone lines were interrupted, and three people died and four disappeared. [1] This estimate of lives lost is low compared with some, for instance HydroEurope say that 70 people were estimated to be killed, with large scale infrastructure damage and economical losses from the closure of the airport. The economic damage is estimated at 550 – 800 million Euros. Of the three most recent flood events the flows of 1994 were an order of magnitude higher than the others – 1994 (3680 m3/s), 2011 (1330 m3/s), 2016 (1280 m3/s). [2]

My blog: https://rogerfarnworth.wordpress.com/2018/04/06/nice-to-digne-les-bains-part-1-nice-chemins-de-fer-de-provence-57, provides a number of pictures of the damage done to the watercourse, it revetments and its structures. Part of the problem has been the gradual encroachment into the valley of the Var by various land reclamation schemes over the years. [3]

But these events are not a recent penomenon. The Observatoire Regional des Risques Majeurs (ORRM) En Provence-Alpes-Cote d’Azur has reported on a series of similar events over the past 150 years. [4] These events have occurred across the whole of the southern alps – Sisteron in 1886; Valette (Ubaye Valley) in 1982; Annot in 1994 and 1996; Rochaille in 2001; Villard-des-Dourbes in 2002; Barles in 2008, are all events mentioned by the ORRM. Their website includes the following photograph taken at Annot in 1994. [4]

As we have already noted, the events of November 1994 were of an order of magnitude greater than had been experienced in the catchment of the River Var in the century or so before 1994 and in the years after. Significant structures were destroyed, such as the Pont de Gueydan, immediately below.

The main A8 was cut by the river. The railway was cut at various points and it was 18 months before it re-opened. At the time there was a significant risk of complete closure of the line. The image below shows one of the ‘elephants’ along the line which was destroyed and had, along with the road and river embankment, to be rebuilt. 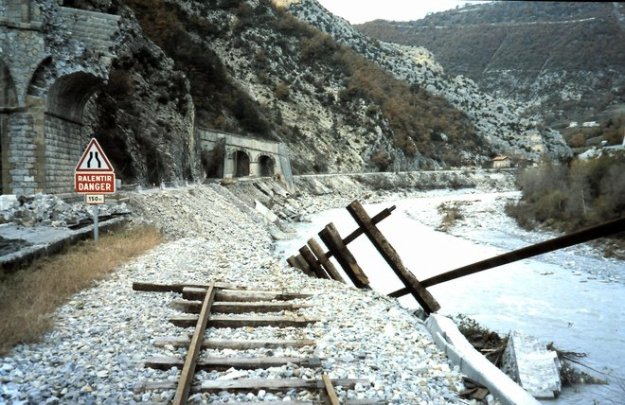 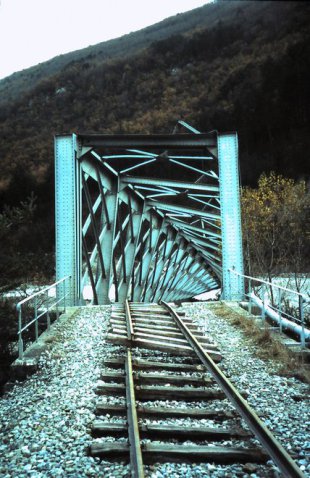 More damage to the A8 and the railway line.

The bridge at the mouth of the River Vesubie was destroyed.

In 1994 a new highway was planned, situated in part on the right bank of the Var. This would result in a further reduction of the river bed in the order of 10%. The plans met with strong opposition from the riparians, who fought the proposed highway in the Administrative Court.

A decision was taken in 2001 to further investigate the road alignment. The highway was eventually built along a modified itinerary and under a different name. [1]

If anyone knows more about flooding and landslides that have affected the Nice to Digne line it would be good to hear from you.