The featured image above shows one of the construction trains used for the extension from Gulu to Pakwach,© M. Hardy-Randall. [8]

Our journey in this post begins at Gulu and when we leave the town we head west towards Pakwach. We start this post with a couple of photographs taken in Gulu. 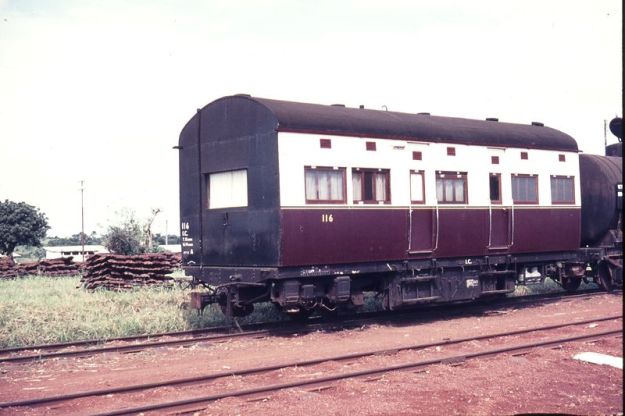 Level Crossing tarmacked over at Gulu, taken around 2010. [2]

Leaving Gulu Station we head for Pakwach. Thanks to Thomas Kautzor, I now know that the stations between Gulu and Pakwach were: Paliri, Bwobo, Aparanga, Pai Halt, Lolim and Pakwach East. Finding evidence of these stations has been difficult. Part of the problem with identifying locations is that the station names seem not to relate easily to the named locations on maps.

Out of Gulu, the line heads initially in a generally westerly direction and the image below is typical of the countryside through which the line travels.

The trajectory of the line changes when it reaches Alelele. It heads in a south-westerly direction towards Alero.

After Alero, the line travels in a south-southwesterly direction through Nwoya and on through Patit and Patera to Aparanga where reports indicate that there is a railway station of sorts. [3] It can be just picked out centre-left on the satellite image below. I have found no photographs of the station/halt.

The next station I can find any possible location for along the line was some distance further to the West at Lolim. On the way to Lolim, the railway and the Gulu-Arua Road followed almost the same course through, or close to, Lalem, Purongo, Wianomo and Wianaka.

Near Wianaka, the road skirts the northern edge of the Murchison Falls National Park. The railway predates the formation of the National Park and so transgresses its boundaries, (see the left hand side of the map above).

Going on to Lolim, while the railway snakes around, the road from Wianaka follows the Park boundary, (as above). The most likely location of the Railway Station at Lolim is shown in the satellite image below, which is just off the left of the map above. Again, there are no photos of the station and there is little evidence on the satellite image to confirm its location.

From Lolim, the railway and road continued on a relatively similar alignment. The railway follows the contours to minimise gradients, the road takes a more direct route. Both meet short of the bridge over the Albert Nile near Pakwach.

The second couple of photographs show the bridge from along the banks of the Albert Nile. [7][2] 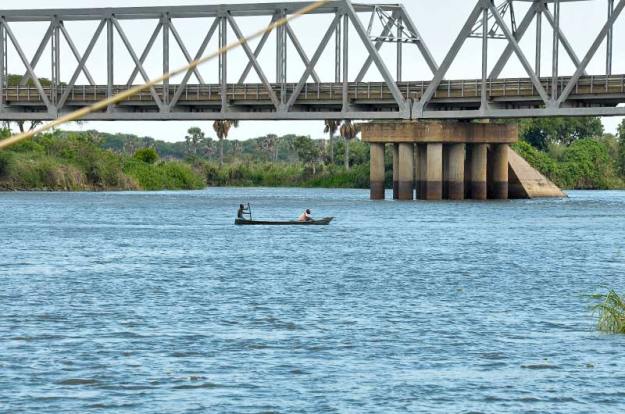 Arriving at Pakwach the railway turned to the West off the bridge. At present, the line stops at the end of the road/rail bridge. The line passed through the centre of Pakwach and was extended, in 1969, to Arua.

All evidence of that extension has possibly disappeared under the formation of the Pakwach-Arua Road. There are short sections where the road alignment does not seem to have covered the old railway formation. One example is shown in the adjacent satellite image. In the Mbaro area, where, over a short length, the road travels north-south before reaching Oryang, the railway alignment can just be picked out to the east-side of the road.

However, this route has some questions attached to it. … When the Pakwach-Arua Road reaches Nebbi it turns through an sharp, acute angle at a roundabout. The alignment of the road in Nebbi is vary unlikely to be the alignment of the original metre-gauge line. There is a possible cut-off route for the line which avoids Nebbi. Its alignment can be picked out on the satellite image below. It starts on the eastern edge of the image close to the village of Namrwodo and runs just north of west across the image before turning north-west and then meeting the Gulu-Arua Road once again.

We know that the railway reached Arua in 1969. It may have taken this route or another route and I cannot find enough evidence to establish the actual route at present Nor can I identify the site of the Station in Arua. This is an unsatisfactory end to the story of this line. Perhaps in due course I will find more information, or possibly someone who has more information will come forward.

In the next Uganda Railways post we return to Tororo, and begin to focus once again on the mainline to Kampala.