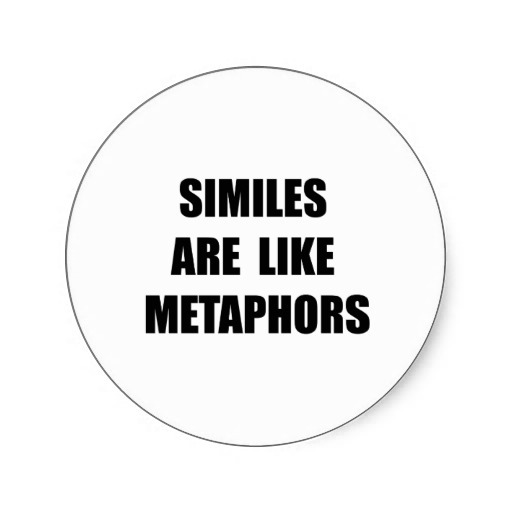 The English language is full of great figures of speech and metaphorical language. Metaphors and similes are used to express concepts that might be too complex for the English language. In other words, a specific word may not exist to represent a feeling/emotion.

Describing ideas using similes and metaphors provides an opportunity to conjure a range of emotions when explaining a particular idea. People have a simile or metaphor for almost everything.  Colourful colloquial language is common in many parts of the UK. There are a few examples on my previous post …

Yet when we want to be more formal, we drop the similes and metaphors, we favour clear, propositional language over more colourful metaphorical language. The English legal system is dependent on the letter of the law, our legal documentation is very carefully worded to avoid as much ambiguity as possible.

So, when it comes to communicating the truth, Westerners prefer propositions rather than ‘fluffy words’.

“Because we are somewhat uncomfortable with the ambiguity of metaphors, we tend to distil propositions out of them. We want to know what they mean, in categorical terms. A philosophical description of God (“omni-present”) is better than an anthropomorphic one (“his eyes roam to and fro throughout the land”). Or so we think. This is why books on Jesus often talk more about the facts of his life than his parables. To us, things like metaphors and parables sometimes seem like unnecessarily frilly packages for a hard truth. We want to get past the packaging to the content; we want to know what it means.”[1]

This propensity to prefer propositional language over metaphors and similes leaves us at something of a loss when we read the Bible. Bible authors record important truths in similes, metaphors, parables and other, possibly ambiguous, language.

Different types of literature have different ‘rules’, so we expect different things when we read poetry rather than prose. Historical narrative is likely to use a different style to the telling of a parable or story. These distinctions are easiest to recognise in our own language. We can easily tell the difference between poetry and prose. It is a lot harder to make these distinctions when we are reading texts from another culture and from many centuries ago.

Some forms of literature are completely alien to us. Some books of the Bible are ‘apocalyptic’ in style, books such as Revelation and parts of Daniel. We have nothing in our own culture with which to compare these. “Such books reveal or unveil the mysteries of God about the future and make heavy use of symbolism, often involving numbers and animals. The present time is described as dire, and just when it appears things cannot get worse, God intervenes and rescues his people for a glorious future. While we may understand the big picture, the details are very confusing for those unfamiliar with this genre. We struggle to make sense of horsemen and bowls of wrath and strange hybrid animal creatures. Right in the middle of a natural disaster, a guy rides by on a horse. What’s up with that? This genre is foreign to us.”[2]

In this case, we know we don’t know, so we are prepared, or should be prepared to be careful in the way in which we approach the text. It is less easy to make these distinctions elsewhere in the Bible. The danger with making distinctions, is that we follow our instincts and relegate metaphorical language to a secondary place, we search out the more concrete statements and rely on them as primary. It makes the most sense to us to do so. Or we transpose metaphorical language into propositional language.

Biblical writers “often preferred to speak about spiritual things metaphorically. And this made earlier interpreters nervous because ancient readers of the Bible knew that there was a lot at stake in a metaphor. The original Hebrew text of Exodus 15:3 reads, “The Lord is a warrior.” The context is the Song of Moses. The Israelites have just filed through the Red Sea to safety and Pharaoh’s army has drowned in the tide. The Lord, Moses implies, is a more powerful soldier than all the battalions of Egypt. But the Greek translators of Exodus were uncomfortable with this image. So they did just what we tend to do: they translated the verse as a proposition. In the Septuagint, the verse reads, “The Lord . . . shatters wars” or “bring[s] wars to naught.’ Instead of portraying Yahweh as an armed and bloodied soldier, they highlighted a particular implication of his prowess. While they might be right—perhaps the best soldier is the one who brings war to an end—the Septuagint interpretation narrows the meaning of the text. Resolving the tension of the metaphor actually diminishes the breadth and application of the text. “[3]

Metaphors and other artistic expressions can also say more with less.  Just a couple of examples:

He had a broken heart.

She had cold feet.

When we hear these phrases we know not to take them literally and they carry with them a wealth of meaning, if we were try to be more ‘factual’ in our description of how these people are feeling we would either miss something of the breadth of meaning intended or focus down onto just part of what the metaphor invokes.

In addition, the use of metaphors often connects central truths in Scripture. Our parish in Ashton-under-Lyne is called the Parish of the Good Shepherd.

The concept of God as shepherd runs throughout the Bible. No one believes that God is actually a shepherd, we use the concept as a useful metaphor. For many of us it is a very significant one. We love Psalm 23. In Ezekiel 34, God describes himself as the Good Shepherd and the people’s leaders as bad shepherds. So, when Jesus claims, “I am the good shepherd” (John 10:14), what is he saying?

Perhaps first he is identifying other as ‘not good’! But the reference back to Ezekiel is unmistakeable. His audience realised this straightaway. Jesus uses the metaphor to identify himself with God and his listeners pick up rocks to stone him “for blasphemy, because you, a mere man, claim to be God” (John 10:33).

In Scripture, these connections between metaphors are significant. “It was Abel, the shepherd, whose offering pleased God. Saul was a bad king—and called a bad shepherd—but King David was a good king who shepherded the people of Israel (1 Chronicles 11:2). If we simply distil the propositions out of each of these accounts (“The Lord provides everything I need”; “Jesus lays down his life for us”; “Saul was a bad king”; “David was a good king”), we miss the connection. The metaphor is not just a frilly package. In this case, the package is actually the bridge connecting all these ideas. Real misunderstanding is at stake.”[4]

Biblical scholars in the 19th century argued that Jesus never made any claim to be divine. Their problem was that they ignored Jesus’ use of metaphorical language. “What went without being said in Jesus’ time is that metaphors bring with them the whole weight of the biblical witness—Torah, Wisdom and the Prophets.” [5] … Jesus’ listeners recognise immediately that he is drawing together a series of different strands of Scripture and they react accordingly.