We start with some useless trivia, or some vitally important information about Kisumu. Which it is depends on your personality and perspective! This is only a very short post about a branch line which has very little traffic on it, the line from Kisumu to Butere.

Kisumu, officially known as Kisumu City (and formerly Port Florence), is a Kenyan inland port city on Lake Victoria and the capital city of Kisumu County, Kenya. At an elevation of 1,131 m (3,711 ft), the city-county has an estimated population of 968,879, while the metropolitan region comprising the city and its suburbs and satellite towns of Maseno, Kondele and Ahero was estimated at over 1 million in early 2017. It is the third largest city in Kenya after the capital, Nairobi, and the coastal city of Mombasa. Kisumu is the principal city of western Kenya, the immediate former capital of Nyanza Province, the headquarters of Kisumu County and the proposed headquarters of the Lake Region Economic Block, which is a conglomeration of 13 counties in Western Kenya. It is the largest city in western Kenya and the second most important city after Kampala in the greater Lake Victoria basin.

Kisumu port was founded in 1901 as the main inland terminal of the Uganda Railway named “Port Florence”. Although trade stagnated in the 1980s and 1990s, it is again growing around oil exports.

As we noted in the last post in this series, Kisumu Railway Station is currently abandonned, although this may change in the relativel;y near future

At the turn of the Twentieth Century, Kisumu was chosen as the destination for the Uganda Railway. Kisumu is not and was not in Uganda. But it was the port on Lake Victoria from which steam ships sailed to Port Bell for Kampala. The Railway did not reach Kampala until the 1930s. After this the mainline to Kisumu became just a branch from Nakuru. In the mid-sixites, two rail ferries – the UMOJA and the UHURU – were commissioned for lake service, principally between Kisumu, Jinja and Mwanza. Here one of them prepares for an evening departure, (c) James Waite. [2]

Before we set off down the short branch to Butere. Here are a few photos of locomotives at Kisumu from the middle of the 20th Century. All are taken by James Waite and used with his kind consent. [2]

No. 3101 sets off for a day’s work.  It is perhaps surprising that, as a Kenyan locomotive, it has retained its BAGANDA name plate (c) James Waite. [2]

We leave Kisumu Station travelling for a very short distance back down the line towards Nairobi. Just beyond the station throat and alongside Obote Road the Butere branch leaves the mainline.

The mainline heads north and the branch heads west towards Kisian, running on the North side of the B1 road.

Tribal Class No. 3130 (formerly Karamojong) departing Kisumu with one of the three daily services to Butere, (c) James Waite. [2] 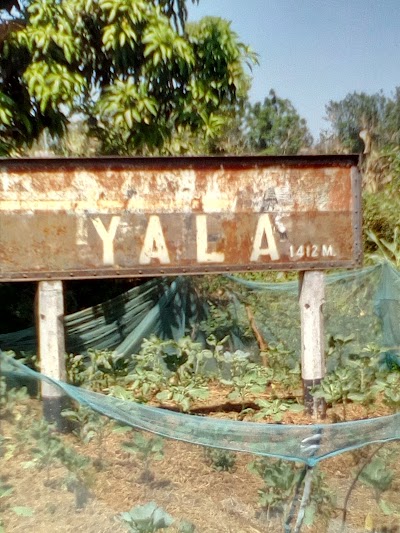 We travel on through Lela Station and very quickly after that through Maseno Station. A short distance further on and the train passes through Luanda Station, and then on over the Yala River to Yala Railway Station. Sadly, there are very few pictures of these stations available on the internet, but one great source is Rob Dickinson’s site. [4]

Beyond Yala, the line travels just a short distance north to Namasoli and then on to the end of the line at Butere. Butere was, like many other town’s in the area heavily dependent on sugar cane.

Apparently not making deliberate smoke for the camera, Tribal Class No. 3130 heads across the equator towards Butere, (c) James Waite. [2]