Whenever I hear today’s Gospel reading, I can feel myself cringing in embarrassment at the situation that the wedding guest creates for themselves.

I can just imagine all the other guests muttering to one another: Did you see that?  The cheek of it ‑ thinking that they should sit in the best place!  Surely, no‑one in their right mind would do such a thing?  After all, we all know our place and we’d never put ourselves in such a situation, would we?

I can also imagine the shame that the guest must have felt having been moved from their chosen seat to the worst place ‑ in full view of all the other guests.   I guess they wished that the ground would swallow them up, as they went red in the face and started to stammer.

This parable ‑ seemingly about the etiquette of dinner invitations ‑ turns into a story about shame and honour.  Luke draws us into the story by choosing a scenario that we can identify with ‑ we’ve all been to wedding feasts and we all know the social rules that go with them.  Bridal party on the top table ‑ everyone else in the rest of the room, carefully placed so all possible conflicts are avoided and no‑one is left on their own.   We know the rules and we are expected to stick by them ‑ so how could anyone be so foolish, do such a shameful thing as sit in the wrong place?

Shame is a very powerful emotion ‑ accompanied by often visible signs ‑ and it is one that we seek to avoid.  It can bring very real distress and pain.  Shame can also be a healthy reminder to us that we’ve transgressed, that we’ve done something wrong. To avoid being shamed, we have to think about doing the right thing, about being honourable. 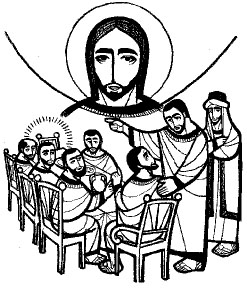 And this is where Luke takes his parable ‑ by describing the honourable way to behave when you have a wedding invitation.  Start off by assuming that you have been allocated the worst place and you might just find that you are rewarded with a better seat. And Luke wraps up the tale with these words of wisdom: “If you put yourselves above others, you will be put down.  But if you humble yourself, you will be honoured.”

This story is worldly-wise ‑ perhaps it echoes advice in Proverbs: “Do not take a place among the great; better to be invited ‘come up here,’ than be humiliated in the presence of the prince.” The parable is a neat and slightly crafty lesson on how to get on in the world.  And yet…….  As with all of Jesus’ parables it has a meaning on many other levels.

There are several lessons here for Christians about knowing one’s place as a Christian disciple.  But first a few words which come from a different direction. A true story. A friend of mine had not been to church in a very long time. The first time she came to church with her family she chose to sit near the front of the church – it was a little odd, for no one came to sit with them until just as the service was starting … She enjoyed her first service in church – the singing was wonderful and the family decided to come again. The next Sunday they took the same seats, the same people came to sit with them and again they enjoyed the worship. They started going to church regularly. It was only after they had been there a couple of months that one of the congregation came to them and asked why they were sitting in the choir stalls …

So many who come to church no longer know the right things to do, don’t understand why in Anglican churches we don’t use the front pews. Often I have seen new people sitting right at the front (in the best seats) then not able to work out what to do with their service sheets and hymn books and clearly feeling ill-at-ease, feeling shamed. How do we help these people to feel at home? It is so important. …

Having seen that the parable can be turned on its head. What are the other lessons here for Christians about knowing one’s place as a Christian disciple?

There’s a message for those in leadership.  Jesus was speaking to the lawyers and Pharisees when he told this tale and he wanted them to heed the warning about pushing themselves forward in the sight of God.  In Jesus’ day it was all too easy for the well‑off and the legally trained to imagine that they were superior in God’s sight to the poor and to those without the opportunity to study, let alone practice the law.  So he spoke to the powerful people in the Jewish faith ‑ wanting them to think about the way they related to other Jews.  This, of course, is also important for powerful Christians, such as church leaders (ordained or lay), to remember when they relate to other Christians.  Power and learning make no difference to the way that God relates to his children.

But Jesus spoke not just to the powerful and learned ‑ he also spoke to his disciples.  Perhaps you remember the story of James and John who were eager to take the top two places at Jesus’ right and left hand ‑ above everyone else.  They didn’t know what they we asking, because Jesus’ came in his glory not on a throne but on a cross and the places on either side of him were reserved for thieves.

James and John were rebuffed and reminded that this was not the aim of discipleship ‑ it was not for them to seek the highest places.   So to for us ‑ there is no hierarchy in our church, our parish, our Deanery, our Diocese  ‑ we are all brothers and sisters in Christ.  Yes, we have different roles and some of these roles mean that some people are more visible than others.  But as disciples, we all occupy the same place ‑ as God’s children, all equal in his eyes.  So this parable reminds us that we need to act with humility in the church.

There is however a wider message delivered by this parable and this would have been obvious for those in the world for which Luke was writing.   Within Luke’s lifetime, thousands of non‑Jews had become Christians.  They had entered, as it were, into the dinner party prepared by the God of Abraham, Isaac and Jacob.  Many Jewish Christians found this difficult, if not impossible to understand or approve.  They were so eager to maintain their own places at the top table that they could not grasp God’s great design to stand the world on its head.  They couldn’t see that their pride, their belief that they were favoured, blotted out God’s generosity to others and ultimately denied their own place as Jews in God’s plan for the world.

Because, in the end, if anyone reckons that they deserve to be favoured by God, not only do they declare that they don’t need God’s grace, mercy and love, but they also imply that those who don’t deserve it shouldn’t have it.  And perhaps this is the most challenging aspect of this parable ‑ a message for all Christians.  Whenever we act without humility and see ourselves as better than others, not only do we shame ourselves but we act dishonourably towards other people by seeking to limit their access to God’s love and God’s grace.  And where does that leave us in relation to God? For each of us needs the grace of God as much as anyone else.

So lets keep our eyes open for those who are new and who struggle with knowing the social rules of our church, let’s give them every help and support that we can. May this parable also prompt us to be aware of those times when we bring shame on ourselves because of our lack of humility.  May it also cause us to rejoice that God’s love is so forgiving that at the end we will all be invited to feast at God’s banquet.